Honda has revealed official teaser picture of the 4th generation of  Honda CRV 2012 new model of its popular SUV. The new CR-V has been spotted testing recently in the USA as it is about to be launched there by the end of year 2011. The new CRV will be launched in Europe in 2012 and it is expected to be launched in India in 2012 as well. The falling sales of Honda CR-V with stiff competition from BMW X1, Toyota Fortuner and other SUVs in this segment, a refresh in Honda CRV is much needed in India and Internationally as well. Apart form the 2012 CRV, the all new compact SUV from Audi, the Audi Q3 is also likely to be launched in India next year which will also compete with the new Honda CRV. 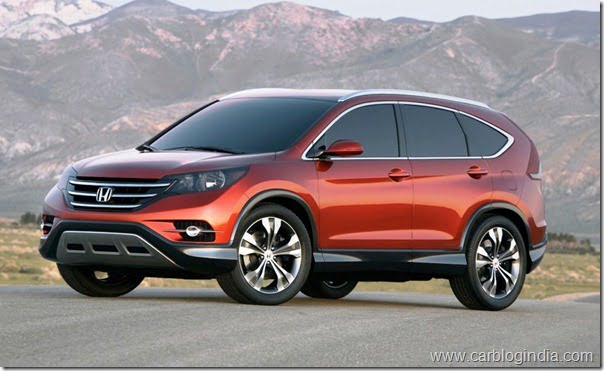 The front bumper of the new CRV has been risen further upwards integrating towards the grille and gives a more sporty look to the new CRV. The front fascia has also been enhanced with touches of chrome on the grille, new sleeker headlamps which slightly wrap around the sides, new bold and aggressive design.

The overall size of the CRV has also gone up, with the rear being more widely sculpted and sides also get black plastic finishing near the side bottom to add more sporty character to the aesthetics. The rear tail lamps also wrap around the sides and gives a stylish look to the rear of the SUV.

Apart from the cosmetic upgrades, the engine of the new models 2012 CRV has also been improved and will deliver better fuel efficiency compared to the existing version. Low fuel economy is one of the negative points of Honda CRV in the past, which seem to have been addressed in the new version to some extent.

The final production version will come on display in September 2011 at the Orange County International Auto Show in Anaheim, California, USA. So stay tuned for more updates when the car will be on a complete display. We will be able to bring you official interiors and exterior pictures from more angles. You can stay updated by liking our official Facebook page or signing up for our free email newsletter.