The performance biking segment India is heating up quite fast but there’s a certain class of people who like the Royal Enfield over any other bike company. Those folks were just treated to the Thunderbird 500 and if that was not enough, the folks back at RE are readying up the fastest RE bike, the Royal Enfield Cafe Racer 535 for a launch later this year. And today we have for you a picture of the bike being tested in India, and that too without a camouflage.

Cafe Racer 535, as its name suggests will be powered by a 535cc engine which will be a generation ahead of the 500cc Unit Construction Engine powering the current flagships in the company’s lineup. The bike will get a bigger throttle body and high lift cam shafts. The bike will feature a revised exhaust than the ones found in the RE flagships and the test mule seems to in the final stages of test runs. The second quarter of the year just began and the Cafe Racer might be launched by the time the fourth quarter ends. 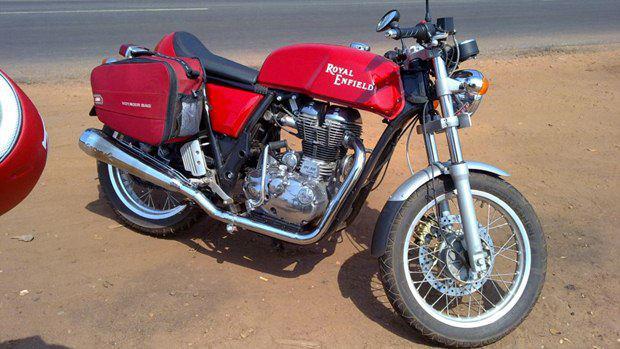 The Racer 535 even though will feature just 35cc more than the 500cc engines, is expected to develop somewhere around 35 horses and a peak torque of 45NM. These power figures are quite great seeing the fact that the engine receives a minor bump in terms of displacement. The powerful engine will be mated to a 5 speed manual gearbox and the bike will feature a sport stance unlike the laid back styling of the cruisers the company currently offers.

And now the price of the bike. The RE Thunderbird 500 costs Rs.1.59 lakhs (ex-showroom, Chandigarh) and since the Cafe Racer will sit above it, it is expected to be priced around Rs.2-2.25 lakhs. Now the Duke 390 is expected to come at a similar price tag so it will be a battle of the classic Cafe Racer and the modern streetfighter. It will be a single seater and I would like to be on the side of the former, which side are you on?