Yamaha India Motorcycles, the Indian subsidiary of the Japanese two-wheeler giant, plans to launch the Yamaha R15 V3 in India. The version 3.0 replaces the Version 2.0 in the entry-level performance segment of the Indian motorcycle market. The R15 V3.0 is already on sale in certain South Asian markets, such as those of Indonesia and Malaysia. At the first glance, the upcoming new Yamaha motorcycle in India looks like a slightly smaller YZF-R6. In comparison to the R15 V2.0, the new model looks considerably more attractive. But there’s definitely more to the new model. It also gets better specs and more features than the current model. Hence, here, in this post, we compare the new and old model in this new Yamaha R15 V3 vs old R15 V2 comparison to give you a good idea of how different these two are. 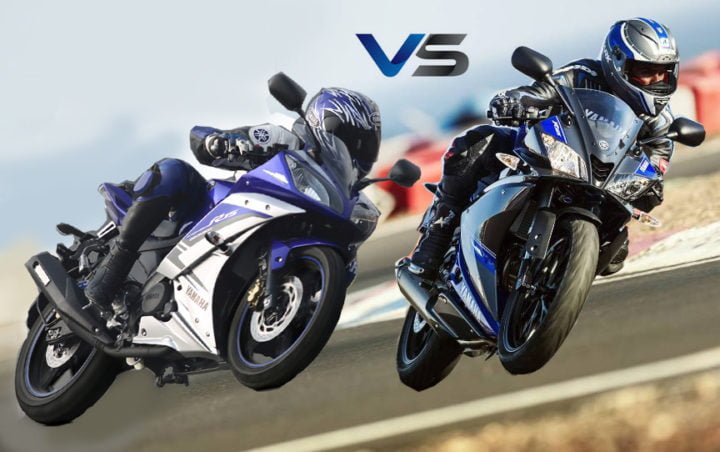 Currently, the Yamaha R15 has an ex-showroom price of Rs 1.18 lakh in New Delhi. This makes the full-fairing bike the most expensive model in its class. However, there are very good chances that the V3.0 will cost even more and have an ex-showroom price tag of Rs 1.35 lakh. That said, the additional features and better specifications will help the product make up for the increase in price.

The full-fairing 150cc supersports motorcycle is currently powered by a 149cc, single-cylinder, liquid-cooled, 4-stroke engine that boasts SOHC technology. The motor outputs a maximum power of 17 PS along with a peak torque of 15 Nm. The engine comes mated to a 6-speed manual transmission. In comparison, the new V3.0 comes with a 155cc motor that benefits from forged piston and lighter DiASil (Direct Aluminium Silicon) cylinder. The new engine is capable of producing as much as 2.31 PS more but its peak torque is rated at 0.3 Nm lower.

Even the new engine comes mated to a 6-speed manual transmission. The model on sale in Indonesia comes with a slipper clutch and soft compound tyres from Pirelli. The India-spec version will likely offer MRF rubber to keep costs in check.

In spite of a substantial increase in power, the mileage won’t have a huge difference. This is because the new engine has more modern internals that makes it slightly more efficient. We are pretty sure that the new model will be able to offer a fuel efficiency of around 37 kmpl. In comparison, the V2 offers around 38 KMPL. As you can see, the difference in the mileage figures will be still almost negligible, which means prospective buyers won’t have much of an issue with the fuel efficiency of the V3.

The new Yamaha R15 V3 will come with a more powerful and a slightly bigger engine. Hence, it all translates into a higher top speed. We are pretty sure that the new motorcycle will have a top whack of around 135 KMPH. The V2 can hit a maximum velocity of roughly 130 KMPH. Please note that we are talking about true top speed figures here. 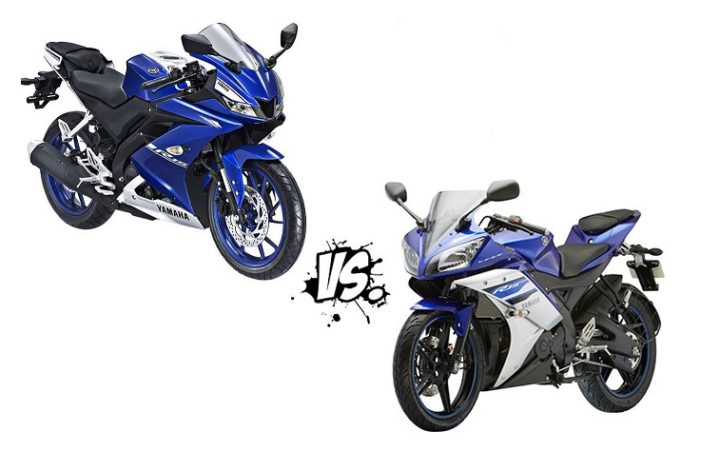 The new version of Yamaha’s 150cc supersports bike looks a lot like a smaller YZF-R6. Also, it looks sportier than the R15 V2. It gets many new body panels, which, along with the new USDs, make the V3.0 look like a bigger machine. Also, the new paint options and decals make the bike look more attractive. The ‘pièce de résistance’, however, are those stylish LED headlamps. The R15 V3.0 also gets a new speedo and a better riding position. While the R15 V2.0 received a lot of flak for its very uncomfortable pillion seat, the V3.0 isn’t likely to face this issue. At first glance, the new 2017 Yamaha R15 V3 seems to bear a resemblance with the Honda CBR600RR. However, a closer look reveals the bike actually takes some design cues from YZF R125 and YZF R6. Basically, all this is definitely a lot fresher than the mini-me R1 looks of the V2.0.

So, what do you say about our new Yamaha R15 v3 vs old R15 v2 comparison? Do you have some more parameters where you want us to compare the two motorcycles? Let us know by commenting below.