The Toyota Corolla is easily among the most widely known nameplates in the world of automobiles. First launched in the 1960s, the Corolla is now in its eleventh generation and has sold over 40 million copies in its lifetime! The ninth generation of the Corolla made its India debut back in 2003, and went on to garner a favorable response in an only lukewarm premium car market. In 2008, Toyota Kirloskar Motor brought the tenth generation Corolla Altis to our shores and went on to launch its Diesel-powered sibling in 2010. The advent of the Diesel motor propelled the Altis towards the top of the sales charts, where it was seen locking horns with the SKoda Laura. Sadly, however, the new generation Elantra and the new Octavia hogged much of the limelight away from the Altis. Come April 2014 and TKM launched the eleventh generation Corolla. Armed with many new features, a voguish exterior design and a decent suspension setup, the Altis Diesel has still been subject to some flak for sporting only a 1.4.-litre Diesel motor with just 90 bhp on tap. We recently borrowed a Altis Diesel from the good chaps at Toyota Kirloskar Motor and drove this stylish sedan to the picturesque Himachal Pradesh to spend some time away from the humdrum city life. The Altis Diesel turned out to be a pleasant companion on our impromptu road trip, and impressed us with its really comfortable cabin and decent frugality. Check out our Toyota Corolla Altis Diesel test drive review to find out all we feel about this car’s Design, Comfort levels, Engine Performance, and Ride and Handling. 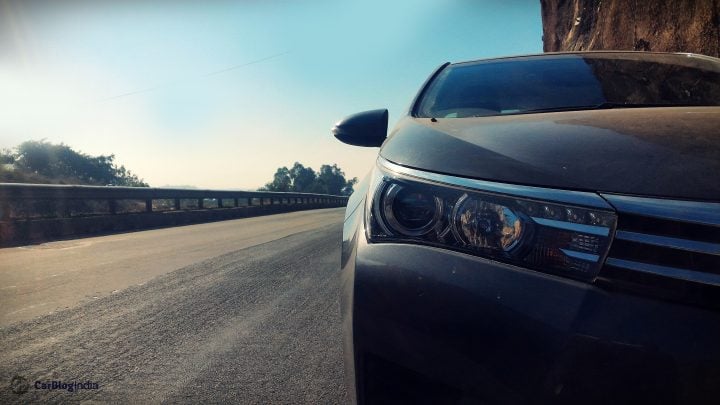 The current generation Corolla carries many dramatically amplified elements of style, design, and craftsmanship. The latest generation of the Corolla makes a strong visual impact with its chiseled and a rather bold exterior design that is based on the manufacturer’s “Iconic Dynamism” theme that premiered on the Furia concept car. Compared to the earlier generations, the current Corolla stands apart due to its tauter, more dynamic proportions. A longer wheelbase, wheels that have been pushed towards the corners and short overhangs come together to bestow an athletic form on to this sedan. Compared to the previous generation model, the current Corolla is 3.90 inches longer and yet has a sportier appearance due to a design form that tapers at the front and rear ends. 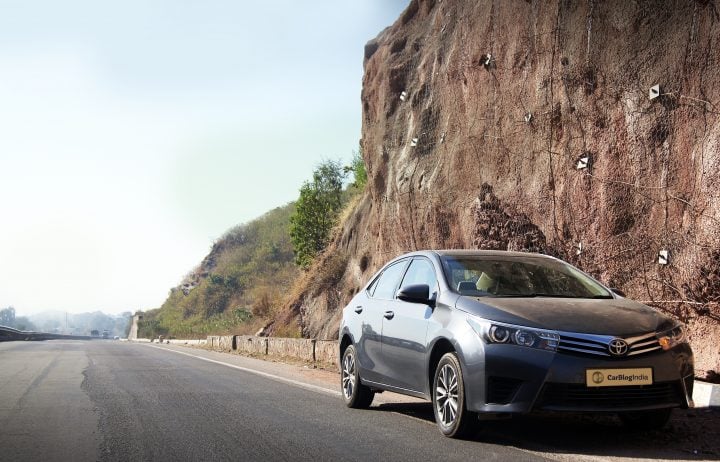 The interior of the current Corolla mimics the swanky exterior. The Iconic Dynamism theme continues to make its presence felt and the occupants find themselves almost marveling at the very stylish yet a highly functional cabin that is made up of high quality materials. The dashboard’s design has a great sense of craftsmanship in its design and is structured in a manner so as to enhance the sense of spaciousness whilst offering an intuitively functional space for interface with vehicle controls. Further enhancing the luxury quotient is ample use piano-black gloss trim and metallic ornamentation in the instrument console. 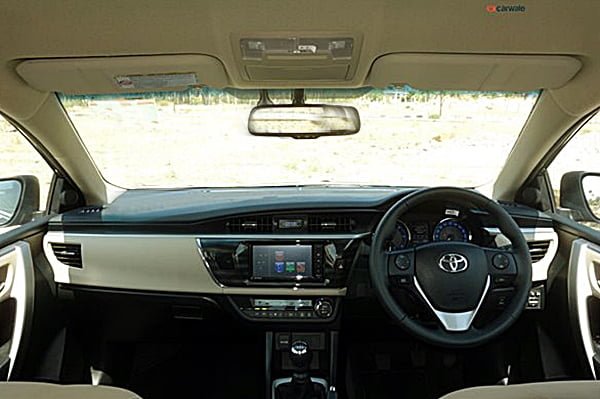 The Diesel-sipping Corolla has received a lot of flak for being short on power. The Altis Diesel, when compared to its main rivals, misses out roughly 600 cc and 8 valves. The motor churns out a humble 90 PS of max. power and 205 Nm of peak torque, which when compared to the Octavia’s 2.0-litre TDI motor, is a full 60 PS and 115 Nm less! There’s a considerable turbo lag below 2,000 rpm and even the acceleration figures are nothing to write home about, with a 100 km/h from standstill taking almost 15 seconds! Even the in gear acceleration is weak and higher pulling power was sorely missed on some of the steeper inclines on the back roads of Himachal Pradesh, where the Altis D almost struggled to charge ahead.

On the brighter side, this engine is really high on refinement and the guys at TKM have done a great job with curbing the NVH levels. Also, while the Altis will be outrun by much cheaper cars in your typical traffic light GPs, this car feels almost at home out on the highways. Stay in the meat of the powerband, which starts from 2,000 RPM and continues almost till the 5,100 rpm redline, and this car makes for a really comfy highway cruiser. True, overtaking high speed traffic does take some planning and working the smooth-shifting 6-speed manual gearbox, but the Altis D can easily cruise at speeds of 140-150 km/h all day long.

Another big highlight here is the fuel economy; we managed to extract around 16.5 km/l throughout the 500-odd kms we spent on the expressway. Back on the mountains though, frequent gearshifts and heavy throttle inputs took a toll on the fuel mileage. Overall, we still managed a respectable 13 km/l on our 1,200-kms long road trip. 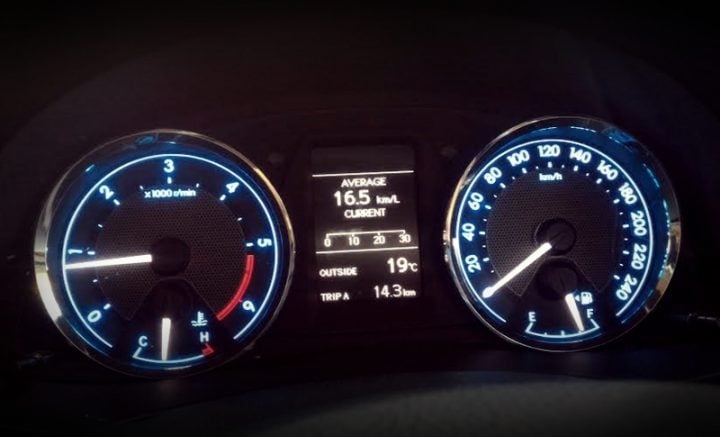 Another highlight of this car is the really comfortable ride it has on offer. The suspension has been tuned to soak in most of the craters and undulations with ease and the passengers don’t complain of any sort of harshness even on the slightly broken patches of road. The passengers remained impressed with ride quality throughout the 2-day trip and we reckon that this car offers best-in-segment ride comfort. Clearly, this suspension has been optimized to offer a great ride quality, which means that the Altis isn’t best of the handlers out there. For starter’s, the steering is really light and doesn’t weigh up too well as speeds rise. While the grip levels from Yokohama Advan rubber is pretty good, the Altis is prone to understeer under aggressive cornering. There’s also some body roll, which makes it a bit unnerving to corner really hard. The handling manners, at best, can be described as neutral, and the Altis Diesel, thanks to its average handling manners and lower power, could find it really tough to keep up with an Octavia on mountain roads. 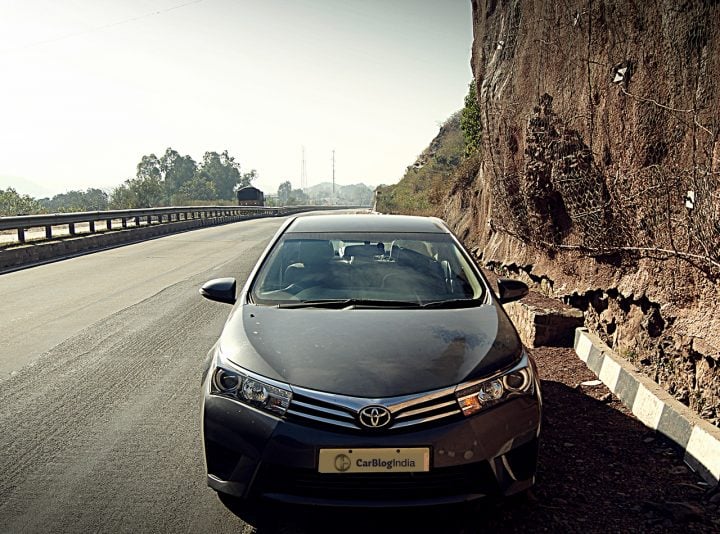 The Altis gets disc brakes on all the wheels, with the braking being further aided by ABS and EBD. The brakes are sufficiently potent to haul down this car from triple digit speeds without as much as breaking a sweat but we would have appreciated a bit more feedback from the brake pedal.

The Toyota Corolla is a really handsome and a stylish car to look at. It also offers a really spacious cabin, which offers a set of really comfortable seats and is made up of high quality materials. This car also offers a really comfortable ride, with the suspension being suitably tuned to tackle worst of the road conditions. However, the Diesel engine feels really under-powered when in need of brisk acceleration and/or on steep inclines. The Corolla is also not fun in the corners, all of which means spirited drivers should simply look elsewhere. The Toyota Corolla Altis, then, comes across as a car that makes for a really great commuter that can also handle the occasional highway jaunts. 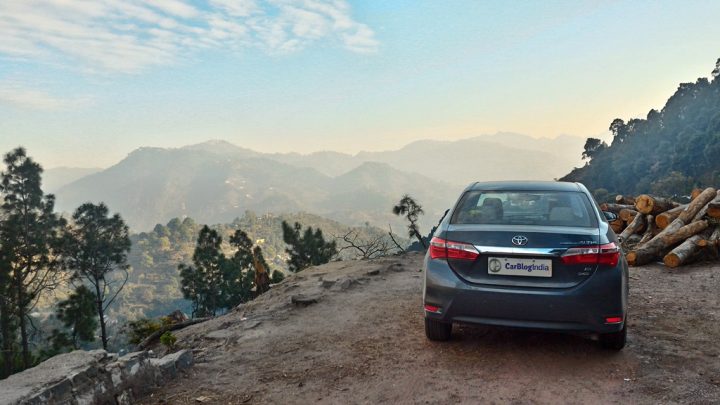 Stay tuned to Car Blog India for more posts like the Toyota Corolla Altis Diesel Test Drive Review that we have here. Also, watch this space for more on the very capable Toyota Corolla.