2018 Toyota Rush Interior Leaks Online Ahead of Launch in Indonesia

Last week we reported about the leaked official images of the exterior of the upcoming 2018 Toyota Rush. In the latest development, a fresh batch of leaked images has even revealed the interior of the soon-to-launch model. The new 2018 Toyota Rush interior images you see in this post here go on to reveal various features and design elements of the new-generation small SUV. 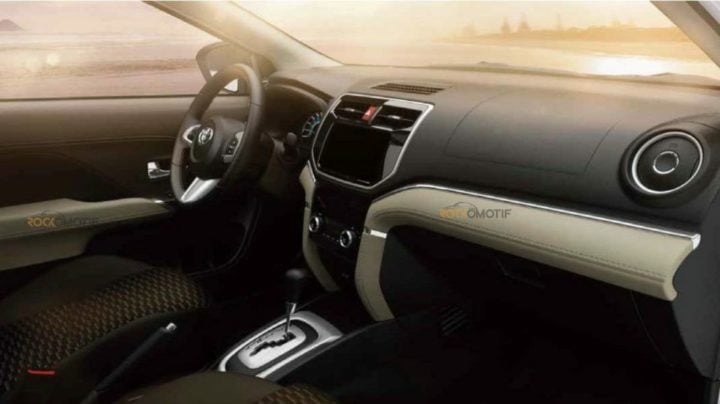 As you can see in the images here, the dashboard has a two-tone look, which is courtesy of dark-grey and beige plastics. A faux silver trim running across the dashboard lends a touch of sophistication to the dashboard. There’s some silver trim even on the door panels and the steering wheel. The speedo cluster has blue and white backlighting. The aircon unit offers a digital display, with the top-of-the-line TRD Sportivo variant even getting an automatic climate control unit.

The highlight of the centre-stash is a 7-inch touchscreen infotainment unit that also doubles up as a display for the rear camera. The front seats don’t get an armrest. However, there are three cupholders in the front. The second row of seats gets three adjustable headrests. The seats come draped in black upholstery. The range-topping trim gets as many as six airbags.

The new generation 2018 Toyota Rush, upon its India launch, will be seen rivalling some successful models like the Hyundai Creta and the Renault Duster. Prices will fall in Rs 8 lakh to Rs 12 lakh range.

Stay tuned for more details on the 2018 Toyota Rush Interior and the latest news on the launch date and other important details. Also, watch this space for more on cars and motorcycles relevant to India.