Bajaj Dominar is currently one of the least performing motorcycles in the company’s lineup. Despite being packed with performance and premium features, it still fails to attract high demand amongst its other popular competitors.

Bajaj Dominar is the most powerful motorcycles under Rs 2 Lakhs, packed with the Duke 390’s engine. Despite that, Bajaj has not managed to make it much big with the Dominar. It is yet to get its BS-6 compliant version launched.

Speculations suggest that Bajaj might be considering Dominar 200. It would increase the demand for the Dominar brand name and also be one of its kind sub-200cc power cruiser. A new spy shot reveals the possibility of the smaller Dominar. 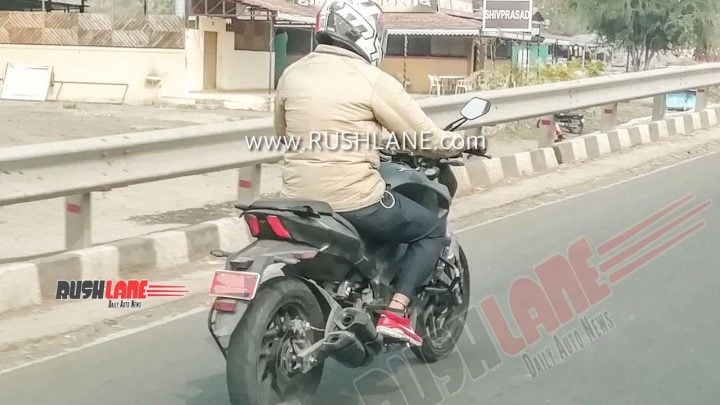 The spy shot reveals that the spotted test mule gets a cheaper swingarm and a smaller disc brake setup. While the other body parts like USD Forks and alloy wheels remain the same.

While the Dominar looks good and comfortable, but a fuel-efficient Dominar would be better, right? So check out what we expect about this power cruiser and get details of its possible launch, price range and specifications.

While we think the Bajaj Dominar 200 will come to the market by mid-2020. Bajaj is not attending the Auto Expo 2020, so the new model might be introduced in a couple of months.

The Bajaj Dominar 200 will make use of the same engine as the Pulsar RS 200 (derived from KTM 200 Duke/RC 200). Also, it will be detuned a bit in the in the application. To keep costs in check, we think it might come with a single-channel ABS unit.

Like we said earlier, the Dominar 200’s specs will be similar to those of Pulsar RS 200. The difference arises in power and torque figures, which are on the lower side for the smaller Dominar. However, the rest of the components should stay the same. Another thing to note here is that this bike will have retuned suspension. Expect its gear ratios to also be redone.

Having a detuned engine in comparison to Pulsar RS 200 means the Dominar 200 will offer better mileage. However, don’t expect it to offer way better mileage over its Pulsar counterpart. This is because the Pulsar RS 200 has a full fairing to help it in the aerodynamics department.

In its detuned state, the 200cc engine of Dominar should be able to push it to a top speed of 135kmph. The lack of a fairing will keep its top speed lower than the RS200, but definitely its top speed will be similar to NS200.

Most likely, the 200cc power cruiser will get the same features only that come on Dominar 400. They include:

The Dominar 200 will get the same dimensions compared to the Dominar. Since the components are changed, it could be lighter than the Dominar.

If the bike is launched, it will mainly compete with sub-200 CC sports bikes along with the sub 200 CC cruisers. Within sports bikes, it will face competition with Apache RTR 2004V, Bajaj Pulsar NS200, KTM Duke 200 and more. Within cruisers, it will compete with Avenger Street 220, Avenger Cruise 220 and Suzuki Intruder. However, the pricing will be an advantage here. A lot of the bikes who have a lesser specs engine, compete with Dominar 400 on its pricing.

Stay tuned to Car Blog India as we bring you more on Bajaj Dominar 200.