Bajaj Pulsar has been the moniker that has brought performance biking to the masses in India. Bajaj brought an all new revolution in budget sport biking when it launched the Pulsar 200NS, though it was more a KTM underneath than it was a Bajaj. And now to take things to the next level, the company is preparing a fully faired version of the bike, the Bajaj Pulsar 200SS which has been caught testing. What’s new this time around are the reports that suggest that Bajaj is testing the bike with Fuel Injection or ABS or both of them to make it a complete sports tourer.

The Bajaj Pulsar 200SS (Supersports) has been caught on candid camera in the hills of Ooty where the company is believed to be testing the fuel injection system’s performance at higher altitudes. One of the better things about fuel injection is the fact that it ensures that the bike starts up in one go despite the weather conditions. Cold morning starts are something which most of us bikers have an issue with and in order to ensure that its latest flagship doesn’t suffer the same, Bajaj is testing it in the hilly areas of the country. The bike was caught testing in Lavassa sometime ago which incidentally is also a hilly region. 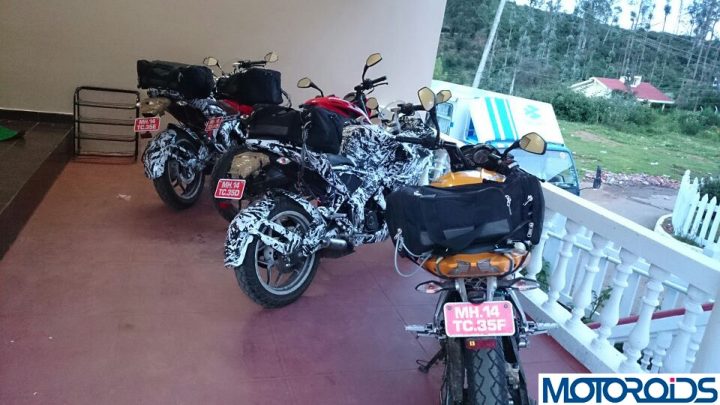 Bajaj is believed to be testing ABS as well on the bike which will be available as an option on the costliest Pulsar ever. What’s more interesting is the fact that Bajaj is also testing the Pulsar 200NS alongside the full faired sibling. So what it does is that it makes us wonder if the naked sibling will also get fuel injection or ABS. Bajaj is looking to up the ante in the budget performance biking arena and both these bikes will surely be instrumental in determining if Bajaj manages to do so.

The Bajaj Pulsar 200SS will come with a single cylinder 199cc engine that delivers a maximum power output of 23 BHP and 18 Nm of peak torque. It will come with LEDs as trafficators like the ones on the KTM 200 Duke. It will come shod with twin projector headlamps and a small windscreen to reduce drag. The raised clip-on handlebars will ensure you get the best touring experience. That is all we have on the Bajaj Pulsar 200SS for the time being. The bike is expected to hit the loads in the first half of 2014 for about Rs 1 lakh. It is expected to be showcased at the 2014 Indian Auto Expo in February.