The present Honda CR-V has been around for a few years now and a next generation model was badly needed. Honda, being smart, sensed it early and released a picture of the 2012 Honda CR-V Crossover SUV concept which made the curiosity travel across the internet like forest fire.

Unfortunately other than the picture the company did not give even the slightest of the clue about any concerned detail. But today the we have received some leaked information about the technical specifications of the car, which i guess is enough to keep the curiosity level raised. 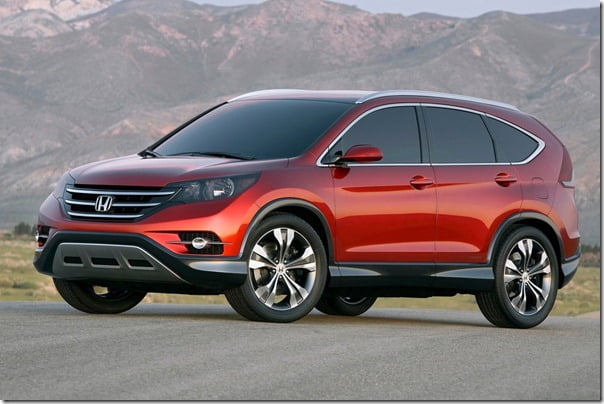 Briefing you on the designing of the car, Honda has continued the radical styling scheme and this new CR-V is even more aggressive, brutal, enormous and really sporty. Now coming to the leaked information, the company is all set to introduce a new MPFI petrol engine with the 2012 CR-V.

A total number of three, two petrol engines and one CRDi diesel engine will be on offer with the car. The two petrol units are as follows:

A 5 speed manual transmission will be continued with the next gen CR-V. As far as the diesel engine is concerned, after the car’s official launch in India somewhere in 2012 following the international launch expected in 2011, the company is expected to launch a turbocharged diesel engine.