With more and more adding to the list of cars to be displayed at the New York Auto Show, why should a brand miss any such opportunity to display their new cars and with the same notion in mind Kia is all set to unveil the new 2011 Kia Optima at the New York Auto Show. The car seems to be much more attractive than the older versions and probably deserves to be a flagship model.

The Optima is also known as Magnetis globally and is a 4-Door Coupe/sedan and currently it is the flagship sedan for the brand. 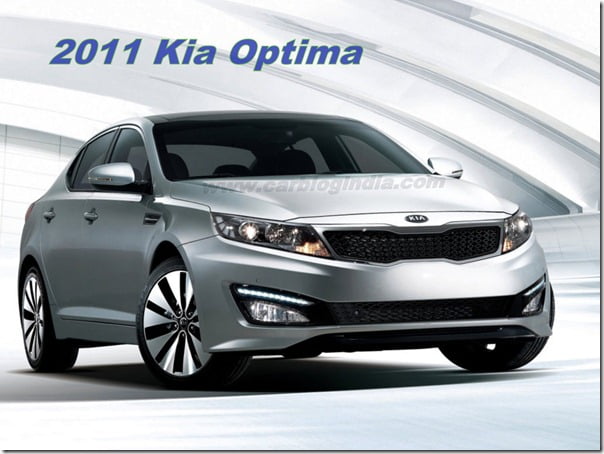 The older Optima/Magnetis is less pronounced than the new one which is promised to be much more stylish, attractive and sportier and will resemble a coupe than a sedan.The new optima will be wider and more stable due to a longer wheelbase. According to Kia the cosmetic changes adopted for the previous Optima have resulted in the new 4-door coupe rather than a sedan.

Talking about the engine specifications the new 2011 Optima will sport the same engines as seen in the 2011 Hyundai Sonata which will be offered in both 4-Cylinders and 6-Cylinders. The 4-Cylinder Sonata engine will be a 2.4 liter engine developing a maximum power of 240BHP along with 186 lb-ft of maximum torque. The car is expected to burn 1 gallon of fuel for approximately 35 miles on the highway.

The car is expected to arrive at the dealerships by the end of 2010 with a possibility of a Hybrid variant also following. For more updates stay tuned to @carblogindia on twitter.