Yes, the motorcycle you see in the images here is indeed the KTM RC390. And yes, it does cost a whopping Rs 15 Lakh-plus. But believe you me, this bike is worth every penny of your hard-earned money. Why? Because this one’s a pure race-bred motorcycle that has been modified using an SSP 300 Race Kit. Dubbed as the KTM RC390 R, this motorcycle is much sharper and sportier than the regular, vanilla RC. Currently available only in the United Kingdom, this KTM costs a whopping 19,500 Euros. Actually, the regular RC390 costs 8,500 Euros and the SSP 300 Race Kit costs another 11,000 Euros.

The RC390 R offers improved ergonomics to suit the fully committed riding posture on a race track. It offers an adjustable WP suspension at the front and the rear. The brake levers and the clutch levers fold up on contact with the ground in an event of a crash. Other than this, there’s also a thinner seat for the rider and along with stickier rubber in the form of racing slicks. There are many more bits that the SSP300 race kit adds to the Austrian machine. In all, there are as many as 230 individual parts that make the RC390R race-ready. These include- 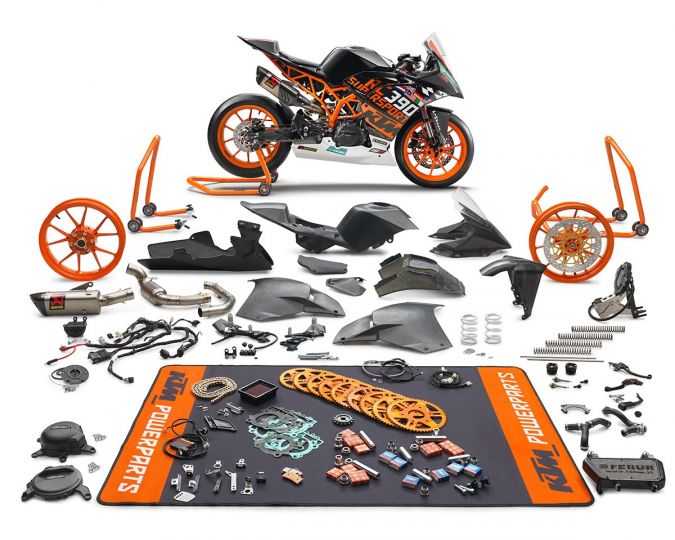 Currently, Bajaj Auto Ltd (BAL) produces the RC390 at its Chakan facility. The Made-in-India RC390 is exported to Europe. However, you can’t buy the KTM RC390 R in India, no, not yet. This motorcycle is a Europe-only model and has been homologated to compete in the Supersport 300 racing series. Only 500 examples of this motorcycle will be ever built. At the moment, Bajaj-KTM is busy readying the 2018 RC390 for its India launch.  The 2018 KTM RC390 is expected to cost roughly Rs 2.40 lakh. If rumours are to be believed, the new 2018 KTM RC390 will hit the dealerships in the coming month itself. There are good chances that the new motorcycle’s India debut would take place at the Auto Expo 2018. Stay tuned for the official update of the launch of the 2018 KTM RC 390.

So, do you think KTM India should launch the new KTM RC390 R here? Share your views with us by writing them down in the comments section below. Also, stay tuned to Carblogindia for the latest news updates on cars and motorcycles relevant to India.