The very interesting Mahindra XUV Aero Coupe SUV concept made its debut at the 2016 Auto Expo. More recently, the design study was showcased at the 2017 Automobile Barcelona. The XUV Aero Coupe SUV is likely to launch in near future and its high sticker price will make it the most expensive product in Mahindra‘s portfolio. The Aero concept is based on the popular medium-size SUV but gets a X6-like coupe-crossover design. We can’t say it’s the most beautiful sight but the XUV Aero did turn a lot of heads back at the Expo. 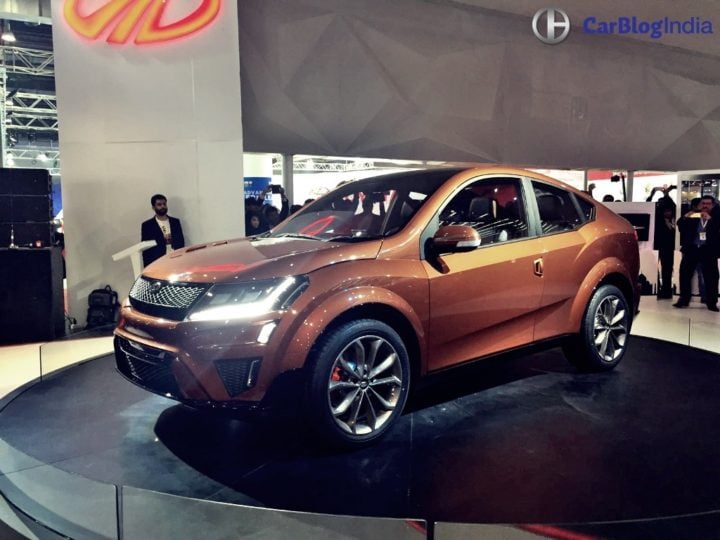 While the company hasn’t been too vocal about the Mahindra XUV Aero launch plans, Mr. Pawan Goenka, Executive Director, M&M has hinted that his company is already working on readying this product for its market launch. However, the manufacturer believes that the Indian market is yet to become favorable for premium products from local companies. Hence, it’s only after conducting numerous studies that Mahindra can confirm this car’s launch plans. 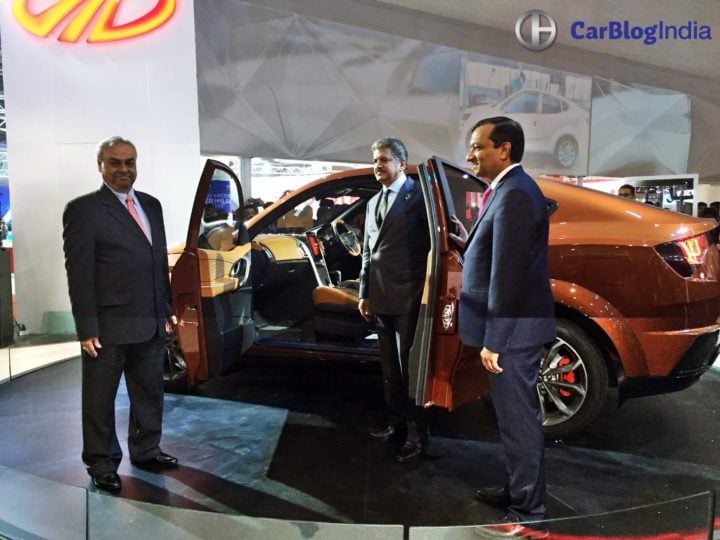 The Mahindra XUV Aero Coupe SUV shares many of its design cues with the regular XUV500. However, thanks to a coupe-like rear, the car manages to have a pretty bold stance and looks somewhat aggressive, too. Like we said, the Aero concept from M&M was far from being the prettiest of sights back at the 2016 Auto Expo. However, Mahindra insists that this is the most expensive design concept by any Indian car maker. Honestly, with an odd-ball design like that, we really wonder if Mahindra forgot to pay the design team.

The Indian car manufacturer is yet to announce the launch date of the XUV Aero. However, rumours abound that this vehicle might go on sale in 2018. Mr Pawan Goenka, Executive Director, Mahindra & Mahindra, said that the XUV Aero will go under production if the feedback is positive. The final production call will be taken within the next couple of months. Though, the Mahindra XUV Aero concept will take at least two years to go on sale.

While the Mahindra XUV Aero Price in India will be revealed only at the time of its launch, speculations are rife that the Aero Coupe will have a starting price of Rs 20 lakh. The top model could cost Rs 23 lakh. At this price range, the upcoming Mahindra SUV in India will become the most expensive model from the manufacturer.

Powering the new Mahindra SUV is a 2.2-litre mHawk Turbo Diesel engine that boasts a modern turbocharger, an advanced combustion system and a low pressure Exhaust Gas Re-circulation technology. Thanks to various new technologies, the engine is high on performance, mileage and refinement. Mahindra is already using the 2.2 mHawk in many of its vehicles but it looks like the best avatar of this engine will be seen on the XUV Aero.

For the upcoming Mahindra SUV in India, this engine will output as much as 210 BHP. It will come mated to 6-speed Manual and 6-speed Automatic transmissions. It will come with four drive modes – Race, Street, Sport, Off Road. Mahindra claims the engine can hit 100 KMPH from standstill in just 6-seconds. Let’s take this with a pinch of salt thou.

As the engine is shared with a host of other Mahindra vehicles, mileage of the XUV Aero won’t be very different. However, thanks to a high power state of tune, it will offer lower mileage. Expect 10 KMPL in city and 12 KMPL on highway.

While Mahindra did not shed too much light on the unique features of the XUV Aero, these are some of the highlights

The design of the Aero Concept is the biggest talking point of the upcoming Mahindra SUV. It features a mixture of SUV and coupe styling. Although that is something we have now seen on multiple products such as the BMW X6, Mercedes GLE Coupe, etc., never before has an Indian manufacturer come out with something similar. The front end of the XUV Aero Coupe is nearly identical to that of the XUV500. However, it does get a new bumper and very healthy dose of LED lights. Its side profile shows off XUV Aero’s unique silhouette. Another interesting design element here is the suicide door for the rear passengers. We say door because the right side of the vehicle features a single front door. 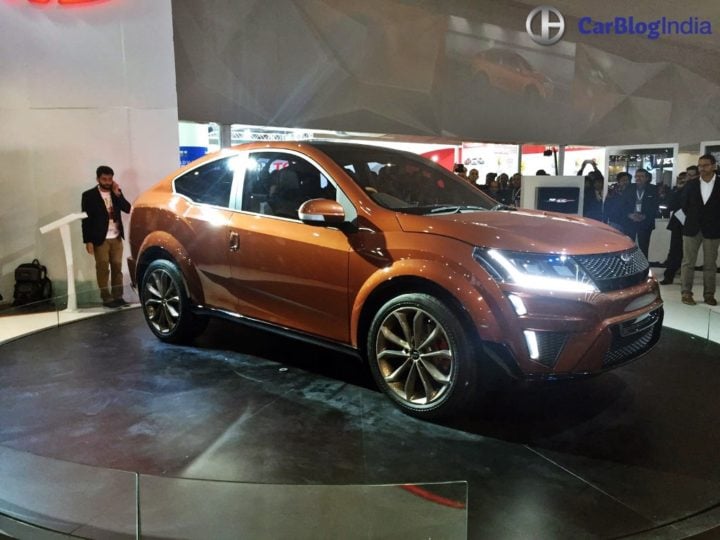 At the back, the rear windscreen flows neatly into a stubby lip spoiler. Mustang like triple slat LED tail lights adorn the rear of the Mahindra XUV Aero Coupe Concept. The lower part of the bumper features some black mesh inserts and a faux diffuser. Overall, the car is certainly a looker. And at this price point, there be a fair few buyers lining up to get their hands on one of these. 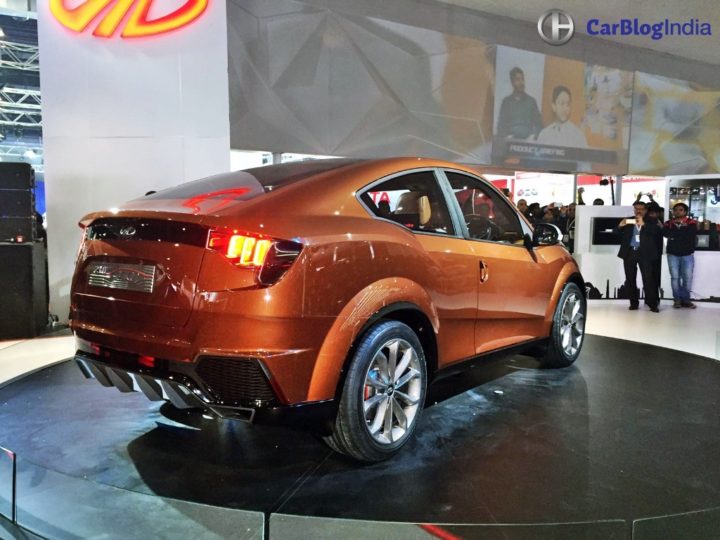 Much of the interior design of the XUV Aero is identical to the XUV500’s interior. There is a new colour scheme, but it is unlikely to make it to the final production form. The centre console features a huge floating high-resolution touchscreen, a feature we could soon see in future Mahindra products. The XUV Aero gets a new steering wheel and a new instrument console as well. The car that was on display at the Auto Expo was a strict four-seater with four individual seats. Quite obviously, the XUV Aero, unlike the XUV500, will not have a third row of seats. 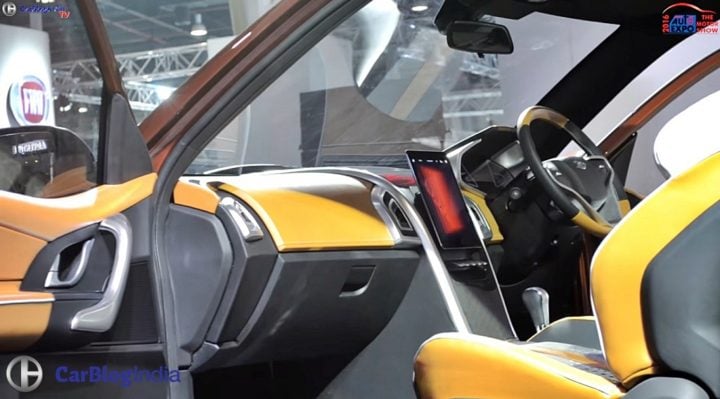 We’ll keep you updated with the latest developments regarding the Mahindra XUV Aero Launch in India. Would you like to see the XUV Aero Concept enter production? Do lets us know via the comments section below.