Launched in October last year, the Maruti Ciaz replaced the slow-selling SX4 sedan to set forth on a rather Herculean mission – to spearhead MSIL’s charge in the fast growing C2 sedan segment, and give the formidable Honda City a run for its money. Several months down the line, the City continues to be the undisputed leader of its segment, but perched atop a ‘not so distant’ second place is the Ciaz, which has not only left a sizable dent on the sales of the City, but has also become the most successful upper-C segment sedan from Maruti Suzuki. Almost a year after it’a launch, Maruti, with the Government’s FAME scheme in place, gave us a hybrid version of the sedan. So, what is it that makes the Ciaz more desirable than the Baleno and the SX4? With similar questions in mind, we decided to spend some time with the petrol, as well as the diesel hybrid variants of the Ciaz, all in a bid to find out if the ghosts of the Baleno and the SX4 have been finally put to rest. Read our Maruti Ciaz Diesel SHVS and petrol review below to know all about the latest mid-size sedan from Maruti Suzuki. 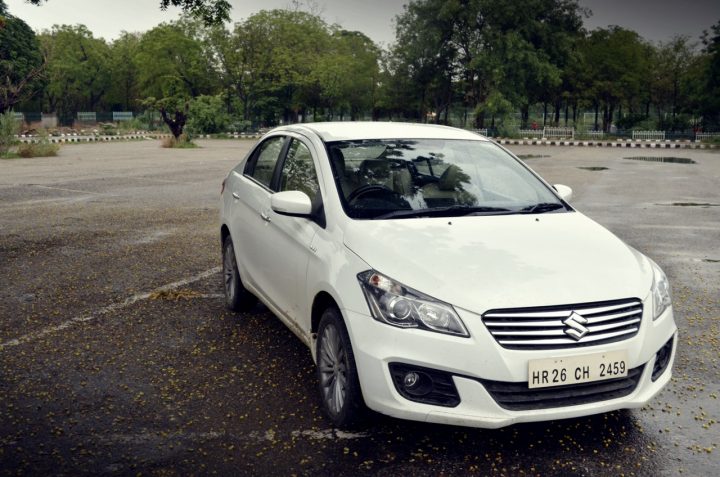 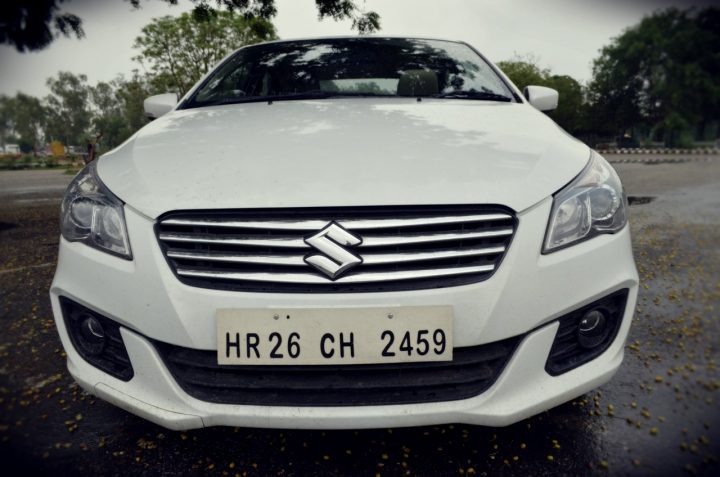 The Ciaz doesn’t break any new grounds in the way it looks. That said, it would be rather safe to state that this car is among the better-looking products in its segment. The front of the car is characterized by a clamshell hood, swept-back headlamps that feature projector setups, a wide trapezoidal grille with four horizontal chrome slats running across it, and a neatly sculpted bumper that flaunts a rather discreet integrated diffuser. 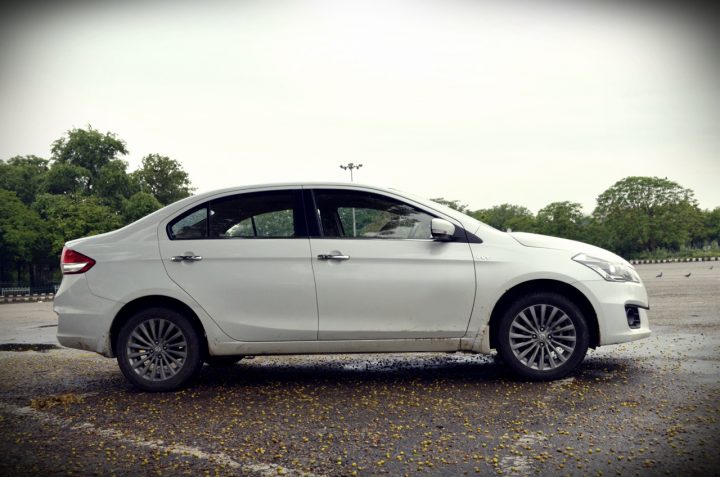 Look at this car in its side profile, and you’ll be quick to observe that the Ciaz almost feels longer than most of its rivals. To put things in perspective, the Ciaz, at 4,490 mm, is as much as 80 mm longer than the current generation Hyundai Verna (4370 mm). However, it needs to be mentioned here that the designers of this car have played it pretty safe and the only highlight here is a neat shoulder line that runs across the doors of this sedan. Also, the top-end variants get classy multi-spoke alloy wheels, which further elevate the aesthetic appeal. 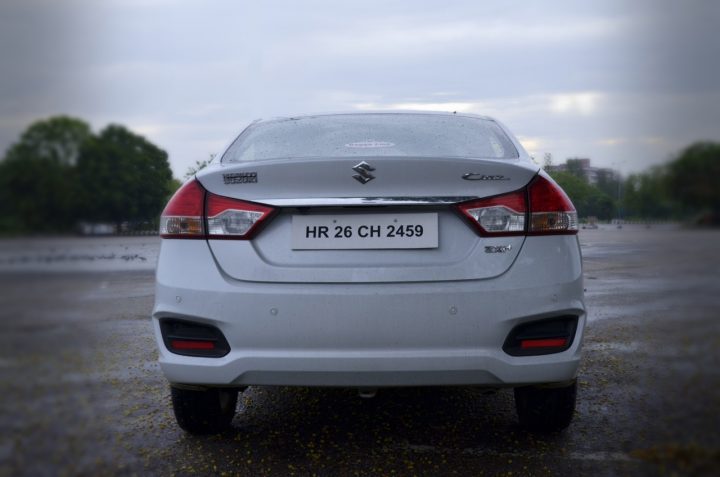 The rear-end of the Ciaz invokes a lot of mixed feelings. While we like the stylish wrap-around taillights, the integrated boot spoiler, and the neat creases on the bumper, the very fact that this car’s posterior almost mimics the current generation Honda City could be a put off for many. Also, the faux air vents in the rear bumper look like a last-minute attempt to enhance this car’s sportiness quotient. The badging placed on the bottom right corner of the boot lid is the only visual differentiator between the petrol and the SHVS versions of the Ciaz. 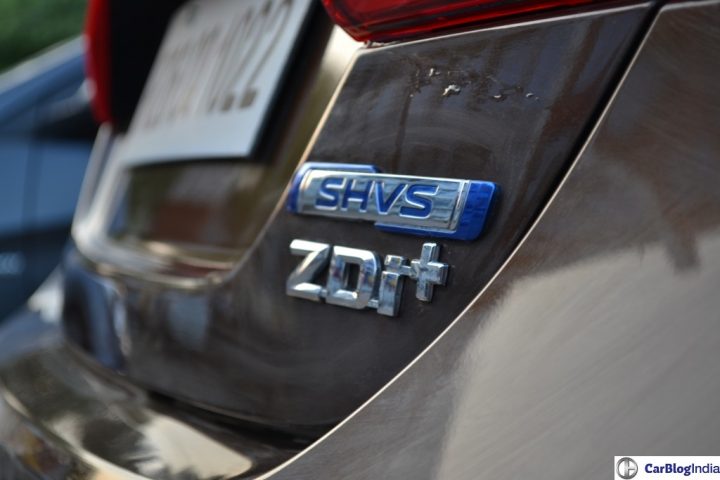 Overall though, the Ciaz is a handsome car, and while it isn’t as flashy as the Hyundai Verna, its inoffensive looks are sure to appeal to a wide range of audience. 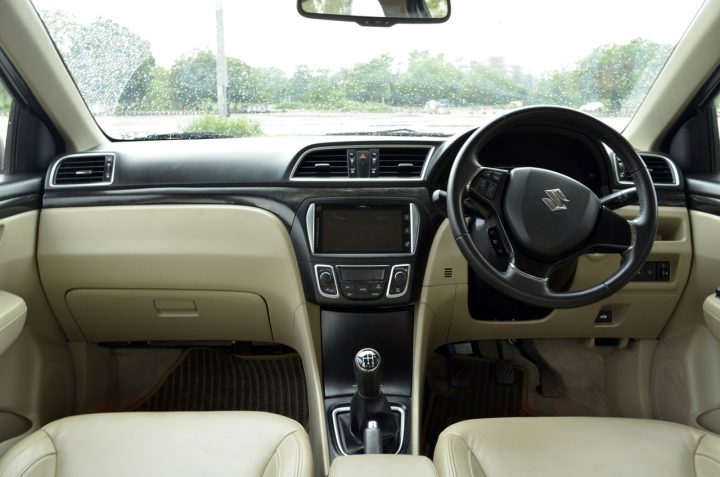 The Ciaz is a nice place to be in. The cabin is made up of high-quality materials and the black-beige color theme should impress the buyers. The black-beige dashboard gets a pleasing if a rather conventional, design and features a touchscreen AVN system for the top-end variants. There’s a strip of high-quality faux wood, which divides the dashboard into two. While the top of the dashboard gets a black treatment, the lower part features a shade of beige. There’s a closable storage space in the centre console and the aircon vents get silver highlights. The steering wheel, which comes from the Swift, is leather wrapped and gets chrome highlights at the terminal ends of the boss. The instrument cluster is another minor distinguishing factor between the two powertrain options. While the petrol Ciaz gets white backlit dials, those of the Ciaz SHVS get a light teal shade with the letters ‘SHVS’ inscribed in the centre of the speedo in the same shade. There is also a gear shift indicator which tells you the optimum gear the car should be driven in to enhance fuel efficiency. As evident from a look at the exterior, the interior of this car is very roomy and offers segment-leading space. Also, there are plenty of cubby holes to store the knick-knacks. The top of the line Z+ trims get features like auto aircon with rear vents, leather upholstery, park assist, AVN, engine start/stop button among others. As we said, the cabin of this Ciaz has left us impressed and we are really glad with the way Maruti Suzuki has set a new benchmark in terms of cabin quality.

The Diesel variant is powered by a 1.3-litre Multijet diesel producing 88.5 bhp of power and 200 Nm of torque. While the sedan may seem underpowered on paper, any fears of the Ciaz diesel being a slouch are put to rest once you get behind the wheel. Thanks to the clever gearing and the rather linear torque delivery, the sedan doesn’t give the driver much to complain about. Even out on the highways, the Ciaz easily pulls to speeds of around 140 km/h without showing any signs of being underpowered. The Maruti Ciaz SHVS is not exactly a hybrid in the conventional sense, but it is still very clever. Maruti has taken the standard Fiat-sourced 1.3 litre Multijet diesel engine and coupled it with an ‘integrated starter generator’ and a start-stop system. What this means, in simple terms, is the motor assists the engine when the vehicle is running and utilises the energy lost during deceleration to charge the big battery pack fitted in the Ciaz SHVS. Like the start-stop system we have seen on Mahindra cars and other offerings in the market, the one on the Ciaz cuts in whenever the car comes to a halt in neutral. Pressing the clutch brings the motor back to life, thereby saving fuel which would otherwise have gone wasted. Naturally, the aircon compressor also turns off with the engine, but the system interacts with the climate control and will automatically turn the engine on if required. This goes on to ensure that the occupant comfort isn’t compromised. All this technical wizardry combines to give the Ciaz SHVS a claimed mileage of 28.09 kpl, making it the most fuel-efficient car in the country! 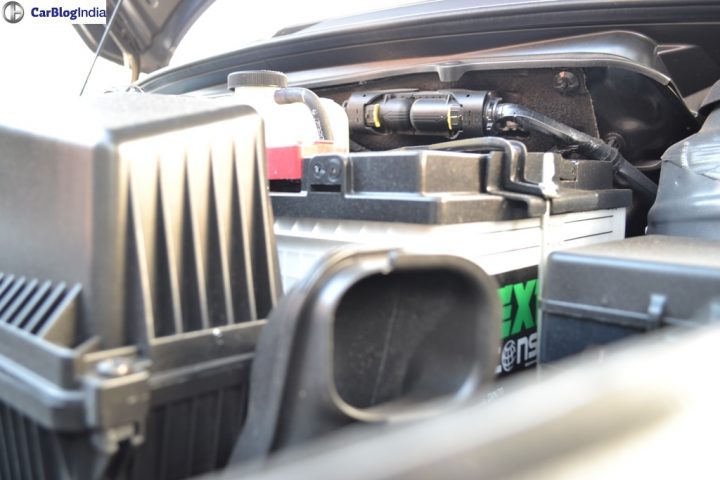 Powering the petrol variants of the Ciaz is a 1.4-litre, naturally aspirated, four-cylinder motor that belts out a maximum power of 94 bhp and a peak torque of 130 Nm. While this is the same K14 motor that powers the Ertiga, it has received some updates to enhance the fuel efficiency. As we discovered, the Ciaz delivers a fuel mileage of roughly 14.5 km/l in mixed driving conditions. Maruti, however, claims a peak fuel mileage figure of 20.73 km/l under test conditions, which is nothing short of impressive for an engine that powers a car of this size. The motor comes mated to a five-speed manual transmission. 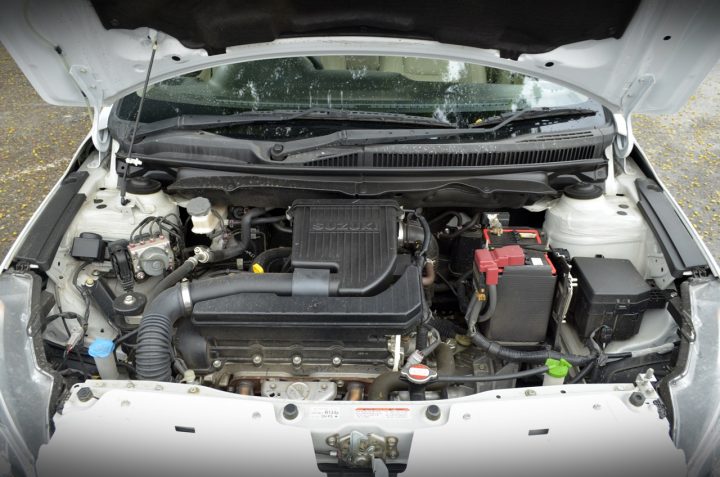 The engine is pretty refined and is sufficiently potent to comfortably propel the Ciaz to triple digit speeds. The Ciaz petrol can dismiss 100 km/h from standstill in 12.5 seconds and the car can comfortably cruise at speeds of 120-130 km/h all day long. The gearshifts are smooth and the ratios are well spaced out. We don’t see much of a reason to complain here, until the enthusiast in you takes charge. Don’t get me wrong here, for in no way is the Ciaz a lousy performer. However, the boy racers out there would miss the free-revving nature of the Baleno’s old school G16B motor and the Ciaz’s motor lacks the urgency of its forefather’s engine. That said, the Ciaz has enough grunt for the occasional highway trips and is easily among the better performers in the mid-size family sedan segment.

Maruti seems to have struck a right balance between ride quality and handling prowess. The suspension is a bit softly set and makes short work of most of the craters and speed humps our roads are famous for. The body roll is well controlled and the passengers won’t have a reason to complain even in the tighter of the corners. However, the Ciaz is not the best tool to go corner carving in. The steering, which isn’t light, doesn’t weigh up with speed and isn’t as communicative as that the Skoda Rapid. But on city streets, where one might wish to indulge in playing the lane splitter, the Ciaz doesn’t disappoint. Braking setup comprises of ventilated disc brakes at front and drums at the rear. Braking is sharp and the ABS ensures that the Ciaz stops in a straight line.

Okay, the Ciaz doesn’t look as flamboyant as its Korean rival. Also, it isn’t as confident in the corners as its European competitors. Even the power figures won’t make you go weak in the knees. But as an all-rounder, the Ciaz makes quite a strong case for itself. The Ciaz covers a lot of real estate, there’s a long list of features, the engines offer just the right mix of performance and fuel economy, and Maruti has got it really right with striking a good balance between the ride quality and road handling capabilities. Even with the introduction of the hybrid tech the Ciaz is still significantly cheaper than arch-rival Honda City. And with all these bases covered, the Ciaz makes for quite a compelling buy. Look no further if you are in the market for a feature-laden, spacious, and a comfortable car that is backed by a well-established service network.