Toyota India has launched the Toyota Innova facelift in India. The styling changes may not be to everyone’s taste, we still think that the first facelift given to the MPV (in 2009). Anyway, Toyota has managaed to sell over 4-Lakh units of the MPV in India till today and we don’t think the looks of the MPV will affect the sales in any way. The comfort, driving character and features on offer in the Innova are enough to bring hordes of customers into Toyota showrooms.

“The Innova has been an undisputed market leader in its segment and has carved a niche for itself over the years. Be it for a family, corporate or the fleet segment, the Innova is sought after by all due to its high standards of dependability and the promise of Toyota’s QDR. Designed to offer exclusivity, the new Innova is further heightened by luxurious styling in combination with sporty looks and is aimed at providing more comfort, style and prestige that enhances its versatile nature, practicality and luxurious image. We are extremely delighted to introduce this new offering to our customer during this auspicious festive season,” said Mr. Sandeep Singh, DMD & COO, Toyota Kirloskar Motor. 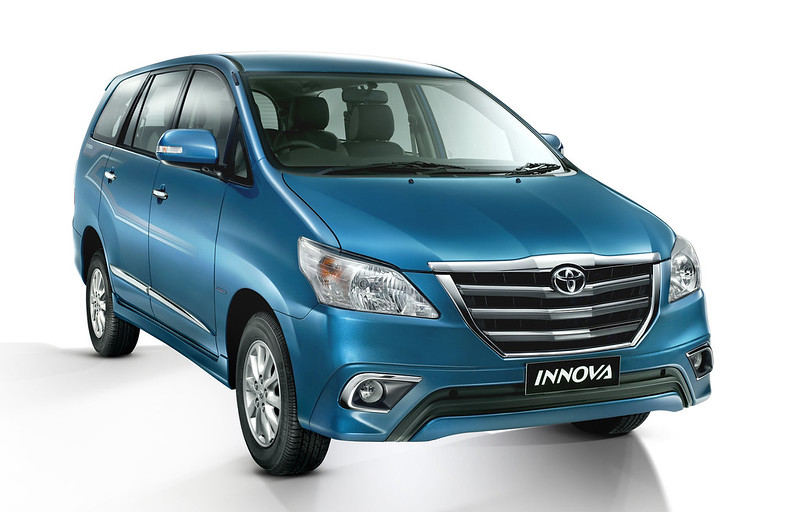 These are the five new diesel variants launched along with the facelift, a new top end ‘Z’ variant has been added to the lineup:

The prices of the petrol variants have not been revised:

The full price list of the diesel variants is as follows:

The GX, VX and Z variants get the cosmetic upgrades inside out. The G and EV variants will continue to look like the earlier facelift model. The ‘Z’ varaint is the new top end variant of the Innova. No mechanical changes, that’s it.

The Toyota Innova now gets eye-catching (not necessarily in a good way) design changes on the outside, the silhouette remains the same and no sheet metal changes have been made from the last update the MPV received.

On the outside, new features include:

So there are not many changes, we think the changes don’t do much justice to the MPV.

You will not really notice the (minimal) changes made to the interior of the unless someone points them out to you, which is a big letdown.

Standard features (comparing the GX, VX and Z variants only)  include:

The VX variant gets these added features:

The top end Z variant gets these extra features:

A bit disappointing that Toyota has not made sweeping changes to what is essentially a 10-year old design. We will have to wait till 2015 to get an all new Toyota Innova, but we think Toyota has missed a big opportunity.

The ‘Z’ varaint looks totally unnecessary, the features on offer after paying Rs. 54,000 over the VX (7-seater) variant trim do not justify the price. There is no denying the fact that the Toyota Innova is a good MPV, but this update has not done much to make it more appealing.

What do you think of the Toyota Innova facelift? Let us know in the comments section below.