Volkswagen India has launched the Volkswagen Vento TSI in India. It gets the 1.2-litre turbocharged petrol engine from the Polo GT TSI and the 7-speed dual-clutch transmission, the same one found on the Polo GT TSI, though paddle shifters will not be offered.

The Volkswagen Vento TSI has been priced at Rs. 9.99 Lakh ex-showroom Delhi.

Exterior changes: TSI badging on the bootlid, rest is the same as the Vento Highline variant.

Performance: New engine has more torque at lower RPM as compared to the 1.6-litre petrol in the normal variants of the Vento, so expect better pickup.

Features: The same as the Vento Highline variant, addition of Hill-hold function (car stops itself from rolling when starting on an incline)

Safety: Same as the Highline variant of the Vento.

According to a report on Indian Autos Blog, the Volkswagen Vento TSI will return a fuel efficiency of 16.93 KMPL, which seems to be very impressive for a powerful turbocharged engine mated to an automatic transmission.

News has been going around the internet that Volkswagen is thinking of replacing naturally-aspirated engines in its lineup with turbo-charged units. Volkswagen will do the same in India, albeit a bit slowly. The most recent turbo-charged engine equipped cars launched in India have been the Polo GT TSI and the Polo GT TSI, both high performance variant of the Polo. Now the Vento will also receive the same treatment, with the launch of the Volkswagen Vento TSI.

The more powerful Vento will not get the GT moniker because Volkswagen doesn’t intend to market it as a sporty variant of the car. The highlights of the the car would be the higher power output from a turbocharged unit, which is mated to a dual-clutch gearbox. 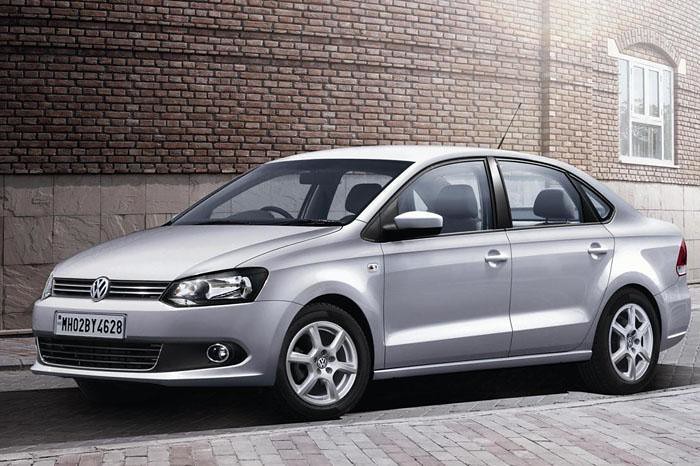 The Vento TSI will get the 1.2-litre turbocharged, 4-cylinder petrol motor and the 7-speed DSG transmission (we do not know if VW will offer the car with paddle-shifters) from the Polo GT TSI. Expected to churn out the same numbers as the Polo, 103 BHP @ 5000 rpm and 175 Nm @1500-41000 rpm, the Vento TSI could replace the Vento 1.6 Highline AT variant. The 1.6 Highline AT at present, as the name suggests, is powered by a 1.6-litre engine that puts out 103 BHP @2550 rpm and 153 Nm @ 3800 rpm and is mated to a conventional 6-speed Tiptronic automatic transmission. The other 1.6-litre engine equipped variants are expected to stay.

Design wise, we do not expect Volkswagen to add anything other than a ‘TSI’ badge on the bootlid. It will have the top end Highline trim, which means it will be fully loaded. Exterior features include body-coloured door handles and ORVM covers, 15-inch alloy wheels, chrome strip on the bootlid, chrome fog lamp surrounds etc. Inside you’d get letherette seats, leather steering-gear lever-handbrake cover, chrome interior trim etc.

Keep tuned in to this post to know more about the Volkswagen Vento TSI. Leave your comments on the car in the comments section below