The Ford Figo / Ka has been one of the best selling cars for Ford globally, the next generation of the car will arrive in international market in 2014. Ford has started testing the 2015 Ford Figo, and spy shots of a test mule have been published online. This particular mule was spotted in Brazil.

The 2015 Ford Figo has been internally code-named the B562, and from the looks of the test mule it has been given a thorough redesign at least on the outside. The 2015 Ford Figo will confirm to Ford’s new design language that the company has been introducing across it’s products worldwide. This includes a large Aston Martin-like grille and appealing sharp design all around the car.

Ford has revealed an almost production ready version of the 2015 Ford Ka Concpet or the 2015 Ford Figo as it may be called when it is launched in India. The concept was showcased at Ford’s ‘Go Further’ event at Barcelona, Spain. The ‘concept’ now gets production-spec halogen bulb, multi-reflector headlamp units, halogen-bulb equipped tail-lights, new alloy-wheel design that could make it to the car when it is finally launched. Rest of the design features remain the same as seen on the concept showcased in Brazil earlier in November 2013 (read update below). Ford may showcase the car at the 2014 Indian Auto Expo in February. Check out the photos of the car below, these photos have been taken by autoblog.it :

What do you think of the car? Let us know in the comments section below.

Ford has showcased the 2015 Ford Ka Concept in Brazil, this is basically how the 2015 Ford Figo could look like when it is launched in India later next year. The Ford Figo could be a carbon copy of the Ford Ka, or receive some design inspirations from the car shown. Check out the photos below:

Though Ford is calling this a ‘concept’ it is pretty much a prodcution ready car, and most if not all of the components featured here will be carried over to the final car that you and me would be able to drive on the road.

We’d love it if Ford brings the Ka concept as it is and rebadges it the Figo. Reason? For one it looks very good, the proportions are right, the Aston-Martin-isque grille is not a oddity like it is on the new Mondeo. There are hints of the Ford Focus and the Ford Fiesta hatchback around the car. Secondly, this is going to be the car that will be offered with the highly acclaimed 1.0-litre EcoBoost engine when launched, and if Ford does not tune it down much it will be one the best driving cars us Indians have a had a chance to lay our hands on in a very long time. Thirdly, it is going to be lighter (read update below), which means better fuel efficiency and better performance than the current car.

Ford is expected to launch the Ka in Brazil around March 2014, and we expect it to be launched in India soon after.

A report by Auto Express’ gives us new information on the 2015 Ford Figo. The new car will be based on the current Figo platform, which itself was derived from the previous gen Fiesta. The platform will be made lighter by using thinner, but stronger steel panels all around the car which in turn will make the car more efficient and more fun to drive. The car will be powered by a 1.0-litre engine, which can either be turbocharged or non-turbocharged. It will be interesting to see what Ford comes up with, but we have high hopes for the 2015 Ford Figo. Keep tuned in to Car Blog India for more news. Do leave you thoughts in the comments section below. 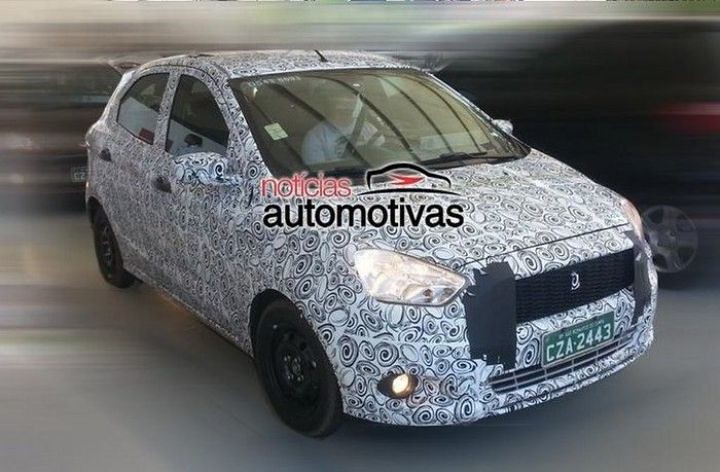 Apart from the huge grille, the 2015 Ford Figo gets a more sculpted bonnet, the front bumper with the air-intake and a lower lip and headlights which look similar to those found on the Hyundai i10.

The side panels seem plain, with minimal design features. What we can make out is that there will be one line running from the headlights, under the door handles and continue onto the top of the tail-lamps. There also seems to be a small curved surface at the bottom of the doors. Otherwise the side seems devoid of any design elements, the camouflage is effective! 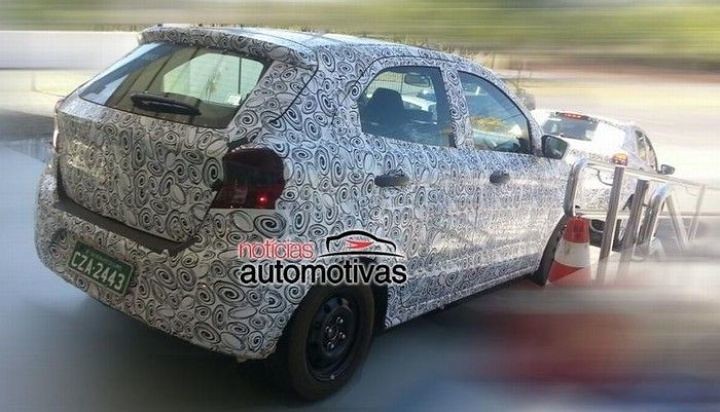 From the rear the changes to the 2015 Ford Figo are more apparent. The tail-lamp position has been shifted from being on the pillars beside the rear-windscreen to the normal position lower in the body. They look similar to the ones found on the Volkswagen Polo or the BMW 1-Series. The windscreen is heavily raked and the bulge below it runs along the legth of the hatch door, and onto the tail-lamps. There seems to be a spoiler attached on top[ of the windscreen, meanwhile the bootlip on the bumper is very prominent.

The new hatchback could do what the EcoSport has done for the company in the compact-crossover market in India. The Figo is already popular in India as a value for money, spacious and fun-to-drive hatchback, the 2015 model will reaffirm that belief even more. There is a chance that Ford could offer the car with the brilliant 1.0-litre EcoBoost engine that powers the EcoSport.

What changes do you think that the 2015 Ford Figo should receive when it comes to India? Let us know int he comments section below.