We recently reported that Yamaha was working on V3.0 for the R15 which would come with some mechanical upgrades but as it turns out, the news was a hoax. Yamaha was instead working on bringing new colour schemes to the bike and has now launched the 2014 Yamaha R15 2.0, its engine has been upgraded to comply with BS4 standards. The four new colours that have been added are Invincible Black, Raring Red, Grid Gold and Racing Blue.

The Grid Gold colour scheme was showcased at the Auto Expo 2014 earlier this year. The pricing has been kept different for different colours by Yamaha. Raring Red and Invincible Black come with a sticker price of Rs. Rs. 1.10 Lakh (ex-showroom, Delhi) and  Racing Blue and Grid Gold come priced slightly high at Rs. 1.12 Lakh (ex-showroom, Delhi). Yamaha is slowly becoming like Hero MotoCorp which instead of launching actual upgrades from time to time keeps on giving its bikes new colour schemes. 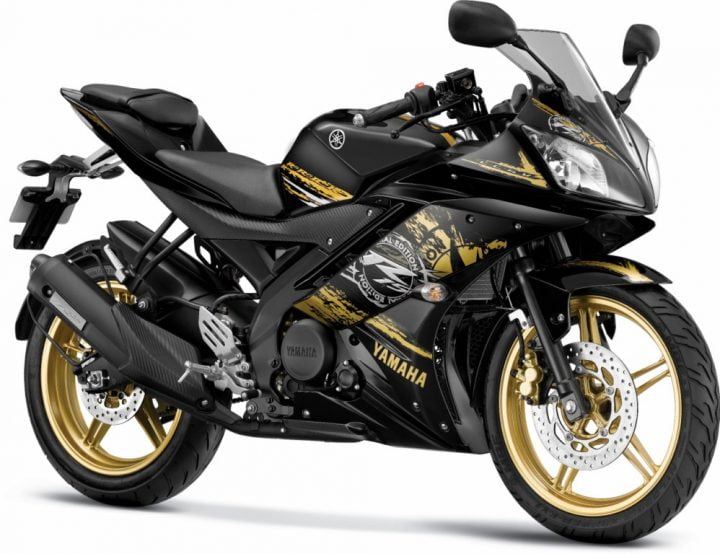 Mr. Roy Kurian, Vice President – Sales and Marketing, Yamaha Motor India Sales Pvt. Ltd. at the occasion  said, “It has been our hallmark to innovate and introduce products that have a strong connect with our customer base. The ‘R15’ has been a significant milestone in that sense in the company’s history and the torchbearer to introduce and promote racing culture in India.  The racing DNA, sporty look and superior technology have been synonymous with the R15 which was graded up to R15 Ver 2.0 in 2011. A lot of thought and hard-work had gone into the conceptualization of the R15 and it has been a huge success for the company. As we launch the R15 Ver 2.0 in 4 new avatars, we are again very confident that this new introduction will help to keep the customer excitement intact in our flagship motorcycle.”

The R15 V2.0 in ints 2014 guise remains bog similar to the current edition of the bike. It gets the same single cylinder 150cc motor that is a liquid cooled, 4 stroke SOHC, 4 valve unit. It has a maximum power output of 17 PS @ 8500 RPM and 15 Nm of peak torque @ 7500 RPM on offer. R15 V2.0 has a Hydraulic disc up front as well as rear and the fuel capacity stands at 12 litres. Yamaha has made a slew of changes in the bike under the hood to reduce emissions but there has been no bump whatsoever in the power department.

The Yamaha R15 has always had its racing dynamics and performance as something that has attracted the youth towards it. But with passage of time and launching of more bikes in the nation like the Bajaj Duke 390, the R15 seems simply overpriced. Yes, it’s a good bike but it is priced way high and bringing new colour schemes every now and them simply doesn’t go down our throats. It’s high time that the R15 V2.0 got itself a mechanical upgrade.