The Hyundai Grand i10 has been a mainstay of Hyundai’s lineup in India since its launch back in 2013. Keeping in mind the car’s age, an update would not have gone amiss. And Hyundai has done just that. Launched in February 2017, the Grand i10 facelift gets new styling details and updates to the features list. But, most importantly, the diesel variant has had a change of heart, which puts complaints of the old 1.1 unit being underpowered to rest. Read our 2017 Hyundai Grand i10 Test Drive Review to find out exactly what Hyundai has done to keep the hatchback ticking. 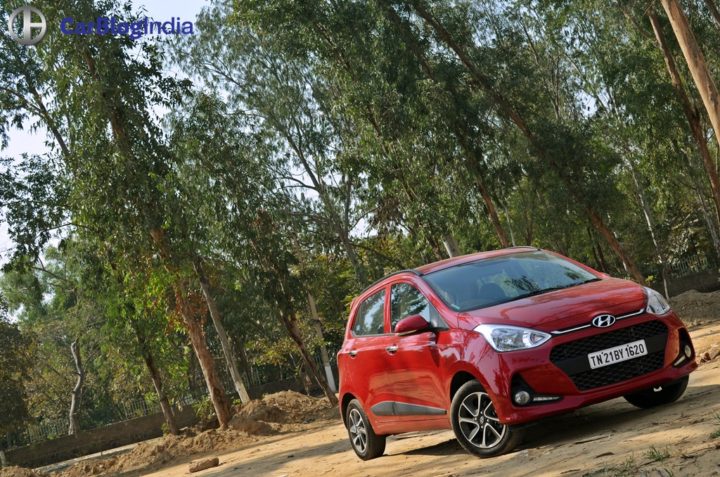 What’s New on the Outside?

There’s a new grille and front bumper that bring the Grand i10 in line with Hyundai’s current design language. The updates to the nose of the  Grand i10 are similar to the ones that made it to the Euro-spec i10 sometime last year. It gets Hyundai’s new ‘Cascading’ grille design – a design feature that every new Hyundai gets. Flanking the grille are boomerang shape fog lamp enclosures that also house LED daytime running lamps. They also serve a functional purpose as the slats above the fog lamps guide air through the bumper over the tires for better efficiency. That rounds up all that’s new with the front end of the 2017 Grand i10. 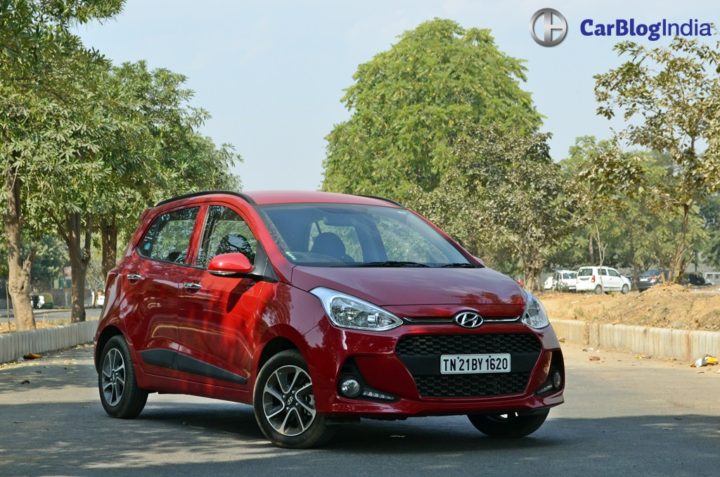 At the back, there is a new bumper with a large slab of black. It houses the circular, slightly oversized reflector units. Besides these changes, there are new diamond cut alloys wheels and a sleeker rub strip on the side. Also, the diesel variants now carry a ‘1.2 D’ badge in place of CRDi, a nod to the new engine that powers the car. The facelift retains the same proportions as before. 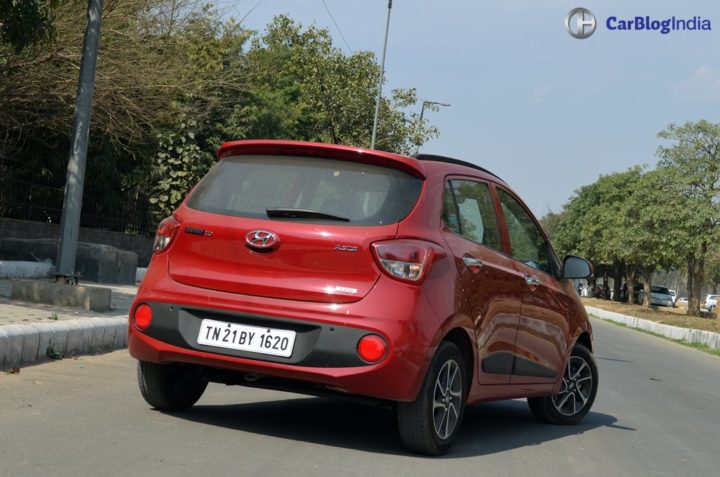 What’s New on the Inside?

In terms of appearance, nothing really. The 2017 model continues with the same well laid out dashboard that we have come to like and appreciate over the years. As always, the quality levels and fit and finish are exemplary. Bits like the steering wheel and gear knob will feel right in place in cars that cost twice as much. You will be hard pressed to find faults in the quality of materials that make up the cabin of the Hyundai Grand i10. 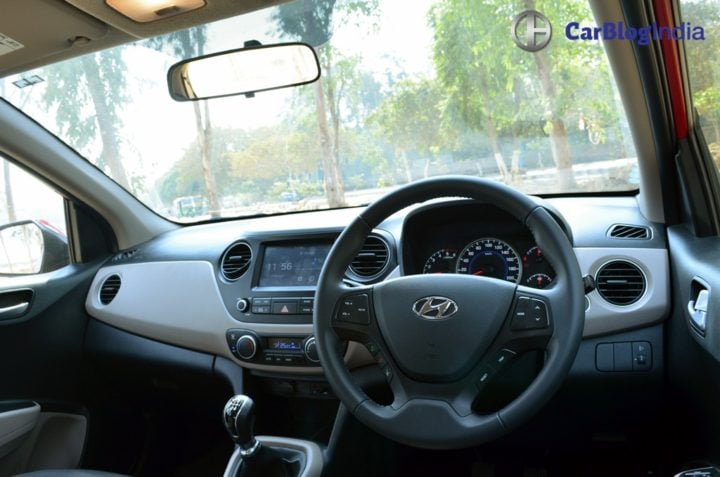 While visually, the interiors remain unchanged, the cabin has made some gains in terms of the equipment on offer. Most notably, the  Grand i10 now gets automatic climate control and a touchscreen infotainment system on the top end Asta trim. The latter is similar to the that does duty on the Elantra sedan. It supports, apart from the basic AUX, USB and Bluetooth, Apple CarPlay and Andriod Auto. The unit is intuitive to use and responds very well to touch inputs. It also doubles up as the display for the reverse parking camera, another addition to the features list. 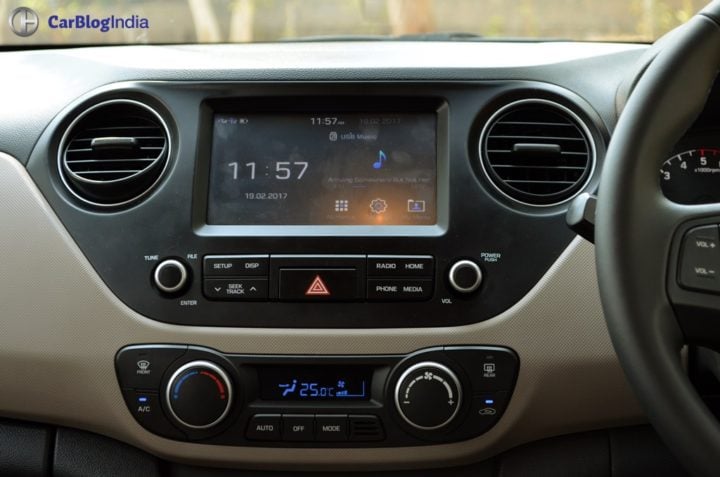 Even the lower spec Sportz and Sportz (O) trims get a touchscreen unit, but not the same one. They feature a 5-inch unit, which doesn’t boast the same number of functions as the bigger one. Also on offer are electrically adjustable ORVMs with auto fold function, keyless entry and go, rear AC vents, features the Grand i10 already had. We would’ve appreciated if Hyundai had also added speed sensing door locks and a distance to empty read out.

What’s New Under the Hood?

There’s a new 1.2 L Diesel under the hood of the 2017 Grand i10. Engine capacity has gone up from 1120 cc to 1186 cc bringing it at par with its rivals. Power is now up to 75 PS and peak torque stands at 190 Nm available from 1750 RPM to 2250 RPM. Being a 3 cylinder unit, the engine still vibrates quite a bit at idle, but things smoothen out once on the move. It feels smooth and responsive right from the get go with barely any noticeable turbo lag. 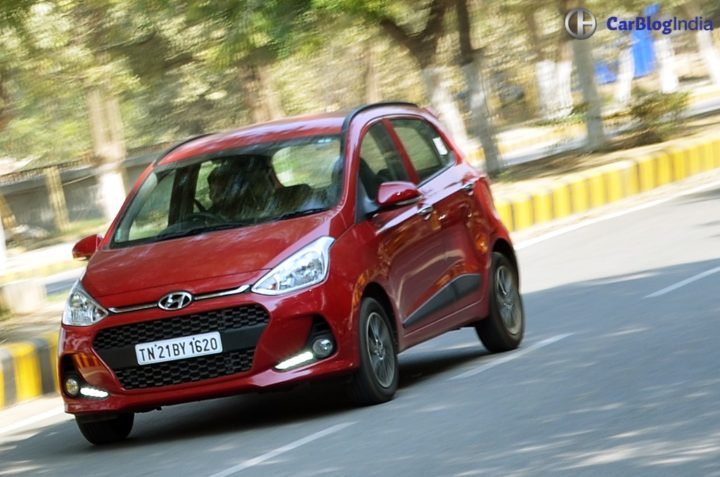 Thanks to the extra power, the Grand i10 diesel now feels much quicker and overtaking slow moving traffic feels a lot easier. Clutch action is still a bit springy so there are slight chances of stalling the car off the line. Transferring power to the front wheels is a 5-speed manual transmission that offers smooth gearshifts and frankly, is an absolute delight to use. The new engine is very tractable and does not require you to work the gearbox to extract the most out of it. Even at lower speeds in a higher gear, the Grand i10 pulls well without warranting a downshift. Fuel efficiency has gone up slightly and now stands at 24.4 KMPL overall.

Petrol variants of the Grand i10 continue with the same 1.2 L as before in an identical state of tune. Transmission options include a 5-speed manual and a 4-speed automatic.

Has the Ride and Handling Changed?

Hyundai has further improved the ride and handling characteristics of the Grand i10. The Grand i10’s suspension setup does a commendable job of ironing out bumps. In fact, over the same stretch of road, the Grand i10 felt much more comfortable than its rivals. The Grand i10 boasts the ride quality of much more expensive cars. High-speed stability is confidence inspiring as the car feels planted even at triple digit speeds. Even under heavy braking, the Grand i10 remains stable. Its brakes offer good bite and pedal action is nice and gradual. At city speeds, the steering is light and easy to use. It weighs up quite well as speeds build up, but there isn’t much on offer in terms of feedback. Overall, the ride and handling of the Grand i10 is far from sporty, but it is exactly what customers in this segment look for. 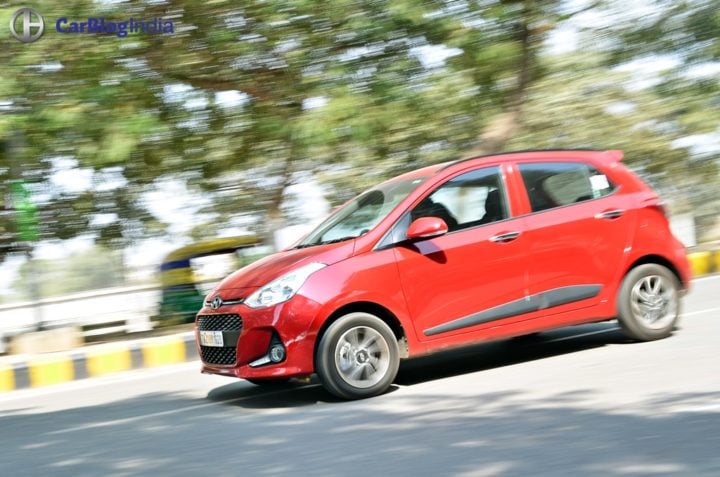 Before we list out points that work in the 2017 Grand i10’s favour, here are some that don’t. For starters, it has been around for almost four years so, it is not exactly new. In terms of safety, the lower and mid level trims disappoint as the only standard feature is a driver side airbag. Dual front airbags are reserved only for the Sportz, Sportz (O) and Asta trims while ABS is available only on the top-end Asta trim. 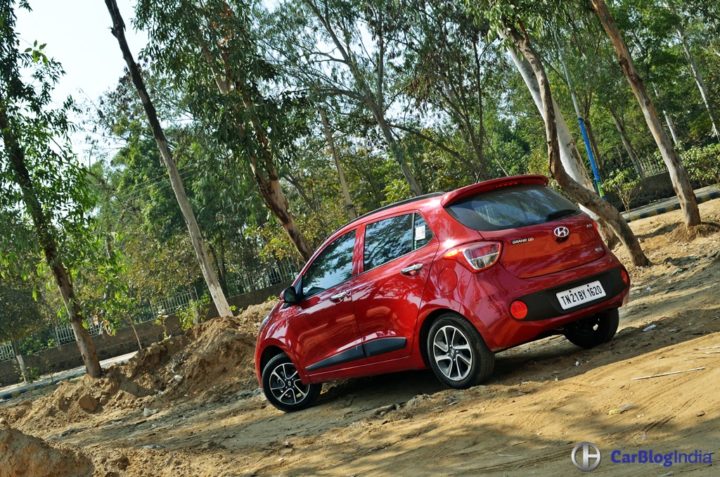 The Hyundai Grand i10 is a smart, solidly put together hatchback that offers good levels of equipment and decent space for five. The new diesel engine ensures it doesn’t feel underpowered. Ride quality is exemplary as it strikes the right balance between comfort and handling. The addition of new features ensure it boasts a healthy list of equipment. All in all, we do not see any reason why the Hyundai Grand i10 will not continue posting strong sales month after month. 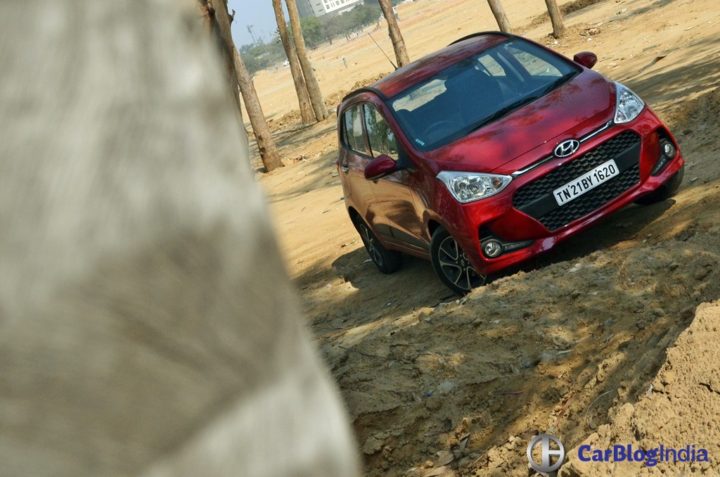 What do you think of our 2017 Hyundai Grand i10 Test Drive Review? Do let us know via the comments section below.