Mahindra became the first-ever car manufacturer to enter the Micro-SUV segment with the KUV100. The KUV100, or any Micro-SUV, for that matter, targets the B-segment hatchbacks. Sadly, however, the KUV100 could never really set the sales charts on fire and its sales were further affected by the launch of the Maruti Ignis, which left a huge dent on the already mediocre sales performance of the KUV. Now, it looks like Mahindra will soon launch the KUV100 facelift and try to improve the sales performance of the micro-SUV. The 2017 Mahindra KUV100 facelift was recently spied testing by one of our friends, who managed to take images of both the exterior and the interior. Read on for all the available info on the new 2017 Mahindra KUV100 facelift launch date, price, and specs. 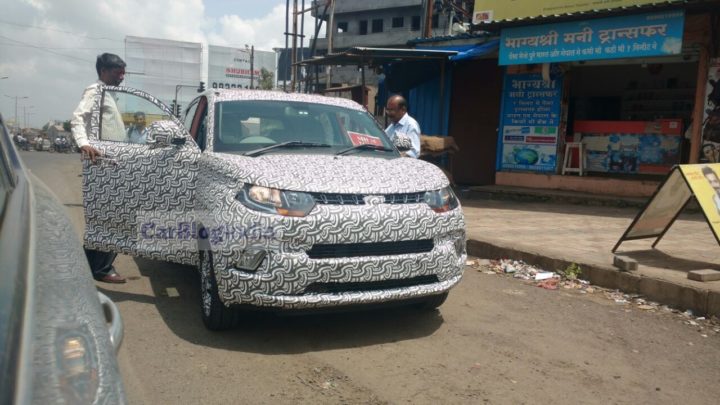 While Mahindra is yet to announce the launch date of the KUV100 facelift, it looks like the car is in its penultimate stages of road testing. It looks really likely that the updated KUV100 would launch during the fast approaching festive season. The increased demand for new cars during the festive season should help the refreshed KUV100 to have a good start of its new innings. The new model could go on sale as the new 2017 Mahindra KUV100 NXT.

The KUV100 facelift, much like the current model, will rival mainly the Maruti Ignis. Therefore, it’s of utmost importance for Mahindra to price the facelift very competitively. Other than fresh looks, and probably a longer list of features, Mahindra could even come up with an AMT variant. It may be noted that both the Petrol and the Diesel models of the Ignis offer an AMT option. We expect the prices to start at Rs 4.5 lakh and go all the way to Rs 7.5 lakh.

There won’t be any change in the specifications of the KUV100. This means that this micro-SUV will continue to come with the three-cylinder Petrol and Diesel engines that are available on the current model. Right now, among the biggest issues with the KUV100 are the really low refinement and high NVH levels. The facelift is likely to be devoid of such issues.

There won’t be a significant change in the mileage. Currently, these 1.2-litre engines offer a claimed mileage of 18.15 KMPL (Petrol) and 25.32 KMPL (Diesel). 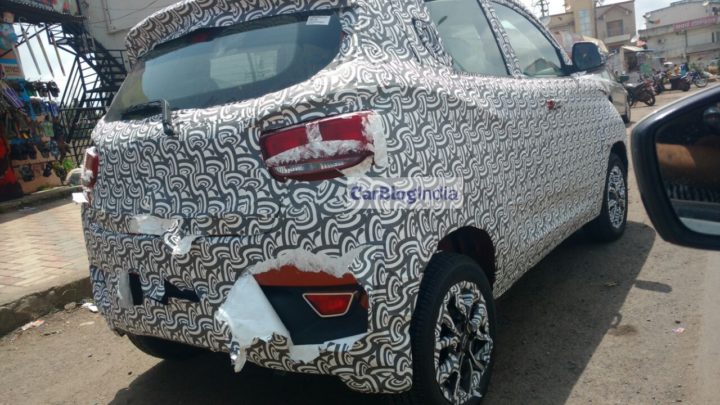 The facelift will come with a new styling and a handful of new features. The most important of these additions will be the new touchscreen infotainment unit.

There isn’t a major change on the inside. From whatever we could observe in the spy images we have here, the interior seems to have been left largely unchanged. That said, the center console does get a revision to accommodate a touchscreen infotainment unit. This is an important addition, considering the Ignis offers the excellent SmartPlay infotainment unit on the top-end models. A highlight of the KUV100 is the front row of seats, which offers a bench-like arrangement to accommodate up to 3 passengers.

There won’t be any major changes in the exterior design of the new 2017 Mahindra KUV100 facelift. However, the car gets a set of styling updates that will work together to make this car look fresher and more modern. While the KUV100 facelift you see in the spy images here wears a heavy camouflage, a close look does reveal some details. Up front, the car will get a new grille and a set of new headlamps. The car also gets an updated set of bumpers and new design alloy wheels.