Mahindra TUV500 in the Works

In a bid to further consolidate its presence in the ever popular SUV segments, Mahindra & Mahindra is developing a larger version of the TUV300. The TUV500, as it may be called, will be a longer version of the TUV300 compact SUV. It will boast three proper rows of seats. Mahindra already has a presence in the 7-15 lakh space, with the likes of TUV300, NuvoSport and XUV500 having established themselves in the market. With the launch of the TUV300 Plus, Mahindra should be seen further consolidating its position in the market. Prices of the TUV 300 Plus should start around Rs. 7.5 lakh. Recently, a test mule was also spotted on public roads. Read on for all the details on the Mahindra TUV300 Plus Launch Date, Price, Specifications.

The launch of the Mahindra TUV500 is expected to take place in February 2018 at the Auto Expo 2018. Mahindra’s sub 4 meter SUVs, viz. TUV300, NuvoSport and KUV100, are facing heat from fresher rivals. The strong selling XUV500 has now come under threat from the new Tata Hexa. There are some chances that the new TUV300 XL would replace the Xylo.

Spy images and test mules show that the new model isn’t too far from completion. Mahindra seems to have commenced development and testing at its research facility in Tamil Nadu. Rumours abound that the upcoming SUV could also be called as the TUV300 XL. Test mules of the upcoming Mahindra SUV have been spotted with camouflage on multiple occasions.

While the 1.5 L mHawk is likely to be carried over, the TUV500, aka TUV 300XL, could even share its engine with the Scorpio. The 2.2 L mHawk diesel that powers the Scorpio produces 120 BHP of max. power and 280 Nm of peak torque. It comes mated to a 5-speed manual or a 6-speed Automatic. The TUV500, however, is likely to get the Manual Transmission only.

it will come with a different powerplant under its hood. The Mahindra TUV300 Plus, as reported by us earlier, gets a 120hp, 1.99-litre engine. This is the same motor that is available exclusively on the Mahindra Scorpio sold in the Delhi-NCR region.

If the TUV500 draws power from the same mHawk100 engine as the TUV300 and NuvoSport, it could return an over fuel mileage close to 17.5 kpl.

According to our estimates, the TUV500 could cost around Rs. 1-1.5 lakh more than its younger sibling. As we mentioned earlier, it will be interesting to see how Mahindra positions it with respect to their other products, especially the Scorpio, which retails in the Rs. 10-15 lakh bracket. The TUV300 and NuvoSport are priced between Rs. 7 and 10 lakh.

The TUV500 will, more or less, resemble an extended TUV300. Mahindra could extend the tail a little to accommodate a third row of seats, similar what we have seen with the Bolero and Bolero Plus models. Apart from the extended tail, the rest of the UV will largely be similar to the compact SUV. Based on the latest spy shots, the grille, headlamp, bumpers, etc are identical to the TUV300. New additions could include a new alloy wheels design and LED daytime running lights. Without the restriction of having to limit the length to 4 metres, the TUV500 could look more proportionate in comparison to the TUV300. 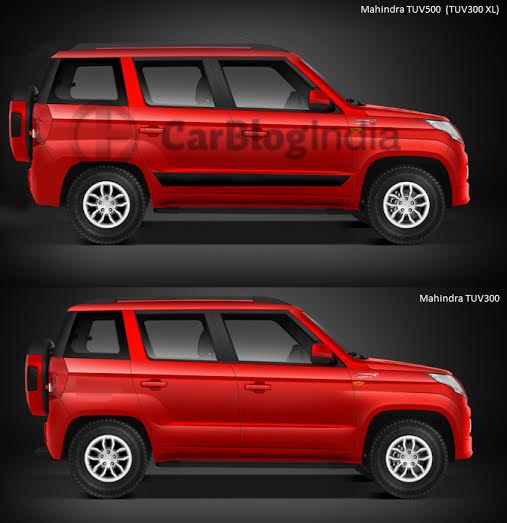 Much like the exterior, even the interior will remain identical to the TUV300’s. It will get the same two-tone dashboard, steering wheel, instrument console, etc. Even the features list will be carried over unchanged. A 2-DIN audio system with AUX, USB and Bluetooth support, dual front airbags, manual air conditioning, etc. will all find their way into the equipment list of the TUV500. Top-end trims of the TUV500 could feature a touchscreen infotainment system with navigation support and a reverse parking camera display.