Tata Hexa SUV – All You Need to Know

The Hexa SUV was unveiled by Tata Motors at the 2016 Geneva Motor Show in its concept form following which it made its India debut at the 2016 Auto Expo. The Hexa is an all-new model that’s got a crossover-ish styling but hardware suitable for mild off-road excursions. The new Tata Hexa launch took place on January 18, 2017. Tata Hexa price in India starts at Rs. 11.99 lakh (ex-showroom Delhi). At such a price point, the Hexa rivals the Mahindra XUV500. Test Drives of the new Hexa have already commenced at authorized Tata dealerships. CLICK HERE for TATA Hexa Test Drive Review. Also, read on for new Tata Hexa Price, India launch details, specifications and mileage- 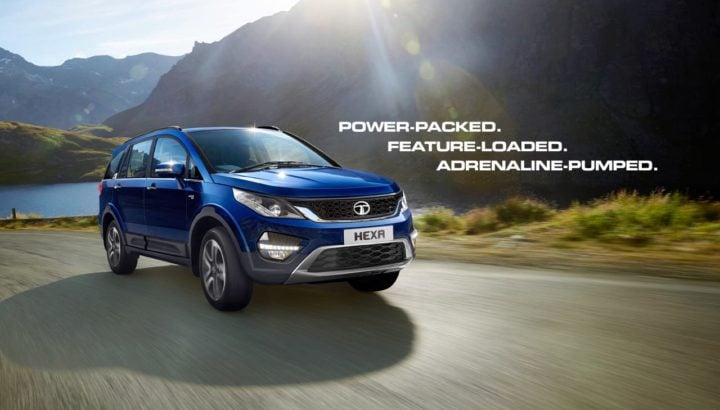 Tata has a number of new launches lined up for the Indian market. Over the next few months, Tata will launch the Tigor aka Kite 5 and Nexon compact SUV. The Hexa becomes the most expensive Tata model around. Launch of the Hexa will be followed by the Tiago AMT, Kite 5 and the Nexon in 2017. You can check out the new Hexa at recently launched Hexa Experience Centre. 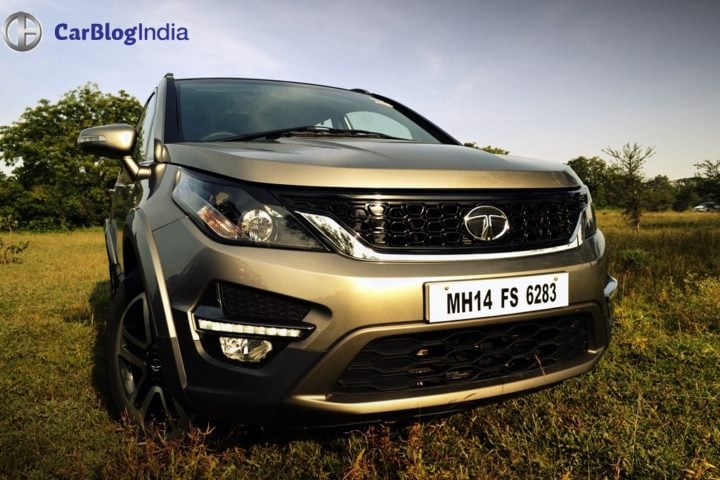 Please Note- All the above trims will be offered in both 6 Seater and 7 Seater configurations.

Prices of the Tata Hexa start at Rs. 11.99 lakh (ex-showroom). At this price point, the Hexa comes across as quite a value-for-money proposition. Bookings for the Hexa are already open and Tata claims the Hexa received around 250 bookings in just a couple of days.

The Hexa could cost slightly less than the XUV500. It will also cost less than the Innova Crysta. However, it is more expensive than the Safari Storme. As is the case with most Tata products, it scores high on value for money. 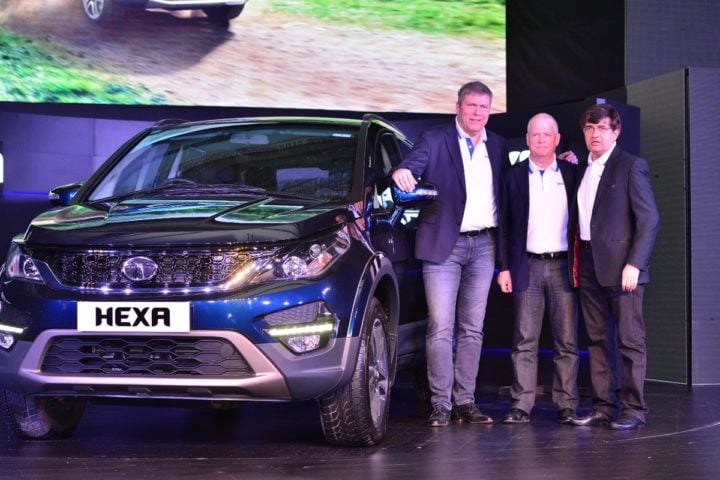 We expect the Hexa have a higher average mileage than the Safari Storme. This means that the Hexa could offer a mileage of 12 KMPL in city and around 15 KMPL on the highway. 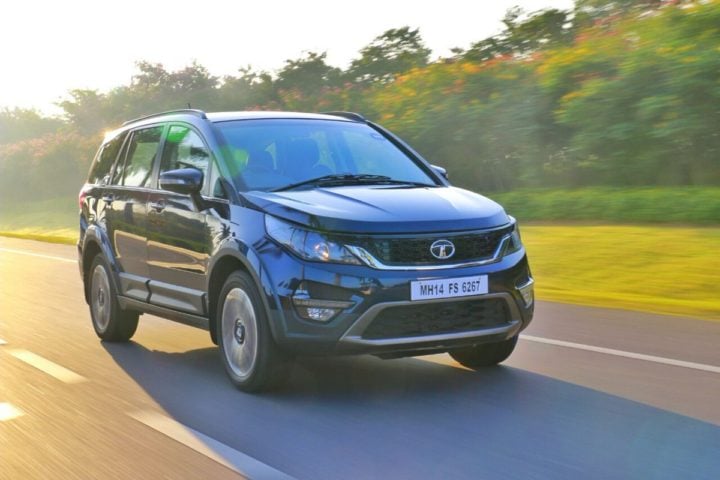 Seen above are the official Tata Hexa specifications. The engine in the Tata Hexa is the familiar 2.2 litre Diesel engine. It is available in two guises – VARICOR 320 and VARICOR 400. The more powerful motor produces 154 bhp and 400 Nm. VARICOR 320 offers 149 BHP and 320 Nm. These engines also power the Tata Safari Storme. The XM and XT trims of Hexa will be available with either a 6-speed manual or a 6-speed automatic transmission. A torque on demand four-wheel drive system is available on the top-end XT variant. 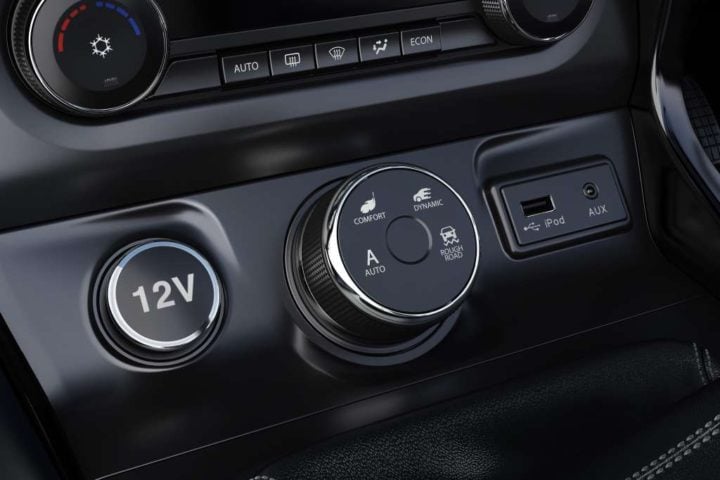 These features will make the Hexa the most loaded car in its price range. Features such as the 10-speaker JBL Audio System and Super Driving Modes make Hexa stand out. The Hexa scores well even on the safety front.

Okay, there’s a slight resemblance to the Aria, but Tata has done enough to give the car its own unique identity. Up front, the new bonnet is much flatter and features a clam-shell design. The headlamps look sophisticated and the grille with its wide, chrome insert does enough to mask the similarities. The bumper is the main highlight here which features a wide lower air dam with brushed aluminium surrounds. The edgy, muscular fog lamp housing features LED daytime running lights resulting in a very appealing front end.

While Tata insists Hexa is an all-new model, there’s still some resemblance to the Aria in the side profile. However, the Hexa features a plastic cladding for the wheel arches. Interestingly, the cladding features a Range Rover Evoque like kink in the curve which could possibly be a hint towards a greater involvement from Land Rover engineers. The rear has been completely redone. It now features horizontal Volkswagen like tail lamps adding a much-needed dose of character to the back end, as do the dual exhausts, the faux skid plate finished in brushed aluminium, blacked out pillar, etc. 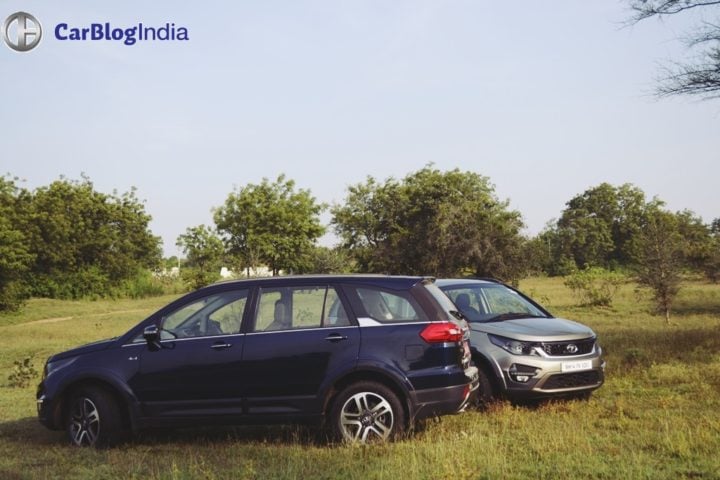 The Tata Hexa features all-black interiors and one can clearly see hints of the Zest and Bolt’s dashboards inside. The centre console features a prominent touchscreen with piano black surrounds and the overall angular theme works quite well. The steering wheel has been lifted straight from the Zest featuring audio and phone controls and finished in black with silver accents. The concept showcased at Geneva featured a six-seat configuration with captain seats for the middle row. There are 12V power sockets and A/C vents for the second and third-row passengers. The cubby hole lined roof from the Aria has been ditched in favour of a much neater fabric lined roof. Occupant safety is ensured by the 6 airbags on board, Electronic Stability Control, projector beam automatic headlamps and rain sensing wipers. 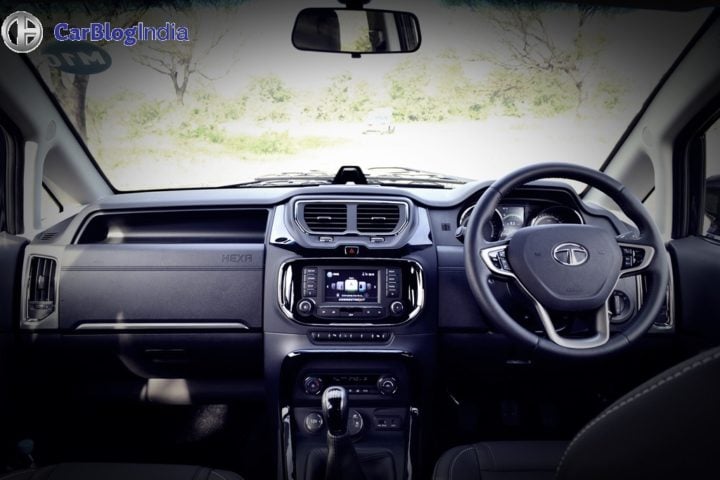 The design of the production version of the Hexa is not a major departure from the concept form, on the basis of what was showcased at the Auto Expo. The Hexa is surely be a very good looking crossover. It is likely to stir things up quite a bit in the 11-18 lacs space. Tata has clearly taken a huge leap forward with the Hexa concept. This is in continuation with what it did with the Zest and Bolt. The Tata Hexa SUV is another promising prospect from Tata Motors and will hopefully perform much better than the Aria. Watch this space for more. 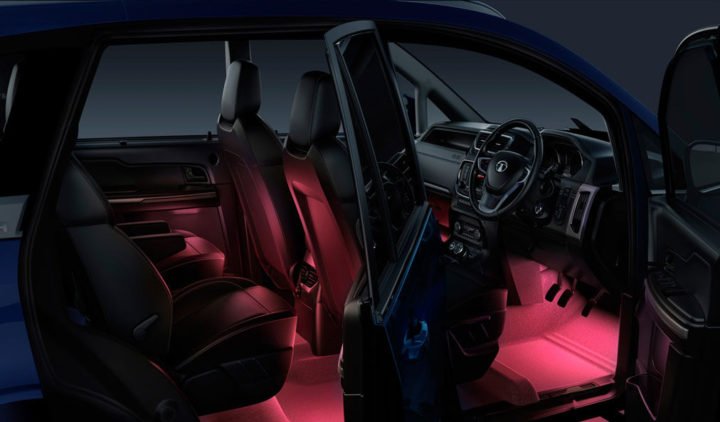 Tata is offering the Hexa in five paint shades including

Tata’s upcoming crossover is on sale with the 2.2-litre Varicor 400 diesel engine. We have already seen this engine on the Safari Storme. This unit makes 156 bhp of max power and a peak torque of 400 Nm. A six-speed manual is being offered as the standard transmission option. There is also be a 6-speed automatic transmission option on offer. The Tata Hexa gets an All Wheel Drive setup along with ‘Super Driving Modes’.

Stay tuned to Car Blog India for more Tata Hexa price and India launch details. Also, what do you think the Tata Hexa price in India should be? Let us know by commenting below. Hope you checked out our Tata Hexa Test Drive Review.