Launched in 2010, the Tata Aria turned out to be a flop in the market. Tata went back to the drawing board and following a really comprehensive overhaul, they have now come up with the Hexa. The Hexa boasts a highly updated exterior, a premium cabin and additional features. It promises to be much better than the Aria and Tata is hoping the MPV-SUV crossover will click with the public. Basically, the Hexa looks poised to complete what the Aria started. Of course, Hexa looks far more accomplished than the Aria. But comparisons are already being drawn. We compare the two in our Tata Hexa vs Tata Aria post here to put all doubts to rest. Also See- Upcoming New Tata Cars 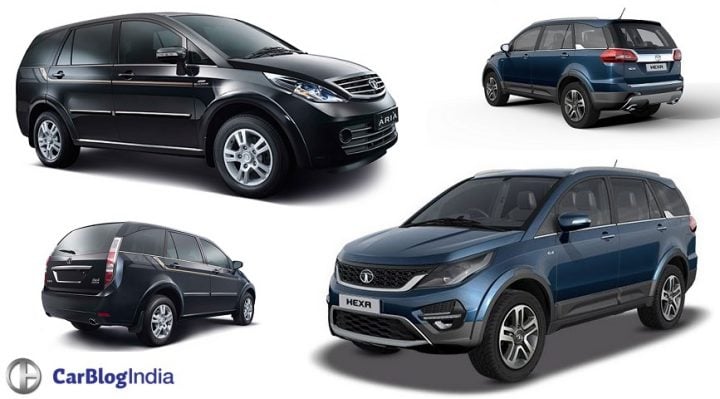 As expected, Tata has priced the new Hexa very aggressively. It comes in at a starting price of Rs. 11.99 lakh (ex-showroom Delhi). Towards the end of its life cycle, the Aria was available with heavy discounts and a starting price of just Rs. 8.85 lakh! Top-end variants of the Hexa go up to 17.49 lakhs.

The top-end Hexa features Tata’s Varicor 400 diesel engine that makes 154 bhp of max power and 400 Nm of peak torque. It makes around 6 bhp more power and 80 Nm more torque. Both manual and automatic transmission options are on offer. The entry level Hexa gets Aria’s slightly less powerful engine. Also, the Hexa features 4 driving modes, all wheel drive and Terrain Response System. The Tata Aria and Base Hexa make do with a 5-speed manual gearbox.The higher models get a choice of 6 speed Manual and Auto ‘boxes. Also, expect higher fuel efficiency from the Hexa. 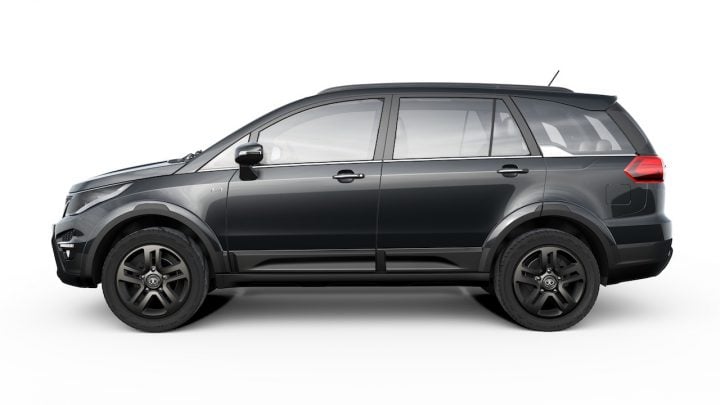 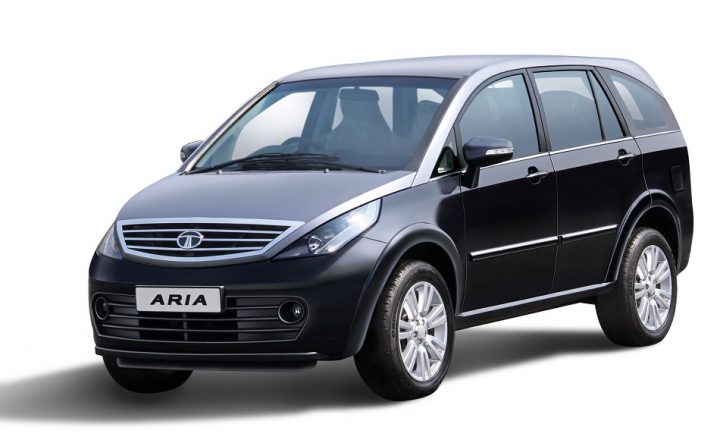 While the Hexa retains the overall SUV-MPV crossover shape of the Aria, the styling is now more butch. The bonnet seems flatter and the chunky bumpers and body cladding add some much-needed ruggedness to the exteriors. In comparison to the Aria, the Hexa features bigger wheels. Instead of the Aria’s vertical tail lamp setup, Hexa gets split LED tail lamps with a thick bar of chrome above the number plate. Bits like the headlamps and overall shape of the Hexa bear more than a passing resemblance to the Aria.

The plain surfaces of the Aria’s dashboard have made way for a more sophisticated design. Gone are the vertical AC vents flanking the centre console. The Hexa gets rectangular AC vents with the centre console housing the touchscreen finding a place below it. Other new bits include the steering wheel, instrument console and the auto aircon setup. For the Hexa, Tata has done away with the cubby holes that line the roof of the Aria. However, it is still easy to notice certain similarities between the dashboard designs of the two crossovers. While the wheelbase of the Hexa remains the same, Tata claims there is more room in the second and third row of seats now. Also, the Hexa’s cabin has an overall darker colour scheme.

The upcoming Hexa is actually slightly shorter than the Aria. However, wheelbase remains the same the Hexa actually has better legroom.

Tata has clearly put in a lot of effort into reinventing the Aria. The Hexa seems like a much better package overall. It looks much better, the engine now makes more power, gets more features and combines the qualities of an SUV and MPV rather well. In fact, it can easily be viewed as an all new product.