Basically a cross between an MPV and an SUV, the Tata Hexa has been launched in India. Showcased at the Geneva Auto Show followed by its India debut at the 2016 Auto Expo, the Hexa gets rugged styling, a smart interior and a powerful engine with AWD. While its direct rivals include Innova Crysta and Mahindra XUV500, the Honda BR-V can also be seen as a rival. You can read all about how they compare with each other in our Tata Hexa vs Honda BRV comparison here. 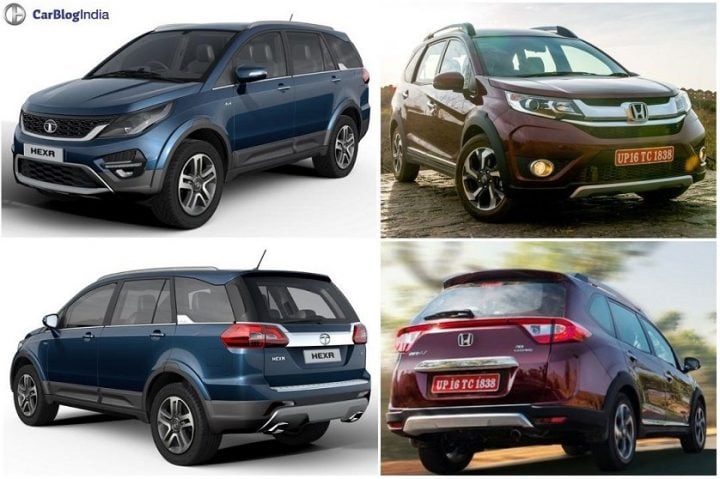 There isn’t much of an overlap in the prices of the Hexa and BR-V. The BR-V range is cheaper. Buyers looking to buy the top end VX trim of the BR-V might consider the entry level trims of the Hexa as an alternative. However, bear in mind, the Hexa is a much bigger vehicle offering much more in terms of performance, space and features. The BR-V’s major rivals include the Hyundai Creta and Renault Duster. The small SUV segment has been dominated by the Hyundai Creta since its launch. The BR-V already struggling to keep pace with its rivals. Talking about the Hexa’s competitors, it rivals the Mahindra XUV500 and the Toyota Innova Crysta.

The Hexa is more feature-rich than the Aria with the addition of a Harman sourced 5-inch touchscreen infotainment system, 10-speaker JBL audio system, ambient lighting, a colour MID, six airbags and more. Honda’s BR-V misses out on the usual set of features we have come to expect from most cars these days including a touchscreen infotainment system with Navigation, and Reverse parking camera. It gets keyless engine start/stop, second row AC vents, three rows of seats, dual front airbags, ABS with EBD, automatic climate control. Since it is a more premium offering than the Honda BR-V, Tata Hexa boasts a longer list of features. Both vehicles come with seating for seven.

Only the 2.2 L diesel that churns out 156 PS and 400 Nm is offered with the top-end trims Hexa. The entry models get a lower state of tune (150 PS-320 NM). This is the same engine that also powers the Safari Storme. This unit is significantly more powerful than the BR-V’s 1.5 L diesel, which produces just 100 PS-200 Nm. Also, the Honda BR-V is available with a 1.5 L petrol that churns out 120 PS and comes with either a 6-speed manual or a CVT unit. The BR-V’s engine and transmission options are identical to the Honda Mobilio and Honda City. Unlike the Tata Hexa, the Honda BR-V is not offered with an AWD system. The 1.5 L i-DTEC diesel that powers all diesel variants of Honda cars in India is notorious for its poor NVH levels.

The design of the Hexa infuses the MPV-like shape with an SUV-like elements such as beefy wheel arches, body cladding, raised ride height, etc. The bonnet seems flatter and the vertical tail lamp setup has been ditched in favour of a more elegant horizontal unit. Tata’s designers have done a good job of adding some much-needed brawn to the Aria’s exterior. The Honda BR-V’s exterior bears some resemblance to the Mobilio. Honda has done well in giving the BR-V its own identity by giving it a new nose, new rear, raised ride height and body cladding.

Tata has given the interiors a makeover as well. The vertical AC vents have now been replaced by horizontal units that sit above the audio system. And a classy all-black colour scheme has been used for the cabin. Like the new Amaze facelift, the BR-V also ditches the Brio‘s quirky interiors for a more stylish setup. It is similar to what we have seen in the Honda Jazz and the City. The Hexa boasts impressive interior quality and fit and finish.

Design – Both the Hexa and the BR-V boast of styling elements that are aimed at making these MPV-derived offerings look rugged and macho. The Hexa surely looks beefier and a lot more muscular than the BR-V. However, at the end of the day, looks are a matter of personal taste really.

Features – Tata Hexa is better equipped in terms of features as it is a more expensive and premium offering.

Specifications – The Tata Hexa gets only a diesel engine. The Honda BR-V is powered by the same 1.5 L petrol and 1.5 L diesel engines as the Mobilio/City. It gets a CVT option as well. Tata offers the Hexa with an optional AWD system.

Price – As always, pricing is crucial. Hexa is more expensive than the Honda BR-V. But the entry level trims of the Hexa are a good alternative to the top end BR-V trims.