The Mahindra XUV 700, the all-new premium SUV from the homegrown automaker is going to launch in India on the 24th of November this year.

It will find its place above the XUV 500 in Mahindra’s product portfolio for the Indian market.

As a result of this, it will stand as the new flagship product for the brand.

Prices are expected to fall in-between the range of INR 25 lakh to INR 30 lakh.

With this, it will compete in the full-sized SUV segment with the likes of Toyota Fortuner, Ford Endeavour and the Honda CR-V.

Written below is a detailed article on everything that you need to know about this SUV. 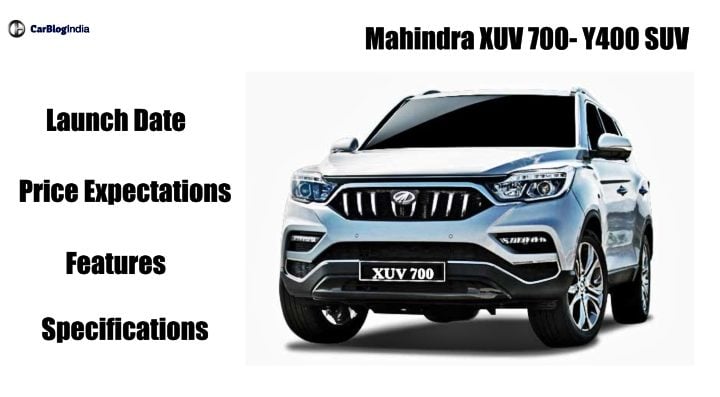 Mahindra has announced that it is going to launch two new vehicles in India ahead of the festive season this year and one after it.

Out of the two launches preceding this year’s Diwali, is the Marazzo (U321) MPV. It is likely that the second one is going to be the Mahindra XUV 700.

Mahindra will be seen launching many new products to establish a stronger foothold in the SUV segment. Among the highlights of the company’s new SUV onslaught will be the new 2018 XUV 700.

It’s expected to hold a price advantage of more than Rs 4 lakh over the likes of Toyota Fortuner and Ford Endeavour. This means prices of the new 2018 Mahindra XUV 700 could start at just about Rs 22 lakh.

The fully-loaded top-end model of the XUV700 could cost roughly Rs 25 lakh. At this price range, the upcoming Mahindra SUV could find itself in the same price bracket as the upcoming Jeep Compass SUV.

The upcoming flagship gets a 2.2-litre Turbo Diesel engine with a max. power of 185 BHP and peak torque of 420 Nm.

It will come with a 6-speed Manual and a 9-speed Automatic transmission. Mahindra could also offer a 225 BHP 2.0-litre Naturally Aspirated Petrol engine at a later stage.

The XUV 700 will initially offer only the 2.2-litre Diesel engine. This oil burner is expected to offer a maximum mileage of 15 KMPL.

Underpinning the 2018 Mahindra XUV 700 is a new body-on-frame chassis that comes from Ssangyong. The traditional construction should improve the ruggedness of the upcoming SUV. Images show that the new SUV borrows in plenty from the design study.

Design elements like a bold shoulder-line and flared wheel arches give this model a really aggressive stance. The XUV 700 is likely to have a long wheelbase of 2,865 mm, which should translate to generous leg space.

Being a premium SUV, the Mahindra XUV700 is going to offer a host of features and creature comforts onboard.

The XUV700 will not score less in terms of its safety features.

As standard, the car is going to offer dual airbags along with ABS and EBD as standard across the range.

Along with this, it is going to come with rear parking sensors, ISOFIX child seat mounts and traction control as well. Higher variants are going to offer up to 8 airbags.

The upcoming Mahindra SUV will be largely identical to the 2018 SsangYong Rexton you seen in the images we have.

However, Mahindra’s designers will give the SUV their own styling touches. Expect a new grille up front, a new set of alloy wheels and, of course, Mahindra badging all around.

On the inside, the new SUV could feature a slightly different steering wheel design and a different colour scheme.

The 2018 SsangYong Rexton is based on the LIV-2 Concept that was on display at the 2016 Paris Motor Show. Much of the design stays true to the concept with the exception of the front grille and bumper, headlamps and alloy wheel design.

The upcoming SUV from Mahindra-SsangYong will feature three rows of seats offering to seat for 6-7 occupants.

Mahindra Alturas Vs Toyota Fortuner- What’s the difference between the two?