The Diesel-sipping variant of the refreshed Chevrolet Beat became one of the first hatchbacks to breach the ARAI-certified 25 KMPL fuel economy figure. Internationally, the Beat/Spark has already been replaced by a new generation model. Although the international-spec version will not make it to India due to the price sensitive nature of our market, there is a new Beat in the pipeline that will arrive next year. Keeping that in mind, the current Beat might find it a little hard to stay pertinent, but it does have sufficient traits to appeal to at least a section of buyers. Recently, we spent a month with this funky li’l car to find out if it has what it takes to fend off the fast increasing heat from the fresher rivals. Read on for our Chevrolet Beat Diesel Test Drive Review 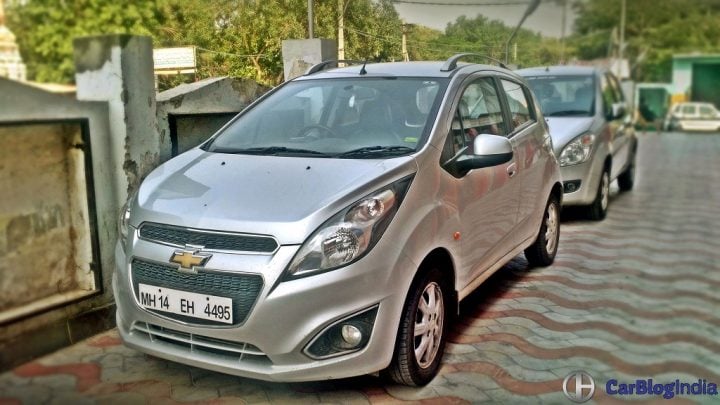 In simple words – this is one of the most stylish hatchbacks currently on sale in India. The Beat didn’t lose much during its transition from a concept to production form. And thanks to the facelift, you get a really heavy nose up front with chunky swept back headlamps and Chevrolet’s signature split grille taking centre stage. That coupled with a rising window line give the Beat a very athletic pose. There are some really strong character lines all around the car. The pronounced wheel arches, sculpted front bumper and a strong character line that flows from the rear door along the tail lamps- the design has quite some bold touches. The roof rails and rear spoiler are such an integral part of the design that it looks incomplete without them. Perhaps the only criticism I can draw of the Beat’s exterior is the fact that it has been around for quite some time now. 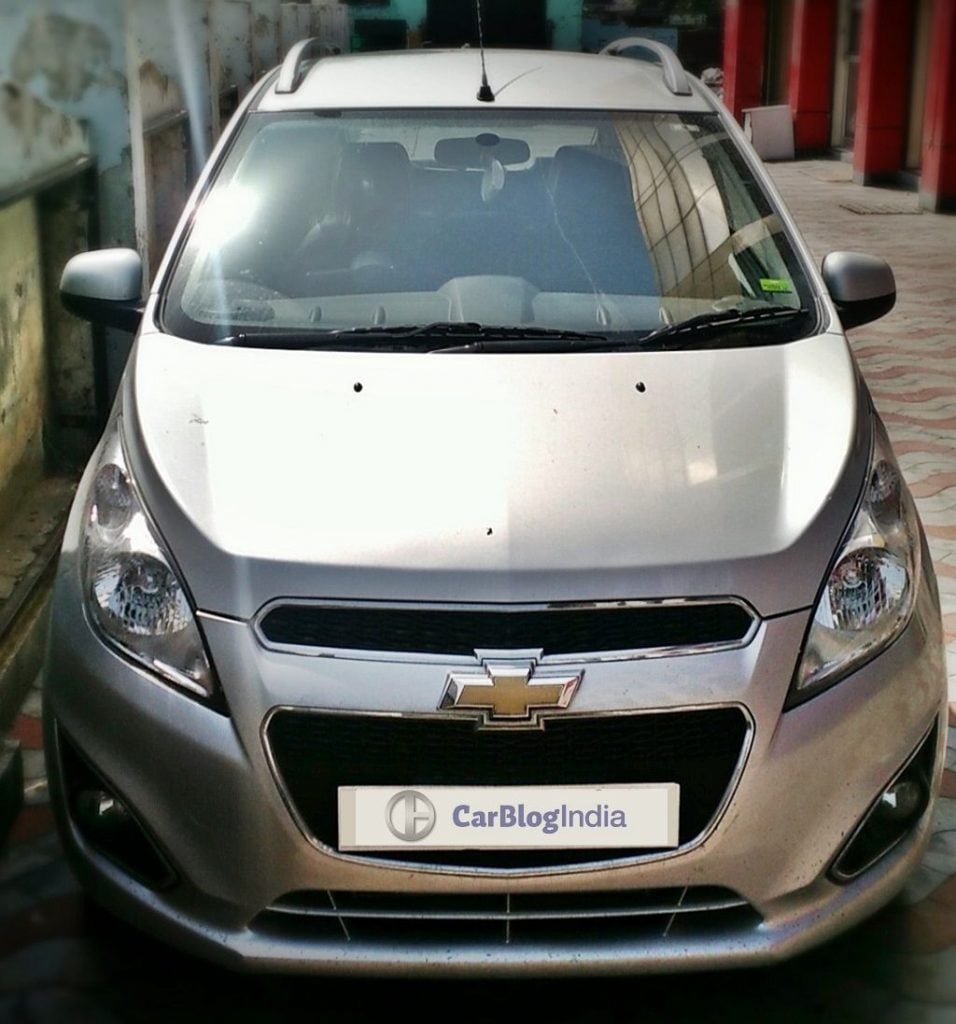 In 2014, Chevrolet did give the Beat a ‘blink and you’ll miss’ makeover. As part of that facelift, it received re-profiled bumpers and minor changes to the tail lights, but that did not help much to infuse some freshness with the design. GM India has announced a new Beat for 2017 and although based on the current car, the makeover could just be what the Doctor ordered.

Well, the interior is truly a reflection of the exterior. The speedo console is mounted on to the steering column and the sportsbike-like speedo and tacho combo is still the funkiest around. That said, I do feel that a digital speedo and an analogue tacho would’ve been more convenient. While most other manufacturers were running after ‘premium’ black beige interiors, Chevrolet India, to our pleasant surprise, stuck to the all-black treatment for the updated Beat. However, the interior is a bit low on features. While you do get the basics like an audio system with AUX and USB support, steering controls, it misses out on Bluetooth connectivity, electrically adjustable ORVMs, and more. Also, past the front seats, space is at a premium. The rear legroom is hardly decent and the boot space isn’t very generous. That said, the rear seat is well bolstered and occupants won’t complain too much as long as the front seats are not pushed too far back. 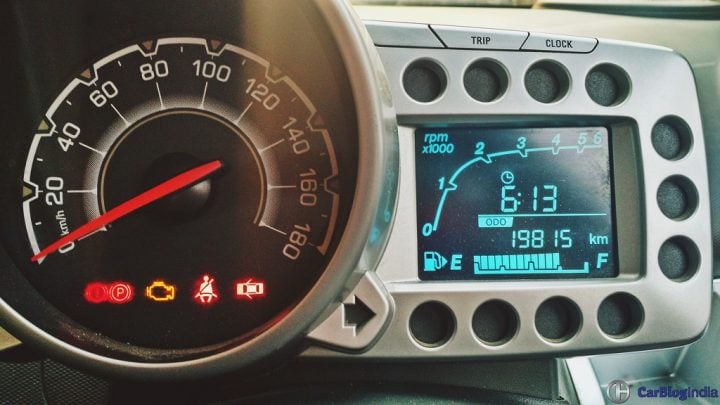 Definitely! It’s exactly what you would expect from a city runabout – comfortable and easy to manoeuvre. The steering is light and makes sneaking in and out of traffic easy. It doesn’t really weigh up enough at high speeds, but then, how often do you achieve high speeds on the eternally congested city streets? The suspension is on the softer side. So you won’t be taking corners aggressively, but you’ll be comfortable over most kinds of roads. We spent a month with the Beat so, naturally, we encountered some really bad patches of roads. To its credit, the hatchback was actually unfazed by most of them, especially if you consider this car’s size and price. In short, the Chevrolet Beat’s ride will make your commutes really comfortable. However, look elsewhere if you’ve got apex-hunting plans. 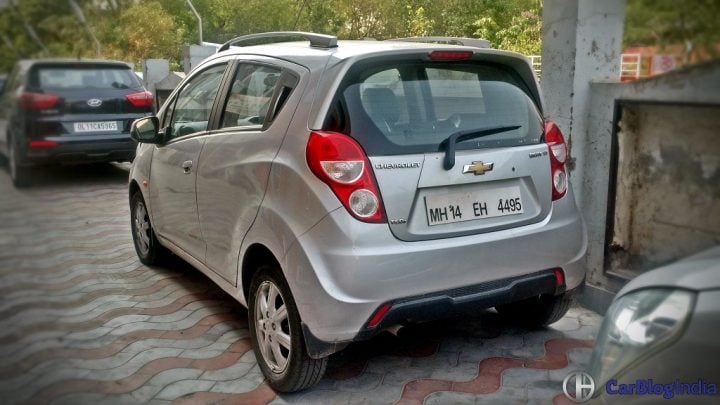 The answer to that depends on what you’re looking for. As far as small capacity Diesel mills are concerned, the Beat’s performance is satisfactory. However, it’s when you hit stretches of expressways that it starts running out of steam. Also, with the car being pretty softly sprung, it’s best you don’t breach the triple digit mark on the speedo by much to keep the car from wallowing over bumps. And then there’s the small issue with the gear lever- It feels very rubbery. There were a couple of instances when I wasn’t sure whether it slotted into the desired gear or not. At higher revs, the engine tends to get whiny so it’s just a lot of noise with only little increment in performance. Chevrolet claims an ARAI-certified mileage of about 25.44 kpl. Obviously, it is very difficult to achieve that in the real world, but the Beat managed to return a very respectable 19 kpl in the city. So the engine’s frugal nature more than makes up for the lack of outright power. 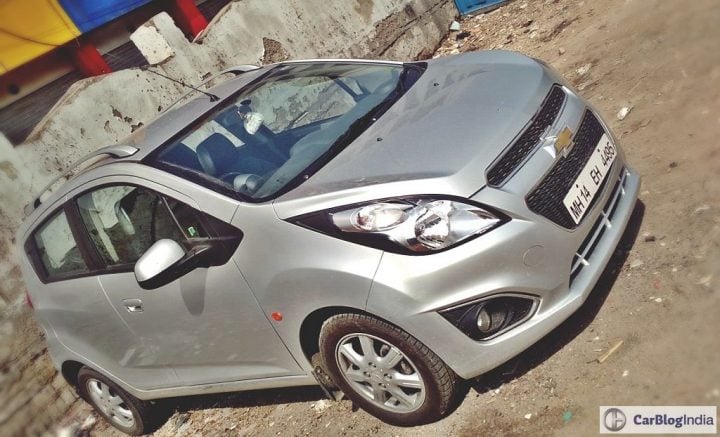 The all-new Chevrolet Beat will be launched in India by early-2017. This means that the current Beat will soldier on for at least half a year more. However, even though we are pretty sure that the next Beat would be an overall better car than this car here, the current Beat does make for a good buy if a frugal Diesel motor and a really funky design is all you desire. Also, the slightly steep price tag is offset by the generous discounts reportedly being offered at the dealer’s end. Yes, we would have liked a longer list of features and a punchier motor, but with its combination of style, fuel efficiency and GM’s fast-improving after-sales network, the Beat does get a bit hard to beat (pun intended). One month with the Chevrolet Beat Diesel has us convinced that this car can hold its own even with the fresher competition around.