Kawasaki has had a pretty successful stint in India thanks to its partnership with Bajaj. Though the Kawasaki Ninja 250R/300R are priced a bit on the higher side to be sales success, the company struck gold with the Ninja 650R. The company is all set to expand its range of offerings in the country by launching two of the most eye-catching and most meanest bikes in their stable. Kawasaki will launch the Ninja ZX-10R and ZX-14R in India sometime in late August 2013. While the Ninja 300R and  650R are brought in via the CKD route, the flagship motorcycles will be brought in via the CBU route.

Kawasaki-Bajaj have launched the Kawasaki Ninja ZX-10R and ZX-14R in India. 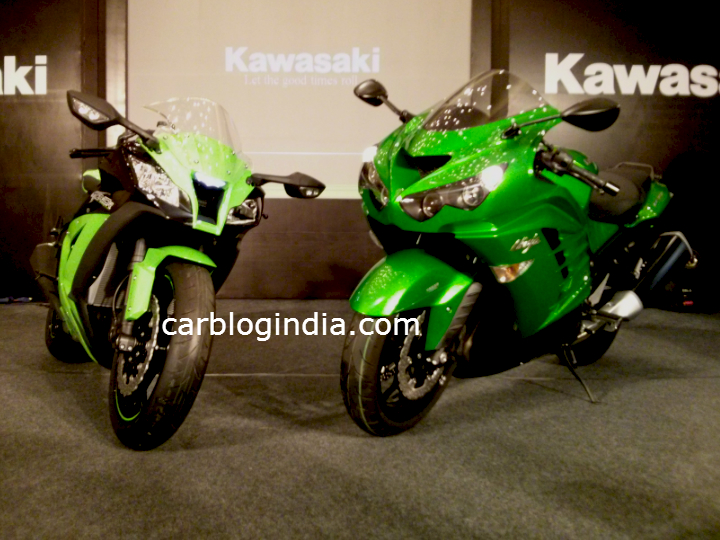 Firstly, let us talk about the younger sibling out of the two, the ZX 10R. It will be pitted against the Yamaha R1 and will be inclined towards track riding. It has a 998c, 4-stroke, 4-cylinder engine that belts out a hair-raising 197 BHP. The engine gets mated to a 6-speed transmission. It comes shod with dual 310 mm discs up front while the rear gets a 220 mm disc brake . It gets ABS and traction control as well to ensure the bike comes to a halt without any drama. The Kawasaki Ninja ZX-14R, the company’s flagship bike, will be up against the Suzuki Hayabusa. Its heart is a 1,441 cc, 4-cylinder motor that belts out a maximum power of 210 BHP. The engine is tamed by a 6-speed transmission. It gets dual 310 mm discs up front and a 250 mm single rear disc. It comes shod with inverted telescopic forks on the front and gets a Uni-Track gas charged shock absorber at the rear.

When launched in late August or early September, the bikes will initially be made available in Pune and introduced to other places gradually. Since they will be coming in via the CBU route, they’ll be priced steeply. Expect the Kawasaki Ninja ZX-10R and ZX-14R to cost around Rs 12 lakhs and Rs 18 lakhs respectively, it is possible though that Kawasaki would surprise us in this aspect. The bikes will be sold through the Bajaj-KTM probiking dealerships in the country.