Mahindra‘s first stab at the compact SUV segment did not taste as much success as they would’ve wanted it to. The Quanto failed to find too many takers and was unable to capitalise on the first movers advantage. But while we were busy criticising the Xylo derivative’s ungainly appearance and while the Ford EcoSport was selling like hot cakes, Mahindra was busy developing a more serious contender. What was earlier being touted as the replacement for the ageing Bolero turned out to be an all new product christened the TUV300 (three double o). The compact SUV has been grabbing a lot of attention since its launch so we decided to borrow one for a few days and find out what the fuss is all about. “Tough and Stylish” is the message that greets you when you turn the ignition. Will it be able to do justice to that claim? Read through our Mahindra TUV300 test drive review to find out. 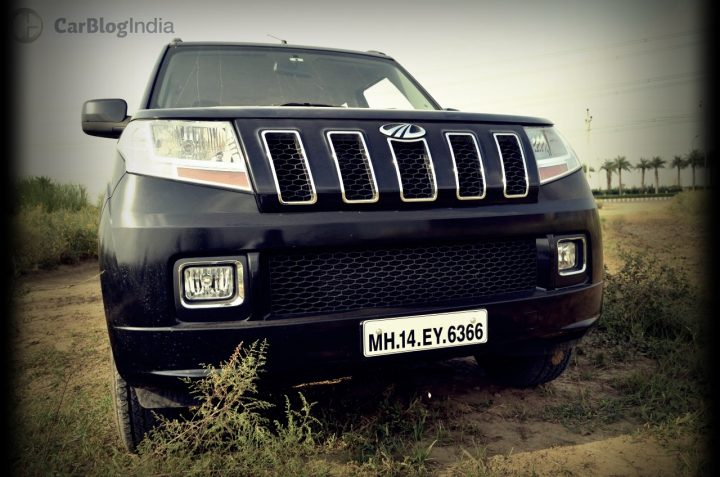 Mahindra is known to come up with very flamboyant designs and the TUV300 is no different. The exteriors are very geometric featuring straight lines which, Mahindra claims, have been inspired by battle tanks. Saying the SUV gets a high set bonnet will be an understatement. It’s a compact SUV only in terms of length as it’s height and width can put SUVs a few segments higher to shame. The front end features a Jeep-like grille with squarish headlamps on either side giving it a very intimidating front fascia. The angular treatment continues towards the lower part of the bumper which gets a huge, rectangular air dam and rectangular fog lamps as well. 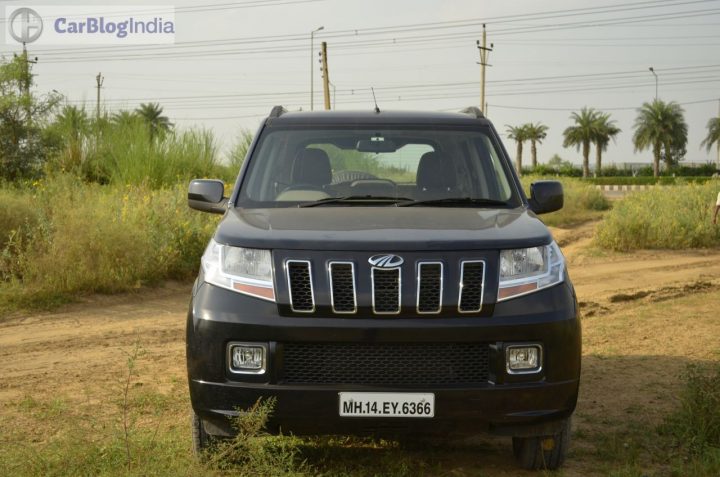 The TUV300’s boxy design is most noticeable in its side profile. You will be hard pressed to find any curved design elements here. Even the wheel arches are more angular than usual. The bulkiness of the side profile manages to dwarf the tires which seem a bit too small for a vehicle this size. Another noticeable feature here is the short overhang, both at the front and the rear. This helps increase approach and departure angles and also helps maximise interior space. Blacked out B-Pillars, roof rails and side steps are a few neat touches, the latter adding a touch of functionality as the TUV’s cabin requires some effort climbing into.

Move on to the back and you will notice a simple, yet elegant tail. The straightforward design might not be the most attention-grabbing bit of the TUV300’s exteriors, but the rectangular tail lamp setup, upright tail gate and the rear mounted spare wheel help give this baby SUV a very mature look. The rear quarter window and the windshield get the wraparound treatment and it does bear a strong resemblance to the Quanto’s rear. 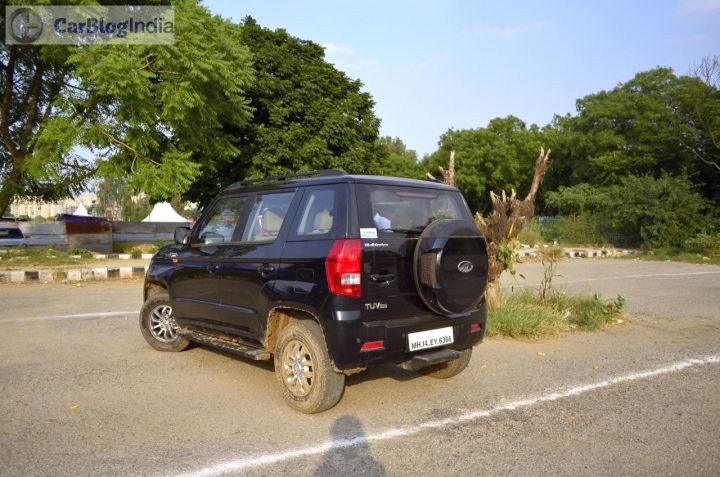 The TUV300 might appear to have been designed using a scale and a pencil and even though its looks are sure to divide opinion, this compact SUV has immense road presence turning heads everywhere we went.

Step inside, or rather, climb aboard and you will be greeted by a very roomy cabin which offers immense space, a lot more than what you would expect from a compact SUV. You sit very high up towering above most other cars offering a very good view of the road ahead. Mahindra has gone with a black-light brown colour scheme for the TUV300’s cabin and used it to good effect in order to give it a pleasant and airy feel. However, we wish the designers had used a bit more black and bit less brown. What impressed us most about the TUV300’s dashboard was the neat layout and the quality of materials used. 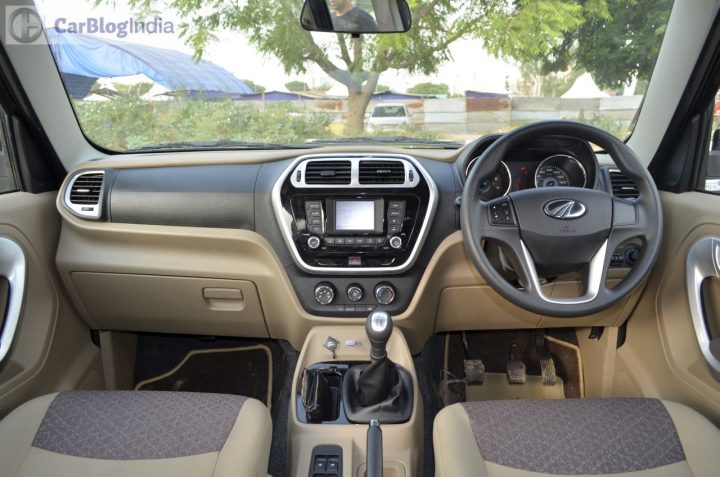 An integrated stereo finished in piano black with silver accents adorns the centre console and gets all the usual features such as USB and AUX support, Bluetooth telephony and more. Our only grouse with this unit was the button quality which do not feel very good to press. Mahindra has played it safe with the design of the instrument cluster which gives out all the necessary info via smartly lit dials and an integrated multi-information display. We really like the chunky steering wheel which is very good to hold and looks good too. There a plenty of cubby holes and storage spaces all around and also a whole bunch of cabin lights as Mahindra has ensured the buyer gets everything he/she could possibly need. Speaking of lights, the front headlamps also get cornering lights which do a very good job of illuminating dark corners while taking turns.

Sitting in the rear seat you will realise the advantages of having a wide, boxy cabin as the second row of seats can easily seat three abreast while offering decent leg and headroom. All around visibility is impressive and the occupants will get the feeling of sitting in a bigger car than the TUV300 actually is. Mahindra has also managed to squeeze out enough room behind the second row for a couple of jump seats which are pretty usable and the rear quarter glass opens outwards to ensure the rear does not get suffocating. Perhaps one of the most impressive aspect of the TUV300’s cabin is the NVH level which has been very well contained and the diesel clatter from the 1.5-litre motor is barely audible. 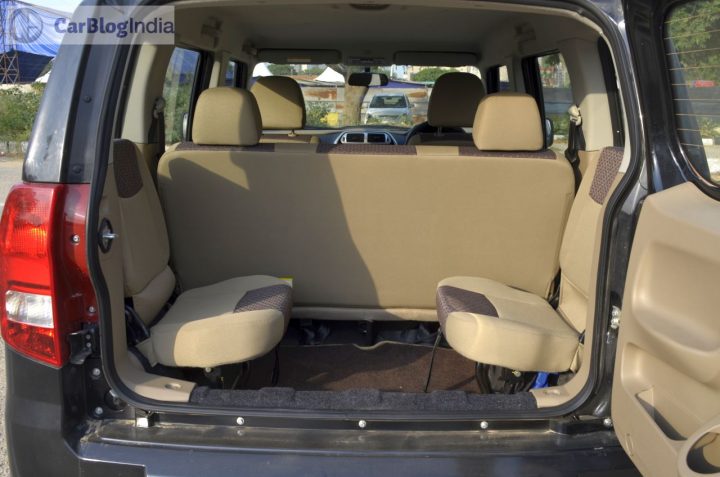 A neat, good quality cabin offering immense space and practicality is the USP of the Mahindra TUV300’s interior.

Under the hood, you will find a 1.5 litre mHawk80 turbocharged diesel engine that is good for 84 bhp of maximum power and a peak torque of 230 Nm. This unit is a heavily reworked version of the one powering the Quanto and features dual-stage turbocharger and a dual-mass flywheel. While 84 bhp might seem too less for a car this size, the 230 Nm of torque on offer does compensate for this deficit to some extent, but it is still not enough for a vehicle that weighs in at almost 1600 kgs. The TUV300’s motor responds well to throttle inputs and once the turbo kicks in at around the 1,500 rpm mark moves forward with ease. Thanks to the short gearing of the 5-speed manual transmission, the TUV300 does not feel sluggish while moving through city traffic, but the slight lack of power comes into play out on the highways. It might take its sweet time in getting there, but this compact SUV will cruise happily at speeds of 110-120 km/h. Adding to the eco-friendly credentials of the SUV are an engine start-stop system and an Eco Mode. The latter dulls throttle response when engaged thereby increasing fuel efficiency and range. 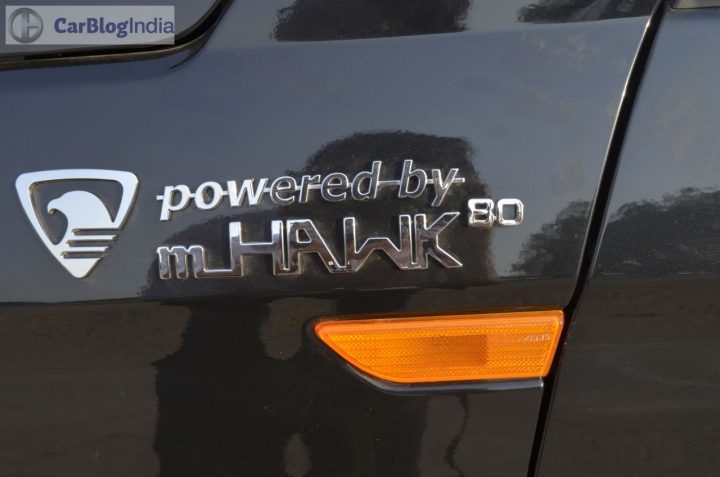 The TUV300 does not give too much to complain about in the city, but out on the highways we wish it was a wee bit more powerful.

The Mahindra TUV300 gets a softly sprung suspension setup which means it soaks in most of the bumps and potholes easily while maintaining occupant comfort. We took it over some really bad patches of road and were immensely impressed by the ride quality. However, a soft suspension setup also means the nose pitches and dives quite a bit and the TUV300 moves about a bit too much at higher speeds. Naturally, thanks to the tall stance, there is clear evidence of body roll and corner carving is best avoided in the TUV. That said, the handling is otherwise impressive with the steering offering decent feedback and the suspension setup offering a comfortable ride. Initial response from the brakes is a wee bit spongy, but it builds up well with the increase in pedal movement and we were pretty satisfied with the TUV300’s stopping ability. 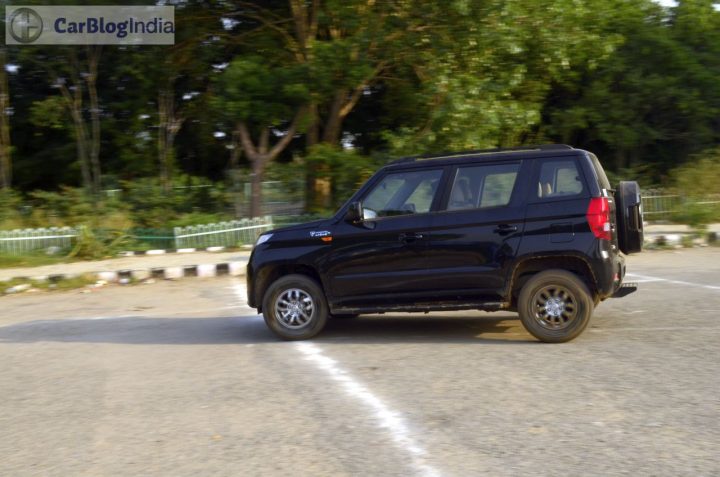 The Mahindra TUV300 isn’t meant for spirited driving, SUVs usually aren’t. What it offers is a very comfortable ride for its occupants handling city roads and highway runs with equal ease.

When the Quanto was launched Mahindra drew a lot of flak for its Xylo-derived disproportionate exterior and an unappealing package. Few years down the line, the company has made amends with the introduction of the TUV300. In terms of features, it is right up there with arch rival Ford EcoSport, and it fares much better in terms of space and practicality. The only real issue here could be the ‘love it or loathe it’ looks which might not be to everyone’s liking, but they do impart the TUV300 with immense road presence. And then there’s the price. At a starting price of INR 6.9 lacs and INR 8.5 lacs for the top-spec trims with the manual option, the Mahindra TUV300 offers immense value for money making it very hard to ignore. Coming back to the initial question – Does it do justice to its claim of being “Tough and Stylish”? You bet. 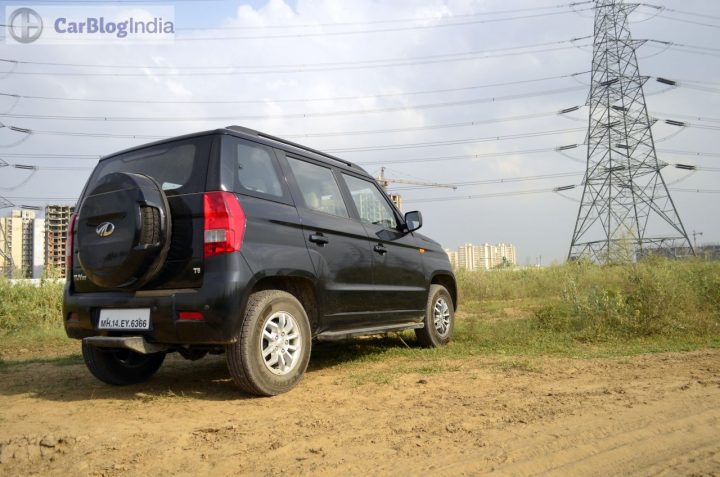 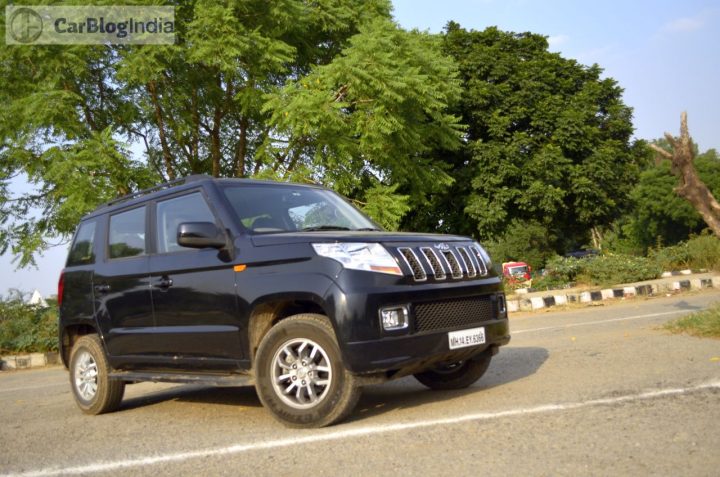 Do let us know what you think of our Mahindra TUV300 Test Drive Review and stay tuned to CarBlogIndia for more such reviews and news.