The Maruti Suzuki Ciaz RS SHVS, which entered our long-term fleet around the end of March, has clocked over 12,000 kms in a little over three months. The Ciaz has played quite a few roles in this rather short span of time. For starters, it has been my daily-driver ever since it got inducted into our long-term fleet. It maybe noted that the Ciaz SHVS has been exempted from the Delhi Govt’s odd-even rule, which means that I was saved from horrors of travelling in the filled-to-the-brim metro coaches during the second phase of this controversial car-rationing scheme. Also, this car’s extremely frugal nature ensues considerable savings on the fuel bills. Finally, the Ciaz RS SHVS has proven to be a decent mile-muncher on those weekend excursions to the nearby tourist spots. Thanks to the RS trim, our long-term Ciaz looks fairly more interesting than the vanilla edition and hence, the significant other and her friends have totally approved of the way this car looks. Oh and lest I forget, this car’s generous boot space enabled me to help a friend relocate! Read on for a lot more that we have to say about this car in our Maruti Suzuki Ciaz SHVS Review with long term report here – 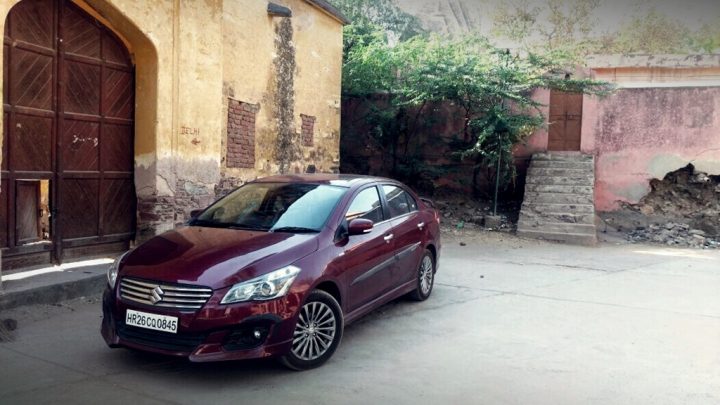 Like I said, the Maruti Ciaz RS SHVS is exempted from the controversial odd-even car-rationing system in New Delhi. Apparently, the rule-makers are of the belief that this car, thanks to its mild hybrid system, bags sufficient ‘green credentials’ to be classified under the same slab as full electric-hybrids! While I would like to refrain from commenting on the efficiency of this car-rationing policy, it is pretty much for sure that this car’s mild hybrid system (SHVS) makes this car only marginally greener than the non SHVS-equipped Diesel variant that was sold earlier. That said, one simply can’t ignore the brilliance with which this rather simple system optimizes the fuel economy. So basically, you burn less fuel and do your bit to save the Capital, simple!

What this system actually does is to generate electric energy during engine and vehicle braking. This energy is then fed back into the electrical system and this improves the engine’s mechanical efficiency by making the alternator do less work. While this system doesn’t have a drastic effect on the fuel consumption, it does enhance the frugality by a small margin. Also helping you save fuel is the start-stop technology. This technology helps reduce the fuel consumption by switching off the engine when the car is idling in Neutral. The engine comes back to life as soon as you depress the clutch to roll off. The Ciaz RS SHVS returned an average fuel mileage of over 18 kmpl during my commutes!

Other than the high fuel economy, the 1.3 DDIS200 continues to impress us with its high refinement levels and decent mid-range performance during our long commutes. The Ciaz RS SHVS ain’t no tarmac scorcher, but there’s enough punch post-1,800 rpm to overtake most of the fast-moving traffic without as much as breaking a sweat. Basically, there’s enough juice for your daily commute and the occasional expressway runs. However, it is during our hill excursions where the lack of outright power got apparent. One needs to keep the engine on boil while tackling inclines. It is here when the turbo lag below 1700 RPM gets apparent. Also, the fuel economy took quite a hit while driving uphill.

One of the most like-able bits about this car is the space on offer. The cabin is really roomy and the rear bench can easily accommodate three adults. There’s a lot of legroom and the Ciaz makes for a great car to be chauffeured around in. However, as we discovered during the short outstation trips, the rear seat slightly lacks under-thigh support. That said, the Ciaz’s cabin still manages to leave us impressed with its spaciousness and comfort-levels. And then, there’s the gargantuan boot, which can probably swallow your entire wardrobe!

One of the biggest reasons for the high passenger comfort is the well-tuned suspension. The ride quality is top notch and this car almost glides over the minor undulations and speed humps. The bigger craters do creep into the cabin but overall, the Ciaz exhibits a well-matured ride quality.

Finally, our long-term test car comes in the top-of-the-line RS trim. The ‘RS’ here stands for ‘Relenltess Spirit’ (!!), which, for obvious reasons, doesn’t have a nice ring to it. What’s nice, however, is the way Maruti has tried to inject a dose of sportiness into an otherwise simple-understated design. You get a subtle body kit and a rather chunky boot-lid spoiler. But our favorite bit is the all-black treatment for the interior panels. The cabin space looks a lot sportier in black-with-grey-inserts theme than it does in the standard black-beige affair. 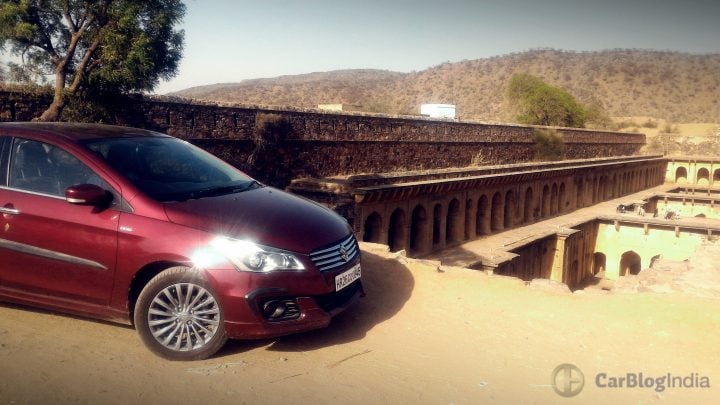 The Ciaz RS SHVS will be spending some more time with us in the coming days. We plan to take it on longer road trips this month.