The Ford Figo needs no introduction. Launched way back in 2010, the last gen Figo is based on the Mark V Fiesta hatchback platform and has been tailor-made to cater to developing markets like that of India. Now, the Figo has brought unprecedented volumes to Ford India in the past and thereby, has played an instrumental role in establishing the Blue-Oval in the highly competitive B-segment of Indian car bazaar. The earlier Figo received a rather discreet facelift in 2012, which did help the compact car to fend off some of the heat from the fresher competition. However, age has certainly caught up with the old Figo and the once-popular model has had an almost dismal sales performance during the last few months. Having already launched the Figo Aspire sedan, which is nothing but a sub-4m version of the new-gen KA+ sedan, the Indian subsidiary of Ford has now launched the all-new Figo (aka KA) in India, all in an attempt to revitalize its sales performance in the ultra competitive B-segment. The new generation Figo looks nothing like the rather conventionally-styled model it replaces and comes packed with some best-in-class features and powerplants. We are just back from experiencing the new Figo in varied driving conditions and you can find out all about this new hatchback in our new Ford Figo test drive review here – 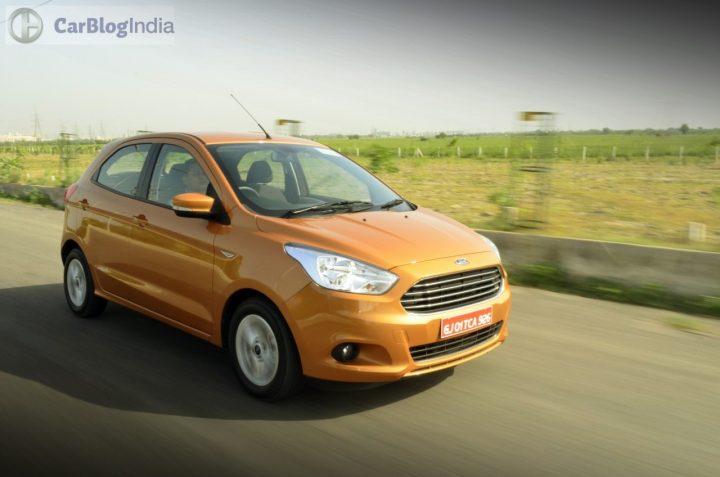 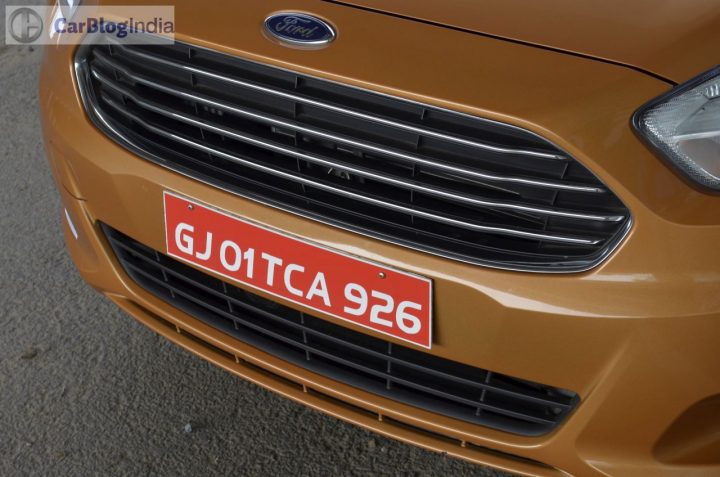 A quick glance at the new Ford Figo and you’ll be really hard pressed to find a fault with this car’s front-end. The new Figo shares its nose with the Figo Aspire, which means that the new car benefits from a really stylish nose that is sure to impress many. No surprise, then, that the front-end of the new Figo is the biggest highlight of this car’s design. The front facade is characterized by a wide front-grille that is somewhat reminiscent of some revered nameplates like the Aston Martin and MINI. The front-end also features very stylish swept-back headlamps that infuse some more sportiness into the front fascia. And then, there’s a clamshell hood that gets a rather discreet ‘power bump’ to make the car look more aggressive. When seen front on, the new model Figo radiates dynamism and looks a lot more appealing than some of its chief rivals (Read: Hyundai Grand i10 and Maruti Swift). Overall, the front facade of the new Figo goes a long way in upping the overall aesthetic appeal.

In its side profile, the new Figo looks a lot like its compact sedan brethren all the way till the C-Pillar. The highlights here are the blacked-out B-Pillar, chunky ORVMs with integrated trafficators and a well-pronounced shoulder-line that runs between the front and the rear fenders. The sharp shoulder-line, along with a neat character line, goes on to prevent the side from looking a bit bland. 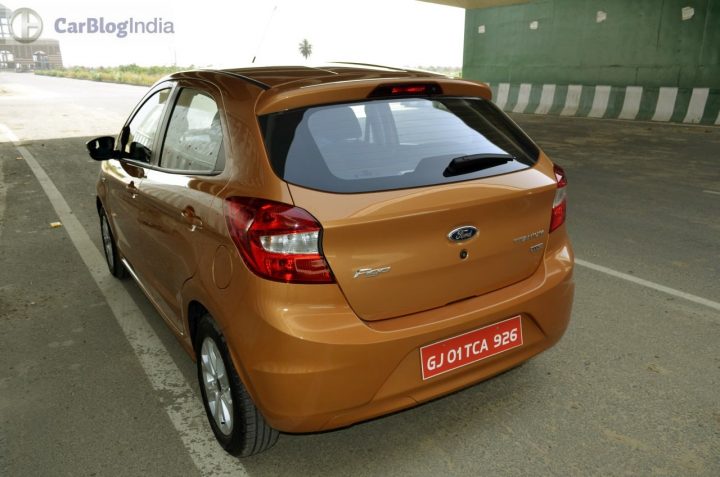 It is at its posterior where the new Figo’s design evokes some mixed feelings. While we love the way those wrap-around tail-lamps hint at the overall sporty character of the design, we can’t help but notice a slight disconnect with the highly aggressive front-end. Overall, the new Ford Figo hatchback leaves us impressed with its new-age design and styling. True, the new Figo doesn’t have the ‘timeless’ appeal of the pre-facelift Punto, but we really can’t think of any other car in this segment that looks as lively as this car here. 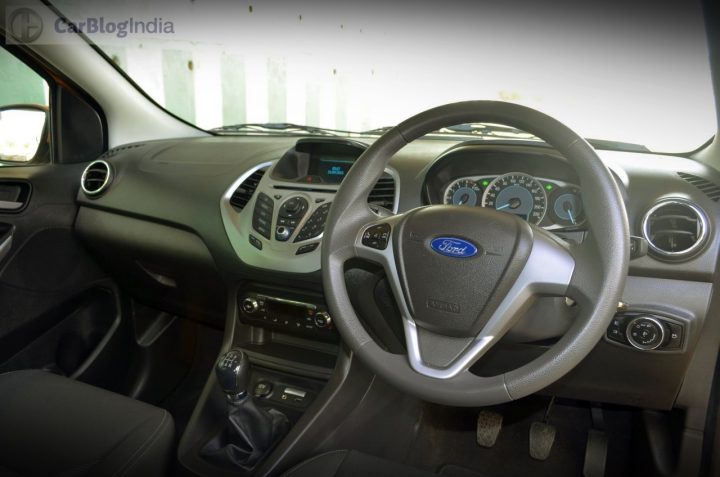 Much like most of the exterior, the interior of the new Figo is largely similar to the Figo Aspire’s cabin. You get the same dashboard and door pads, albeit, in a gray and silver color theme instead of the black and beige shades on the Aspire. The upper section of the dashboard features an EcoSport-like SYNC/Mobile Docking system and manages to look sufficiently modern. You also get some brushed-silver accents on the steering wheel which, together with a blue-backlit speedo console, infuses some sportiness into the cockpit. The new Figo, akin to the Aspire, benefits from longer wheelbase that its immediate rivals and hence, has more cabin space on offer. However, the highly intrusive transmission tunnel at the back would be a reason of discomfort for the middle passenger on the rear seat. The new Figo gets many cubby holes around the cabin but the boot space, at 257-litres, isn’t as generous as the earlier Figo’s. Also, it could have done with some more shoulder space for the rear occupants. 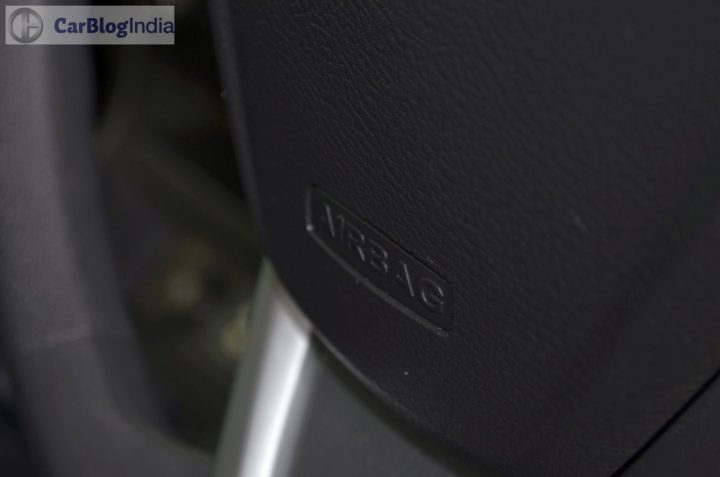 The new Figo comes loaded to its features with some best-in-class comfort and safety features. Highlights of this car’s features list are – 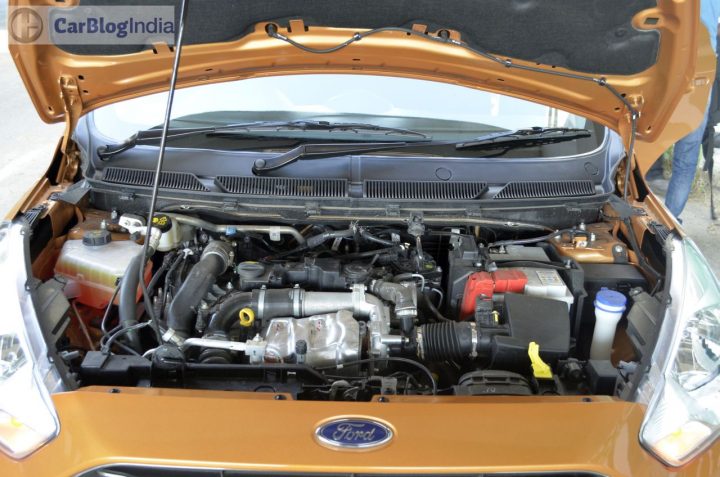 As you would have expected, the parts sharing between the new Figo and the Aspire isn’t just superficial. The Figo, much like its compact sedan sibling, is being offered with a 1.5-litre Petrol Ti-VCT petrol engine that should excite the driving enthusiasts, a 1.5-litre Diesel mill that should appeal to the economy conscious and will bring the biggest chunk of sales, and a 1.2-litre Petrol engine that offers a good mix of performance and fuel economy. 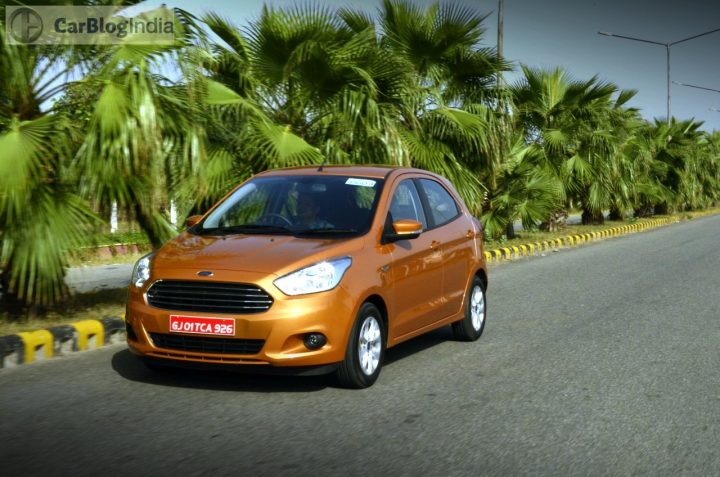 Powering the new Figo Diesel is the same 1.5-litre turbo’ed oil-burner that powers the Fiesta and the EcoSport. However, this new-age diesel motor has been re-tuned for the new generation Figos and now churn out a higher peak power of 100 PS. There’s minimal turbo-lag and the engine truly wakes up at as low as 1400 rpm. Once in the optimal power-band, the Figo charges forward with an almost ferocious velocity and we managed to hit a speedo-indicated top whack of 185 km/h! The Diesel model is pretty athletic even lower down the revs and the Figo D is sufficiently tractable to chug along at speeds as low as 45 km/h in fourth gear! The engine scores highly on refinement and revs pretty freely too, but NVH-levels are slightly on the higher side. Both the 1.2-litre Petrol and the 1.5-litre Diesel engines come mated to a five-speed manual ‘box that offers precise and smooth shifts along with a light clutch action.

The 1.5 TiVCT, on the other hand, comes mated to a six-speed Powershift Dual-Clutch Automatic transmission that is very precise and quick. With more than 110 bhp of max. power, the new Figo is currently the most powerful car in its segment. Thanks to good handling manners and a very potent motor, the new Figo 1.5 TiVCT is quite a hoot to drive and is sure to please the driving enthusiasts. 100 km/h from standstill comes in a litte more than 10 seconds and we managed to hit a speedo-indicated top whack of almost 190 km/h. When driven sanely, this engine variant can be a relaxed cruiser and can easily coast at 100 km/h at just 2,500 ticks. Another highlight of this engine is the rorty exhaust note, which is pure music to ears of every boy racer. In D mode, and with a mild throttle inputs, the excellent Powershift will upshifta at just 2,300 rpm, thereby resulting in an optimum fuel efficiency. Slot the lever into S model and you’ll have the engine rev almost all the way till its 6,500 rpm redline.

We have always loved the way Ford has managed to strike a good balance between a comfortable ride and outright handling prowess. The new Figo, however, isn’t as sharp around the corners as the latest Fiesta and the new car seems to have traded some of its corner-carving talent for a cossetting ride. That said, the steering is still pretty precise and there’s even some amount of feedback on offer. There’s only a little body-roll but nothing that would unnerve you from going apex-hunting. However, the steering is a bit on the lighter side and doesn’t exactly weigh up with speed. The high-speed stability is impressive. 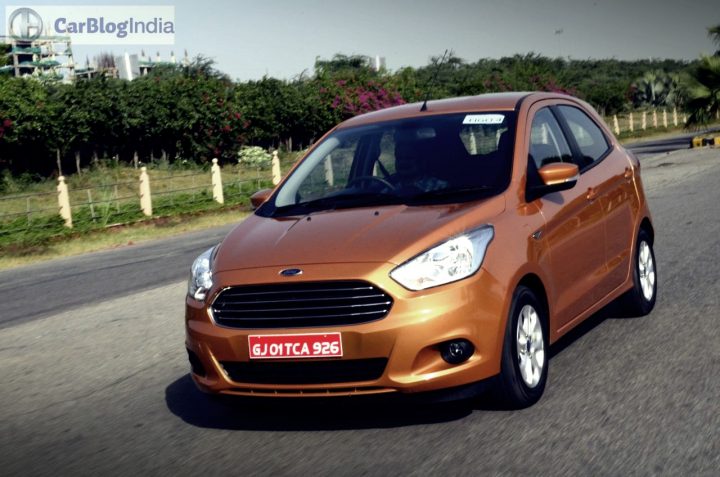 As we just said, the Figo seems to have sacrificed some of its handling capabilities in favour of a comfier ride. We tested the new Figo on the brilliant Yamuna Expressway, which means we couldn’t test the ride on the harshest of the tarmacs. However, as we found while dealing with some mindlessly designed speed-humps and some large potholes, the Figo is quite adept at gliding over most of the undulations and we feel that only the biggest of the craters would threaten to unsettle the composure of this car. The new Figo boasts of ventilated disc brakes at its front wheels and drum units at the rear. Braking is strong and the ABS ensures that the Figo stops in a straight line.

The new Ford Figo seems to have just the right ingredients to pen down another success story for Ford India. With a very tasty exterior design, a long list of features, powerful-yet-efficient engines, and decent ride and handling characteristics, the new Ford Figo has  a lot going for it. True, it is not as sure-footed as the Fiesta and nor is it the most spacious car in its segment, but some minor niggles notwithstanding, the new Figo looks poised to repeat the success story of its predecessor. 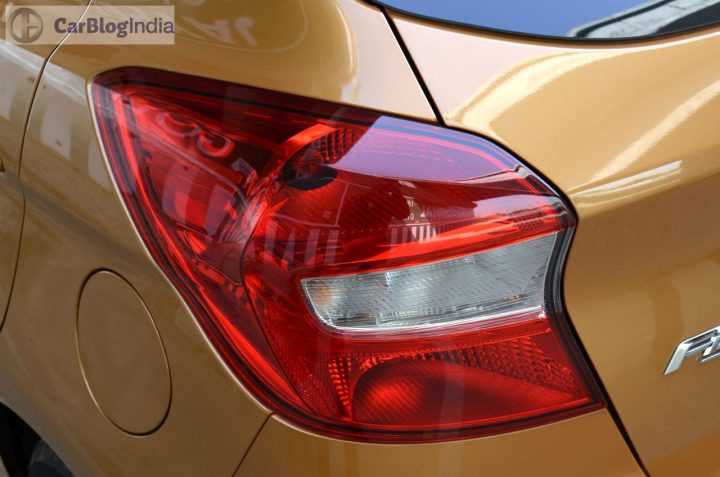 So, what do you have to say about our new Ford Figo test drive review? Do share your thoughts by penning them down in the comments section below. Also, stay tuned to Car Blog India for more stories like the new Ford Figo review that we have here.