The Kwid is an important product for Renault India. The highly popular Duster small-SUV has been facing quite some heat from the recently-launched Hyundai Creta and it’s no secret that the remaining four cars in Renault’s stable have failed rather miserably to excite the new car buying lot. With the Creta further eating into the sales of the Duster, Renault India requires a strong strategy to regain the lost footing. Not to be the one to be bogged down by lackluster performance of the Pulse, its only small car on sale today, the Indian subsidiary of the globally-acclaimed French carmaker looks all set to re-enter the small car market – this time bang in the Maruti Alto 800 territory! The Alto, which has been an undisputed leader of the entry-level car market, sells over 20,000 examples every month and has been an almost lethal opponent to the likes of Hyundai Eon and the Chevrolet Spark. But Renault has realized that beating the Alto 800 at its own game is something that is far from a child’s play and hence, has devised a strategy that sounds just right to have the competition worried, really worried. The Kwid is about to become the first-ever micro-SUV in the country and will be seen kicking open gates to an altogether new sub-segment of the entry-level car bazaar. What this basically means is that the Kwid would carve out a niche for itself in the entry-level market by offering more than the plain Jane Alto 800, without actually commanding much of a premium over the undisputed leader of the small cars. We are just back from a rendezvous with the Kwid in picturesque Goa and you can find out all about the new kid on the block in our Renault Kwid test drive review here 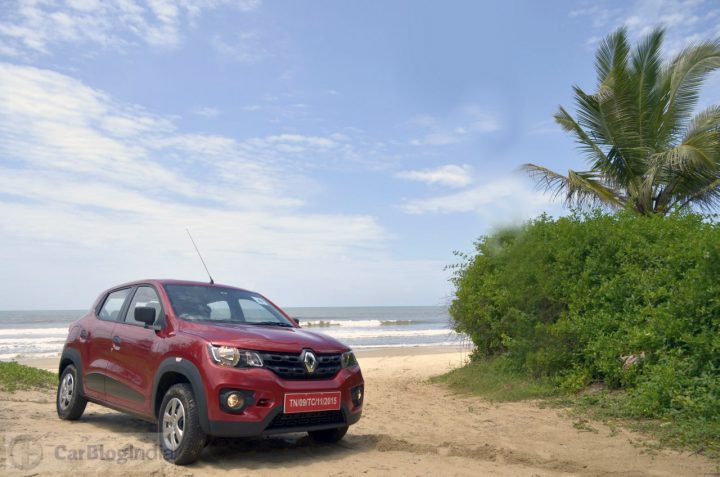 The Kwid looks nothing like anything in its segment! There’s a rugged-looking front-end, which has a rather butch appearance. A high ground clearance, a set of premium-looking headlamps, a wide grille and a chunky bumper with neatly-sculpted foglamp enclosures – the Kwid has enough oomph to attract buyers away from the very conventionally-styled rivals. Even in its side profile, the Kwid has enough to keep you interested. The flared wheel arches infuse some ruggedness with their design and the plastic cladding, along with a vinyl rub-strip, further accentuates the muscular look of the car. Also, there are many other bits, like a discreet shoulder line that terminates at the middle of the C-pillar, wrap-around taillamps and blacked-out B-pillars, which endow the Kwid with some more jazz.

The rear-end is our favorite part of the design. The stylish wrap-around taillamps, a roof-mounted spoiler and a rugged rear bumper come together pretty well to bestow a typical-SUV look to the Kwid’s posterior. However, the Kwid is an entry-level product, which means that all the cost-cutting measures are pretty apparent. For starters, the wheels have just three nuts, which is something that is pretty reminiscent of the even-cheaper Tata Nano. And then, there are some more bits like non-body coloured door handles and manually-adjustable ORVMs, which rob the Kwid of some more ‘feel good’ factor. Overall, however, the Kwid is a stylish product that should benefit from its mini-Duster looks.

On the inside, the Kwid offers a stylish and a sufficiently premium cabin for an entry-level model. The dashboard is attractive and gets circular aircon vents at its terminal ends. The centre-console though gets stylish rectangular aircon vents. The steering wheel looks quite sporty and is good to hold. The talking point of the cabin’s visual appeal however, is a digital speedo console that has bits like a gearshift-indicator to further enhances the sportiness-quotient of the cabin. The plastic quality is slightly better than the competition and the top-end variant even gets a touchscreen infotainment system with Sat-Nav! The entry-level model however, is stripped off even the most basic accessories such as the passenger-side sun visor and auto-on/off cabin light. However, the occupants are sure to appreciate the oodles of space on offer! The Kwid, which comes with best-in-class cabin space, also gets a 300-litre boot and as many as three glove compartments on the top-of-the-line RXT trim! 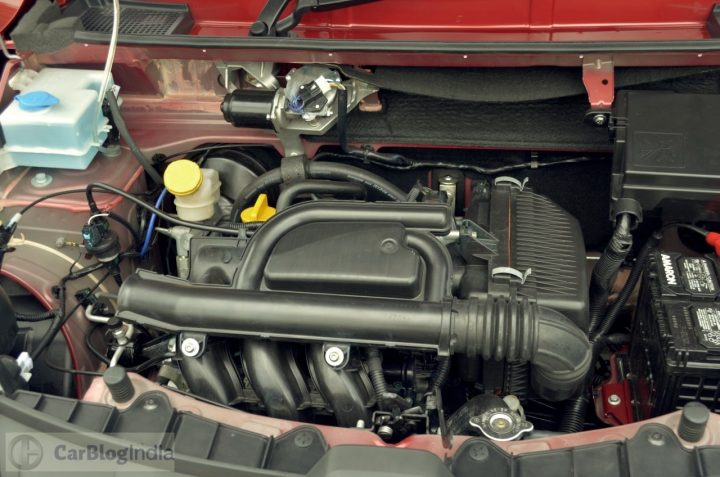 The Kwid is powered by an all-new 799cc inline 3-cylinder petrol engine that boasts of an all-aluminium construction. The engine pumps out a maximum power-torque of 52 bhp-74 Nm and comes mated to a five-speed manual ‘box. The Kwid tips the scales at just 660 kgs, which makes it the lightest car in its segment. The Kwid’s engine, even on being a three-pot motor, is sufficiently refined. There’s a really strong mid-range torque and the Kwid is pretty quick to hit 80 km/h on the speedo. The low-end torque however, could have been slightly better spread as you really need to work the gearbox in city traffic. Also, even on being similar in layout to the Alto’s Suzuki F8 motor, the Kwid’s engine doesn’t feel as peppy and free-revving. But this engine scores where it matters the most! With an ARAI-certified fuel mileage of 25.13 km/l, the Renault Kwid becomes the most fuel-efficient petrol-powered car in the country and this alone should go a long way in pulling many new car buyers away from the less frugal competition. Low NVH levels, high refinement, high fuel economy and a high power-torque output – the Kwid’s 799cc motor has a lot going for it. 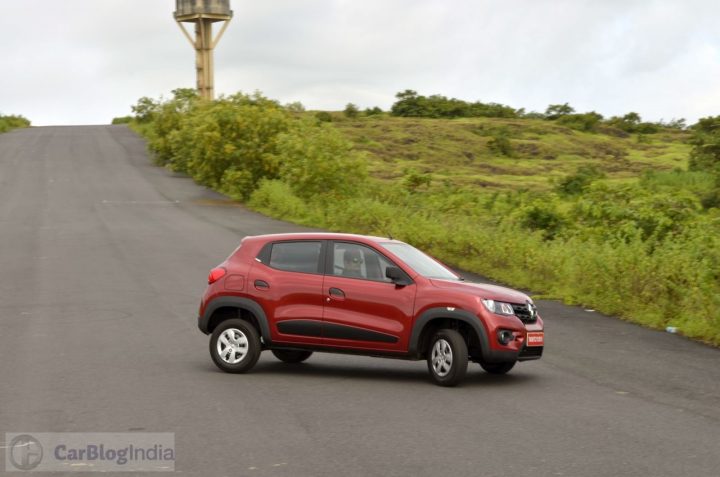 Another area where the Kwid scores well over its rivals is the ride quality. The Kwid’s suspension absorbs most of the small irregularities that our roads are famous for with quite an ease and only the bigger of the potholes threaten to unsettle this car. Even the rear passengers will appreciate the Kwid’s sufficiently soft suspension and aren’t likely to ever complain of a harsh ride that mars some of the other cars in this segment. The stability too is pretty good when you compare it with the rivals, much of which has to do with the longest wheelbase in the class. The Kwid, much like most other cars in the small car market, comes with an electronic power steering that doesn’t offer much in terms of feedback. However, the steering is sufficiently direct and doesn’t feel vague around its dead-centre, which is something that we’ve come to experience on the Alto.

While the ride and handling department leaves little room for complain, the brakes could have been slightly more enthusiastic. Don’t get us wrong though, for they are sufficient to haul down the Kwid from high speeds, but it is their slightly spongy nature that we aren’t too fond of. Also, ABS is conspicuous by its absence even on the top-of-the-line trim.

The Kwid has a lot to offer. For starters, the SUV-ish looks help it stand out from the crowd of conventionally-designed sub-compact hatchbacks. Apart from the really high aesthetic appeal, there’s also a spacious cabin and a good ride quality, which are traits that are seldom heard of in this segment. On top of everything, there’s Renault’s promise of a good after-sales experience and a wider service network. True, the engine could have been slightly more eager and we would have appreciated more features, but for a price of less than INR 4 lakhs for the top-end variant, the Kwid is a lot of car for the money. Don’t be even slightly surprised to see this car becoming the next big small car in the country. 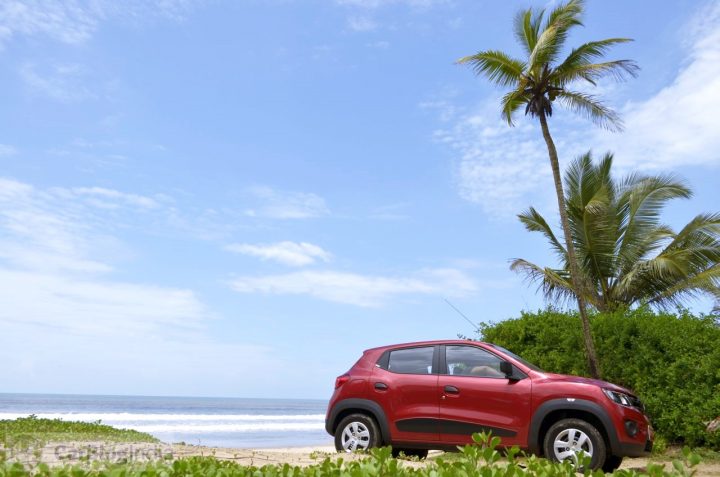 So, what do you think of our Renault Kwid test drive review? Do share your thoughts by penning them down in the comments section below and stay tuned for more on the new Renault Kwid.