French automobile major Renault unveiled their highly anticipated new small car, the KWID, at an event in Chennai a few months back and ever since then it has been getting a lot of attention. One look and it is not hard to see why it has got the whole town talking. The crossover like exterior is unlike anything we have seen in a car belonging to this segment, which could work out very well in the KWID’s favour once Renault launches the all-new model today. Renault is targeting a price range of INR 3-4 lakhs and class-leading fuel efficiency, which you can read about in our detailed report here. In this Renault Kwid design review, we will analyse the design of the Renault KWID and tell you how the small hatchback is roughly a mash-up of multiple Renault crossovers.

As we mentioned earlier, the Renault KWID has the exterior of a crossover with design cues from the Duster and the Captur. There are several design features that are characteristic of crossovers and SUVs all around the vehicle. The most prominent of these features being the high set bonnet and steeply raked windshield. The headlight area has hints of the Duster in it and the large grille is similar in shape to that of the Renault Captur or the Kadjar. Adding to the muscular design are large, beefy wheel arches which are again, very Duster-ish. Keeping the crossover look in mind there are generous doses of black cladding all around on the bumpers and wheel arches. The front wheel arches also house the side indicators. Neat touch. The side padding on the doors is another characteristic Renault feature seen on the Captur as well as the Kadjar compact SUVs. It also closely resembles the cladding on the Hyundai Grand i10. 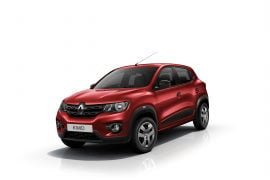 The rising window line and the rear end are almost identical to the Renault Captur, which isn’t necessarily a bad thing as it ensures the KWID is just as attractive from behind as it is from the front. The wheels have been placed at the edge of the body enhancing the KWID’s SUV-like appearance. The overall appearance of the small hatchback by Renault works very well and should attract potential buyers. However, it is not as big as it looks in pictures and the tiny, skinny tires do ruin the look a bit. 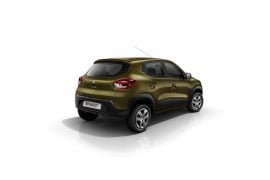 The interiors are very simple and neatly laid out, but there are enough details to make it stand out from the crowd. The model showcased to the public is most likely the top-fo-the line trim since it comes with a touchscreen Media NAV system. Like the exterior, the interior is also inspired by the Renault Captur with the centre console closely resembling that of the Captur. 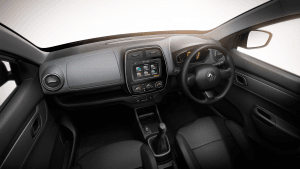 Another highlight on the inside is the instrument cluster which gets a centrally located digital speedo flanked by other warning lights and the fuel gauge. The colour scheme has been kept simple; an all-black interior with a piano finish for the centre console. Since the Renault KWID is dimensionally bigger than the Maruti Alto 800, one of its major competitors, it will have more interior space and increased legroom and headroom. Overall a pleasing place to be in keeping in mind this car belongs to the entry-level hatchback segment. 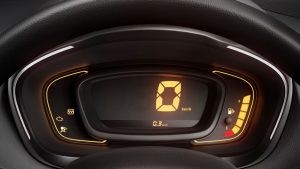 French carmaker Renault seems to have done a very good job with the KWID and clearly has a potential winner on its hands. But the competition is formidable with the likes of the Maruti Alto 800 and the Hyundai Eon dominating the segment. How the car performs in the market is a question that will only be answered once the official launch takes place in the second half of this year and till then all we can only hope the Renault KWID is actually as good as the first impressions suggest.