Suzuki has been trying to get a strong footing in the Indian two wheeler market for a while but that has not been the case. The company’s commuter segment bike Hayate has been doing decent numbers but nothing great to challenge the likes of Splendour, Dream Yuga or Discover. Suzuki is looking to up the ante in the quarter litre performance segment in the country and will soon be seen entering the segment with their bike Suzuki GW250.

The bike has been caught on camera in India and movie actor Salman Khan has been clicked riding the bike. It is not known whether the bike was being used for an advertisement or a movie but whatever the case may be, all it suggests is that the bike’s launch in the country is just around the corner. A point worth mentioning is that the Suzuki Hayate was launched after the actor was seen riding the bike in a movie. 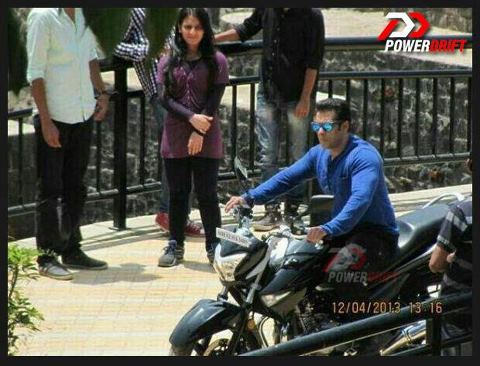 Suzuki India has not revealed any plans of launching the bike in the country but the picture suggests that the launch is near. Suzuki has its presence in the higher displacement biking segment in India but the entry level sportbiking segment is something the company has not ventured into. The bike is also known Inazuma and is propelled by a 248cc twin cylinder engine which delivers a maximum power of 26BHP and a peak torque of 24.2NM.

The engine is mated to a 6 speed manual transmission and weighs 182kgs which might just hamper the performance. The bike will be a naked streetfighter and will be aiming for the sales of the Honda CBR250R and the KTM Duke 200. The bike will also have to battle it out against the Mahindra Mojo 300 which willl be launched later this year. The bike looks quite good and has that butch look most of the naked bikes out there miss out on and Suzuki might get a lot of sales in the entry level performance segment as well.