Exclusive– What Is This “On Test” Prius Doing On Bangalore Roads?

One of our correspondent Rajeev recently spotted an On-Test Toyota Prius Hybrid car on Bangalore roads in India. Although it may look like the newly launched Toyota Prius 2012 which was launched in Auto Expo 2012 in New Delhi,. but there are some elements which are quite different. Also, there was a temporary license plate as well as on-test sticker on the Prius which was spotted on Bangalore roads.

Some of the newer elements on Prius were LED tail lamp cluster, new alloy wheels, slightly modified rear bumper. Apart from this there were not much clues on the exteriors on the test mule of the Toyota Prius. This test mule may also be a part of some international new model which is undergoing weather testing in India. Toyota may also be testing modified drivetrains on the popular Hybrid Prius on Indian roads in congested traffic road conditions in India. 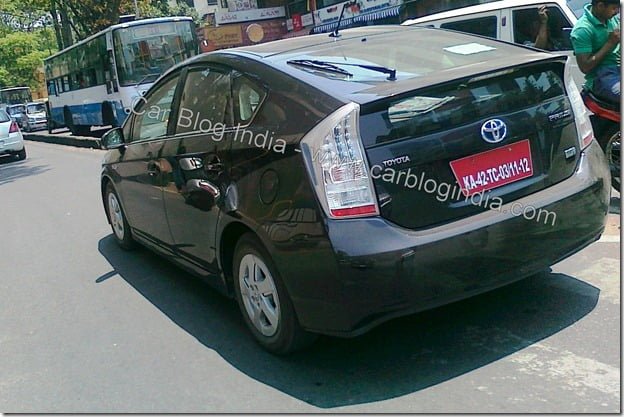 Indian roads are quite tough on cars in terms of road conditions, start stop traffic, tight maneuvering, dusty environments etc., so Toyota maybe testing its new technologies in not so friendly environment on Indian roads.

Interestingly enough Toyota India has recently (in January 2012) launched the Toyota Prius 2012 in India with solar roof ventilation panels with moon roof technology, the Remote Air Conditioning System which enables to operate the air conditioning system by remote control before entering the car, lowering the temperature inside the cabin. But the ongoing Indian model of Toyota Prius is slightly less loaded and has different feature set compared to the Prius which is sold in India. 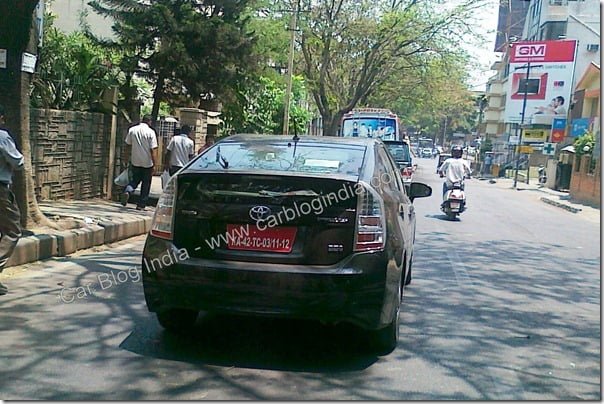 Some of the features of the International model includes rear tail lamps are now clear with L.E.D’s in them making it stand out of the crowd. Overall the new Toyota Prius Plug in Hybrid 2012 is a whole new package with even more attractive looks in the offering. Also the inside there are a quite a few changes, from the revised center console and the push start button color changed to blue hue, the multi-information display has been improved with a 16 gradation vacuum fluorescent display (VFD) which is claimed to provide better three dimensional images. The interior color scheme has been changed to black with the addition of silver inserts. The car also gets new additional features such as the rear view camera, pop up A.C display, phone book access, multiple speaker audio system and advanced Voice Recognition and text to speech functions. Under the hood the engine has been untouched and meets the emission norms and provides good gas mileage, even though the car weighs 50 kilograms more than its processor. 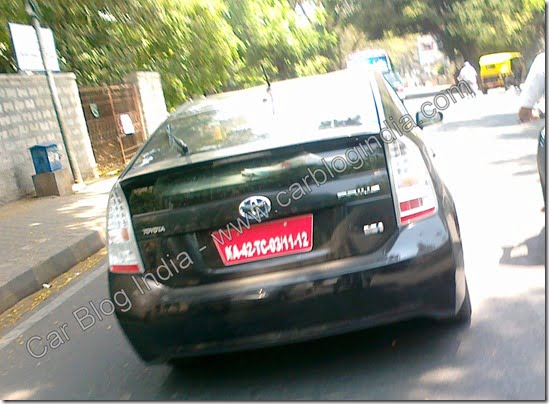 It may be a possibility that Toyota is testing a new variant of the the Prius with more features for Indian buyers, but it also seems to be a bleak possibility as the Prius does not sell in considerable numbers in India. We hope the mysteries will resolve soon. We will update more information here as soon as we get some official information on the same. Do stay tune to us by signing up for our free email newsletter and like our official Facebook Page for latest updates. Check out more – Toyota India News here.