Yamaha R15 V3 ABS is going to launch in the first quarter of 2019, for sure. It will demand a light margin over the current price of Rs 1.25 Lakhs. We expect it to come with a single-channel ABS setup.

When we tested the Yamaha R15 V3, there was literally only one thing missing. Anti-Braking Safety. The double disc brakes were strong but could easily skid the bike at high speeds.

As per the government’s upcoming safety regulations, every two-wheeler above 125cc should be equipped with ABS. To adhere to the regulations, Yamaha might upgrade its entry-level performer with the safety measure in Q1 2019. 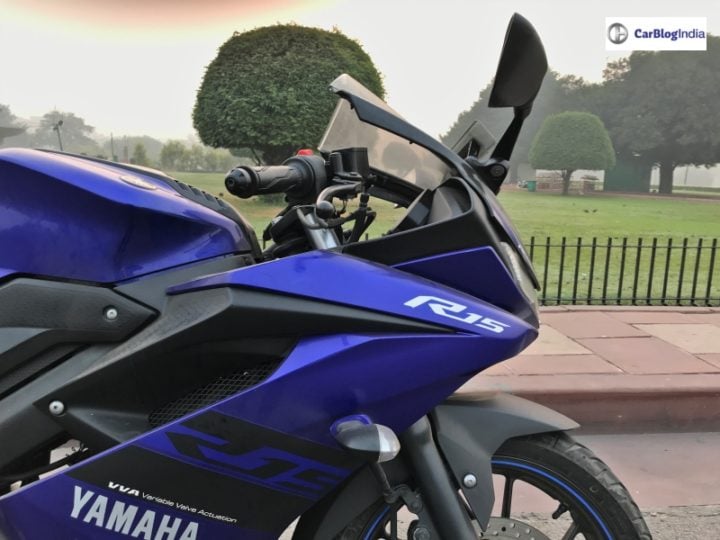 As per media reports, various sightings of the Yamaha R15 V3 ABS have occurred. It is one of the cheapest sports bikes and is easily a track-friendly bike too. Well, Yamaha ‘R’ series are all sporty bikes, starting right from R125 to R1. Well, Yamaha R1 is one of the fastest bikes in the world.

Once the Yamaha R15 V3 ABS comes in, the bike becomes an all-rounder. It will mechanically continue with the same 155cc fuel injection engine. The engine produces 19.31 HP power and 14.7 Nm torque. The engine comes mated to a 6-speed manual transmission.

For braking, the R15 uses front and rear disc brakes. In the front, it uses telescopic forks suspension and in the rear, it uses Link monoshock unit. Although, there are speculations suggesting that sometime later it might get Inverted forks in the front.

Recently, the Moto GP edition of R15 was launched in India. It just received some minor cosmetic changes. The changes include new livery, a new ‘Racing Blue Paint’ and some logo decals over the body. The looks come from the original Moto GP Yamaha bikes.