The previous Honda Jazz was launched in India at a time when our market had not matured enough and hence, car buyers had not warmed up to the idea of a large family hatchback. A hatchback costing sedan money did not go down too well with prospective buyers and add to that the lack of a diesel engine option turned the Honda Jazz into a market dud. The car was very good, but it was a bit ahead of its time. However, things have changed now. Cars like the Hyundai i20 and the Volkswagen Polo have shown the way forward and now Honda, having done their homework thoroughly, is back with the all-new Jazz. Armed with a diesel motor and a competitive price tag, the new Jazz has the Hyundai Elite i20 firmly in its sights. We spent a few days with the Honda Jazz diesel and we will shed some light on the car in our detailed 2015 Honda Jazz Test Drive Review here. 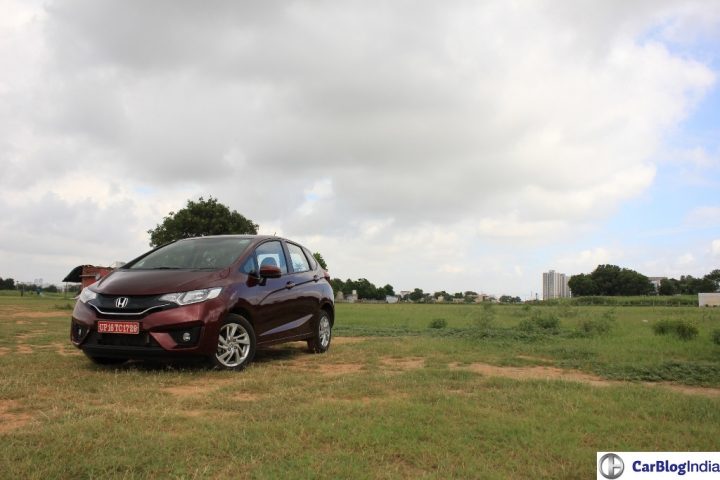 Before we get talking about how it feels to behind the wheel of this car, we will take you around the exteriors of the car. The Jazz retains the same MPV-like profile of the earlier version. However, the new one looks a tad bit more aggressive and edgier than before. There’s a hint of Honda City up front with the horizontal headlamps flanking the thick slab-like grille that houses the Honda insignia. Thankfully, it has been finished in black instead of chrome with only a single tastefully positioned chrome strip. The short, stubby bonnet makes maneuvering through bumper to bumper traffic easy, but also gives it an MPV-like silhouette. 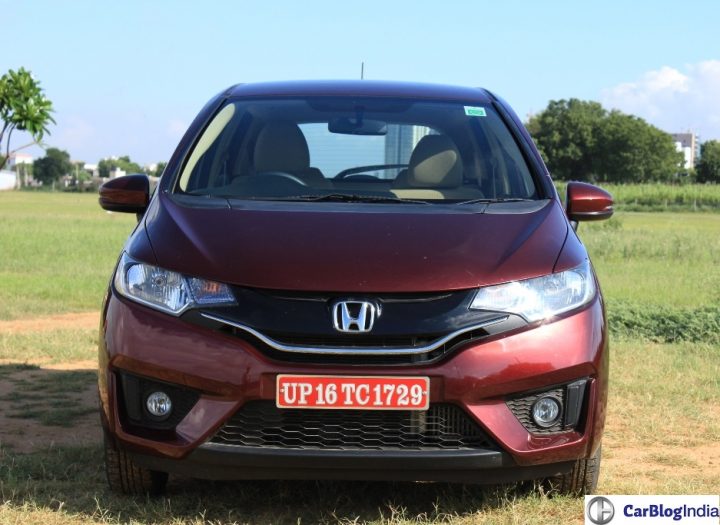 The car is unmistakably a Jazz when viewed from the side. The most noticeable design element is the strong character line which starts just after the front wheel arches and merges neatly into the tail lamps. It helps break the monotony and reduce some of the bulkiness from the rear quarter of the Jazz. Although the alloy wheel design looks good, we would have preferred the slightly darker gray the previous Jazz’s alloys were finished in. 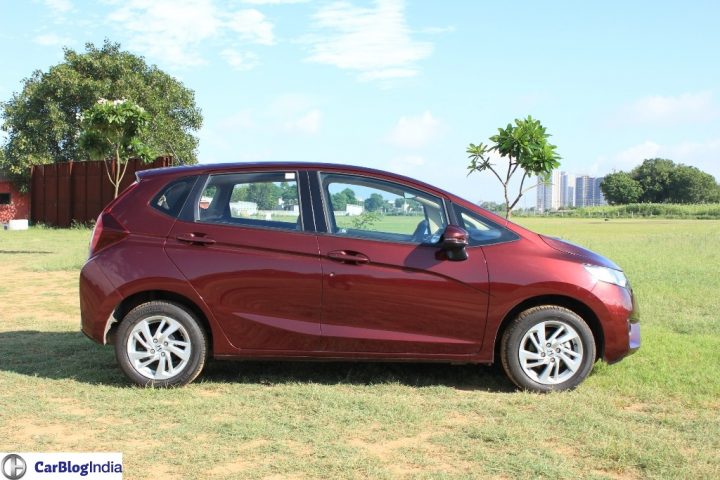 Move on to the back and you will notice that this part of the car bears more resemblance to the previous model than the front. The tall tail lamps seem to have taken inspiration from the Volvos. The thick chrome bar sitting below the rear windscreen is a little too loud, but we don’t expect that to bother the Indian car buyers at all. The rear boot lip extends way down to give easy access to the luggage space. Nice touch there, I reckon. The Jazz does look a bit chubby from behind and the comparatively skinny tires don’t help things either. Honda has tried hard to hide the bulkiness with the strong character line and the black cut outs in the rear bumper, but it still looks rear heavy and looks best when viewed from the front at an angle. 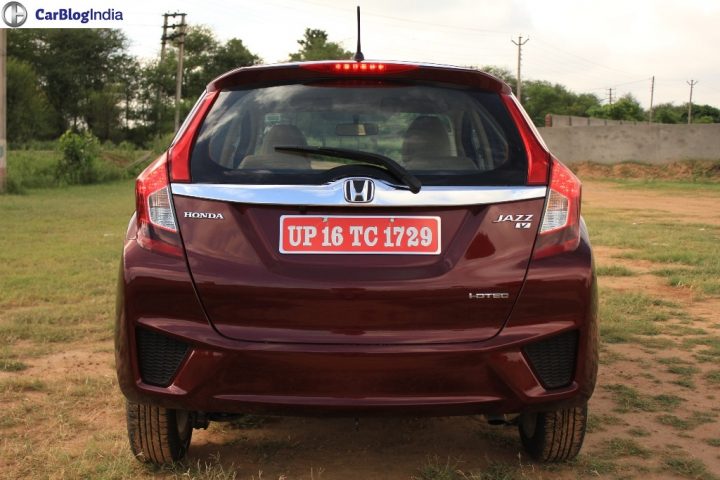 Overall, the Honda Jazz does look appealing from most angles. While the MPV-like profile and bulky rear might not be to everyone’s taste, the design of the new Jazz has enough oomph to pull buyers to Honda showrooms. 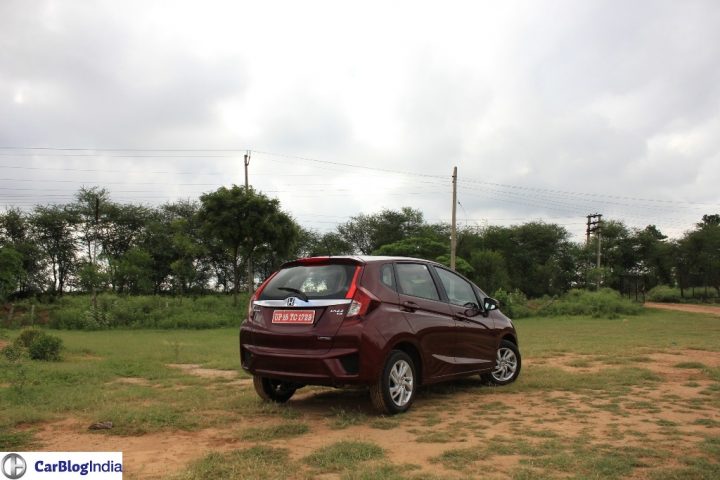 Step inside and you will be greeted by a dashboard that bears a very close resemblance to the Honda City’s. The steering wheel, air conditioning vents and centre console have been lifted straight off the City. The overall layout is cluttered, but functional and buyers would appreciate the futuristic touch-sensitive climate control. Speaking of which, operating the climate control while driving isn’t very convenient and the ‘touch controls’ tend to get pressed accidentally while operating the audio system. The ‘V’ spec trim of the Jazz gets a leather wrapped steering which is nice to hold and then, there’s also a leather wrapped gear knob which falls easily into the hands of the driver. 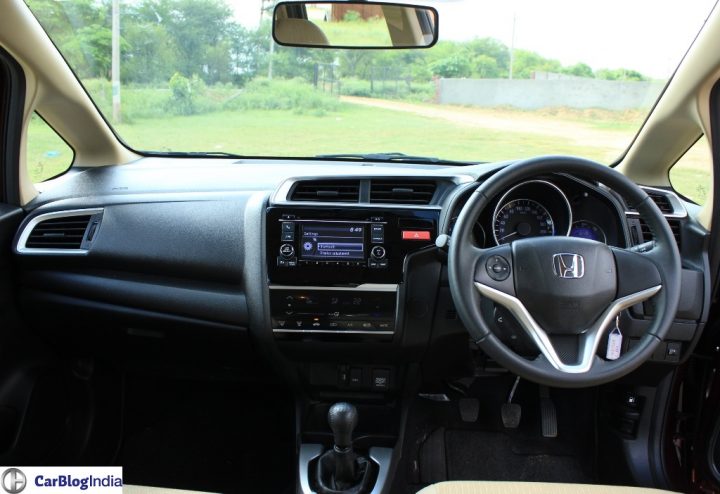 One of the biggest selling points of the Honda Jazz is the interior space which it has in abundance. It is easily the most spacious in its class and even with the front seats pushed all the way back, there is ample leg and knee room. The MPV-like profile means headroom is not an issue even for tall passengers and seating three abreast on the rear bench will not make things uncomfortable. The front seats and nice and comfortable, but the rear bench lacks thigh support. At 357 litres the boot space is very impressive, especially when compared to its the arch rival, the Hyundai Elite i20 which gets only 285 litres. Also, the Jazz gets enough underseat space to stow in small luggage below the rear seats. The Jazz gets marked down in terms of interior quality and fit and finish and is not up to the high standards set by the i20 or the Polo.

We drove the diesel version of the Honda Jazz, which is powered by a 1.5 litre i-DTEC diesel which puts out 100 PS of max. power and 200 Nm of peak torque. This is the same unit which powers the City, Mobilio and Amaze, which means it suffers from the issue of high NVH levels. This Honda diesel unit is the exact opposite of their petrol motors – loud and gruff. However, the engine noise is much better controlled in the Jazz as compared to the rest of the recipients of this 1.5 litre diesel unit. Driving in the city the engine feels pretty effortless, but that is only after 1,500 rpm once the turbo kicks in. Overtaking is easy and normal driving does not require frequent gear changes. 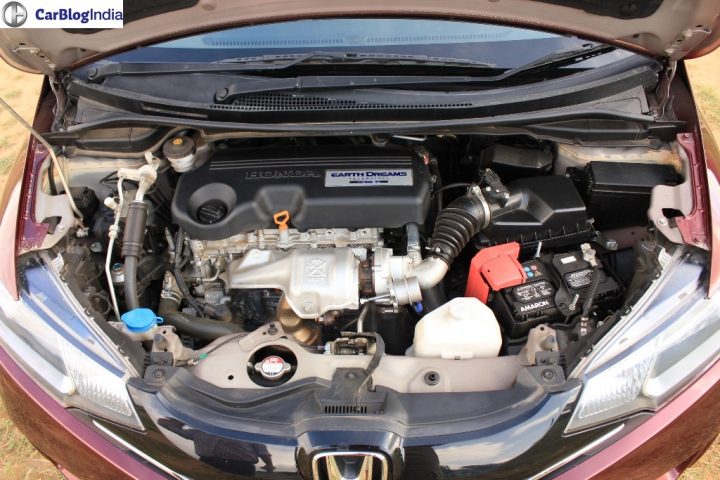 It is not very quick off the line, because of the turbo lag obviously, but the engine has enough punch post the 1,500 rpm mark. The engine is mated to a 6-speed manual transmission and the extra gear increases highway drivability and improves efficiency too, but the gears don’t fall into place during quick shifts ,which makes it a tad bit difficult to drive the Jazz hard. The hatchback cruises easily at speeds of 100-120 km/h. However, push it to the 140 mark and it starts to feel a bit stressed. Which isn’t that much of a problem considering those will be very rare occasions and for the most part, the Jazz is a good car to drive with ample power. Honda claims a fuel efficiency of around 27 kilometers to the litre, which we couldn’t really manage, but in city conditions with the aircon turned on in start stop traffic, a bit of spirited driving and some stints on the highway, the Jazz managed to return a respectable 20-21 kpl. 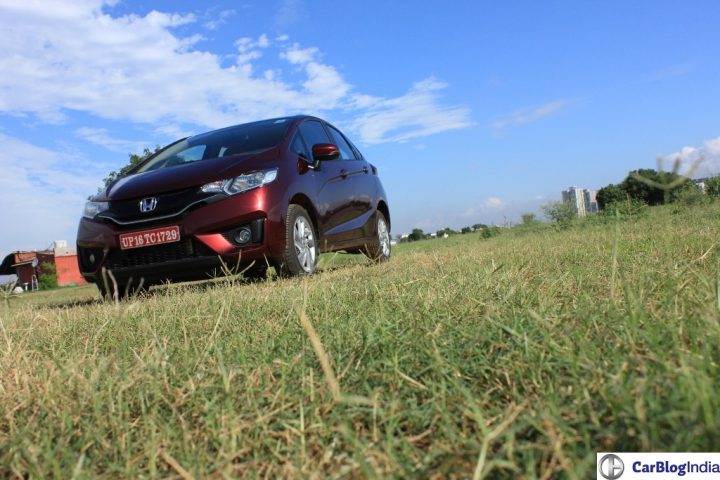 Honda has tuned the Jazz’s suspension for city conditions and hence, it is no surprise that the suspension has been setup slightly to the softer side. Having said that, even at high speeds the stability is pretty good and feedback from the steering is decent as well. The Jazz is in its elements when being driven in urban environment, where the light, easy to manoeuvre steering and tight turning radius comes across as boons. The cabin offers good comfort and the suspension soaks in most bumps very well. However, low-speed ride isn’t the best and look elsewhere for the proverbial magic carpet ride. The stubby nose makes moving through traffic a bit easy and although it is a pretty wide car, it is still a very easy car to drive thru the congested streets. The tires that Honda has shod the Jazz with are a bit too skinny, which limits the grip offered by them. They help in reducing fuel consumption though, but the ride and handling takes a hit. As we mentioned earlier, the Jazz doesn’t get unsettled very easily and same is the case under heavy braking. The car doesn’t waver all that much and the ABS does a fine job of bringing the car to a standstill in a straightline.

The new Honda Jazz has a lot going for it. For starters, it is the most spacious hatchback in its segment and comes loaded with features. Looks are a matter of personal taste, but we don’t see any major reason to dislike the design. Sure, it’s not the most appealing with its MPV-like silhouette, but that is exactly what sets it apart. Priced between INR 5.31 lacs and INR 8.59 lacs (ex-showroom, New Delhi), it is a tad bit more expensive than the Hyundai Elite i20, but keep in mind that the Jazz offers more space, more power and more fuel efficiency too. The Honda Jazz is one of the most practical vehicles on sale today and gets most of the things just right. However, therein lies its weakness. It feels a bit soulless, a bit emotionless. The head would definitely go for the Honda Jazz, but the heart? Maybe not. That said, over the time, the Jazz is sure to prove to be an easy vehicle to live with. Rest assured, you certainly can’t go wrong with putting your money down on this spacious hatchback. 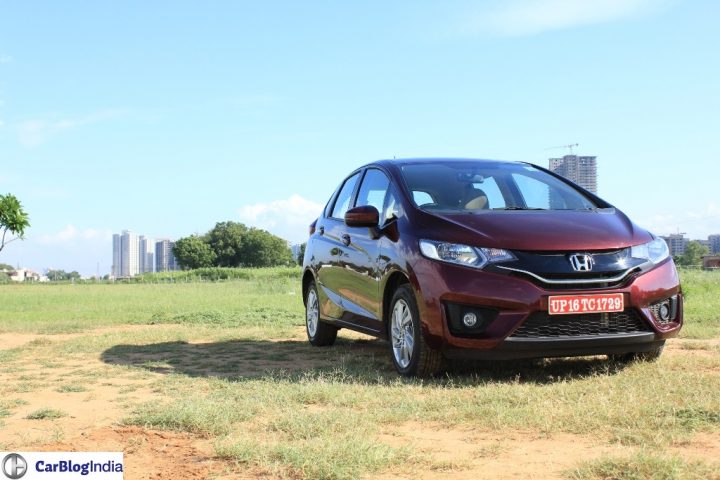 So what do you think of the latest hatchback from Honda and please feel free to express your views on the 2015 Honda Jazz Test Drive Review. Stay tuned to CarBlogIndia for more reviews and news from the automotive world.