The first comprehensive facelift Honda has given the Amaze compact sedan since its launch back in 2013. The Amaze has always been a significant model for Honda India. It introduced the manufacturer’s first diesel engine in India – the 1.5 L i-DTEC –  which later went on to power the Mobilio and the highly successful Honda City. With the launch of the 2016 model, Honda seems to have addressed all the major shortcomings of the original car and has ensured the Amaze is now better equipped to take on its competitors in what is increasingly becoming the most hotly contested segment in our market. What Honda has done is given the Amaze a new face, completely redesigned the interiors and thrown a bit more kit in order to make it a more ‘dzire’able proposition. Read our New 2016 Honda Amaze Test Drive Review to find out if they have succeeded. 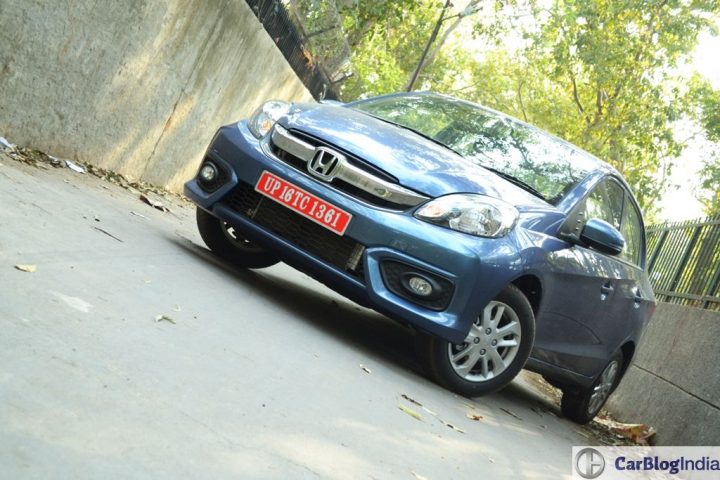 Well, Quite a lot actually. There’s  new Mobilio inspired nose up front with a new grille and bumper. The new bumper is black inserts housing the fog lamps and makes the Amaze look wider and more mature than before. A single bar of chrome stretching from one headlamp to the other has replaced the twin-slat chrome grille. Reprofiled tail lamps and ORVMs with turn indicators round up the changes made to the exteriors. The Amaze has always been a good looking car, especially by compact sedan standards and the facelift only goes on to enhance its looks.

Step inside the 2016 Honda Amaze and you will be greeted by an all-new cabin. The pre-facelift model, in fact the entire range of vehicles based on the Brio, have been criticised heavily for the low-rent, quirky interiors. The new Amaze’s dashboard has been completely redesigned and is now reminiscent of the Honda Jazz’s dash. It gets a more angular design which looks a lot more upmarket than before. The dashboard has been tastefully finished in black and beige with piano black highlights and silver inserts. The steering wheel is the only thing that has been carried over. A new 2-DIN audio system with Bluetooth connectivity takes centre stage with the new auto aircon unit placed below it. There’s also a cool looking instrument console with brilliant blue lighting and a new circular MID. Spacious and comfortable seating for 4-5 and a cavernous 400 litres of still remain the highlights of the car. Our only grouse here is the underwhelming plastic quality of some of the components and the lack of telephony controls on the steering. Otherwise, the new Honda Amaze is now a much better place to be in. 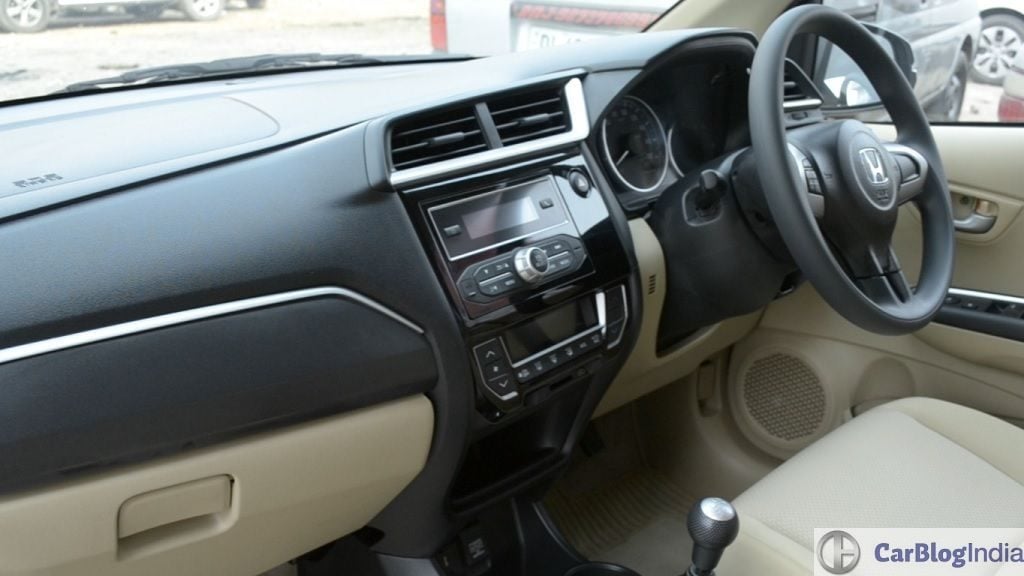 Mechanically, Honda hasn’t changed much except for the addition of a CVT to the petrol model. However, we tried out the diesel were pleasantly surprised by the noticeably lower NVH levels. The engineers have done well to contain the diesel clatter filtering into the cabin, but it still doesn’t feel as refined as it should. On road mannerisms are pretty impressive as the Amaze manages to strike a good balance between comfort, ride quality and handling. Low-speed comfort is decent, but the ride quality gets better as the Amaze picks up speed. At low speeds, the steering is light and easy to use, but it doesn’t weigh up as much as we would’ve liked it to at higher speeds. 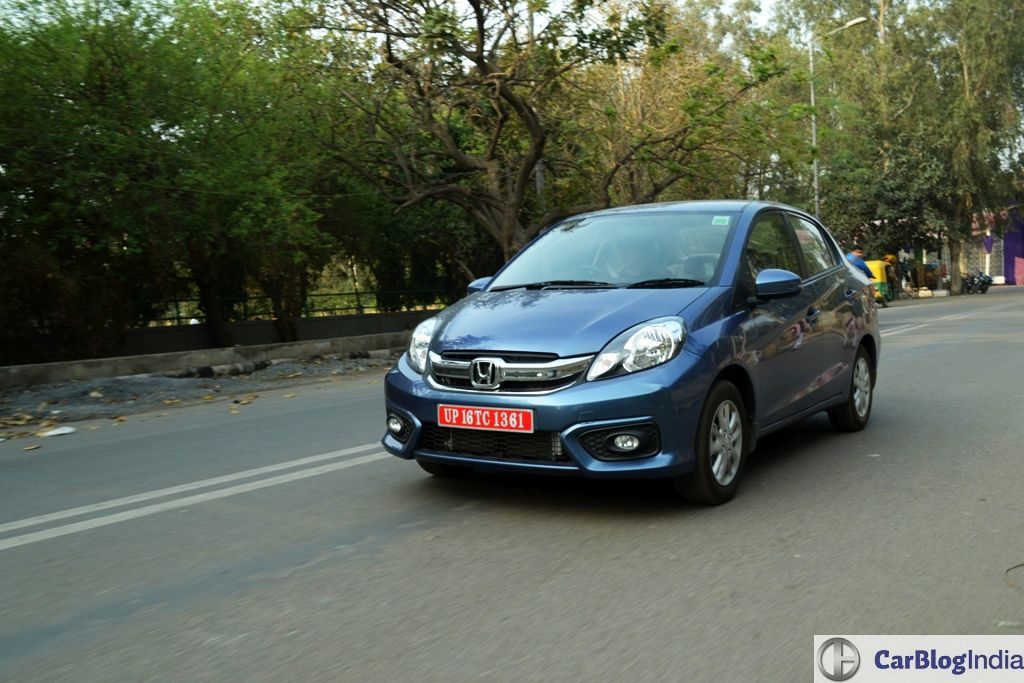 Under the hood, you will find the same 1.5 L i-DTEC diesel as before that puts out a very healthy 100 PS of max. power and 200 Nm of peak torque. Performance is very impressive as the punchy diesel motor offers very good mid and high range. Gearbox duties are handled by the familiar 5-speed unit, which has been geared well for the city as well as highway use. The claimed mileage stands at 25.8 kpl, which means extracting 20-21 kpl from the diesel Amaze shouldn’t be a problem.

Honda’s brand value and reputation ensured the Amaze managed to outdo most of its competitors in terms of sales. With the 2016 edition, Honda has taken the car up another level having gotten rid of most of the major issues. It is still the same spacious and comfortable sedan as before, which now comes with a more mature exterior and well-designed interiors. A starting price of INR 5.30 lacs topping off at INR 8.20 lacs for the top of the line diesel trim ensures it remains competitive. Sure, it’s not the prettiest, or very engaging to drive and even the features list could have been more extensive, but as an all-round package, it makes a lot of sense. Basically, what Honda has done with the 2016 Amaze is made an already good car even better. 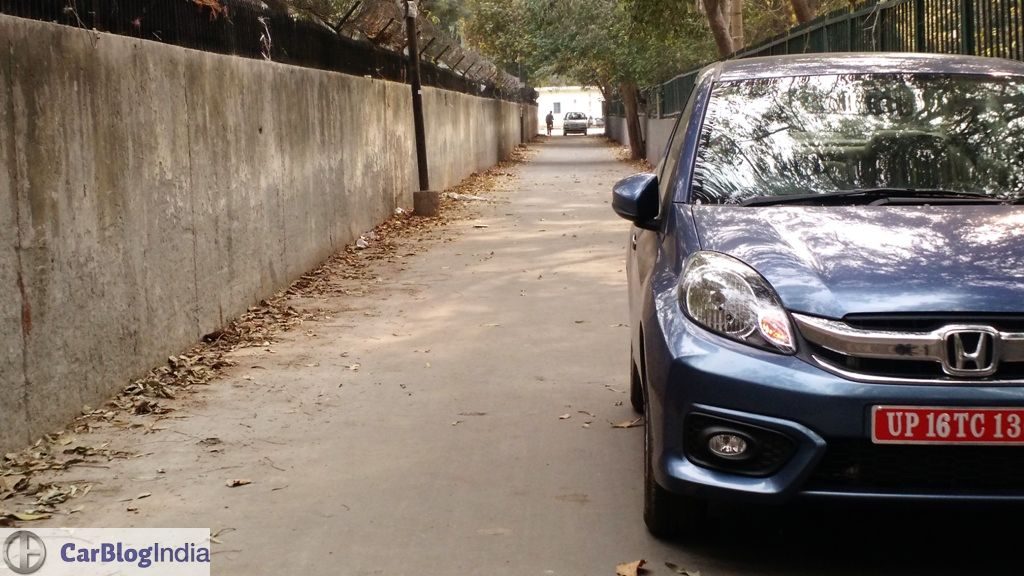