India’s largest carmaker, Maruti Suzuki, has just launched the much-awaited Swift in India from Rs 4.99 lakh, ex-showroom. The third generation of the Swift has made its public debut at the Auto Expo 2018. It is based on the company’s new platform seen in the Ignis as well as Baleno range. The all new Maruti Suzuki Swift is powered by the tried and tested 1.2 litre petrol as well as the 1.3-litre diesel units, however, for the first time, the hatchback gets the option of AMT or Automated Manual Transmission for both engines as well. Of course, it even offers more features, a better interior and a higher mileage. 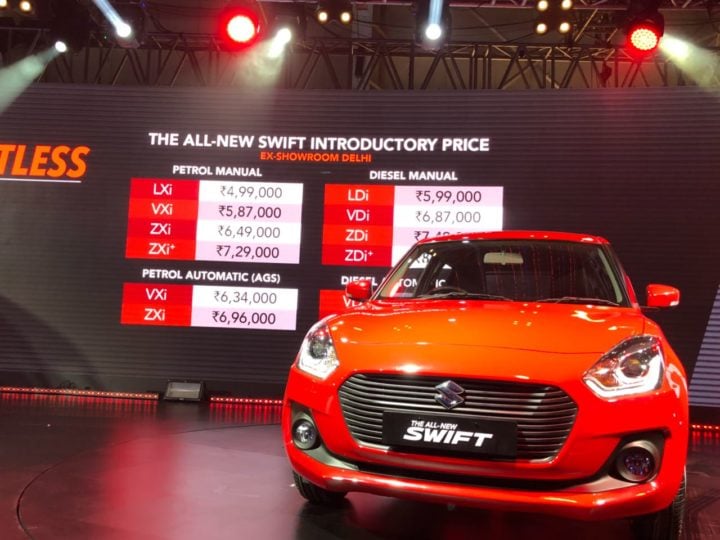 As you can see in the new 2018 Maruti Suzuki Swift images we have on this page, the new model boasts a completely new design with evolutionary styling features. Even the interior is all-new and offers more space and features. As you can see in the images, the lack of Maruti badges hints that the new car will be sold thru Nexa dealerships.

The All New Maruti Suzuki Swift has a base price of Rs 4.99 lakh. The fully-loaded Diesel model costs Rs 8.29 lakh.

The 1.2 litre petrol engine of the all new Maruti Suzuki Swift generates 87PS of power 115 Nm of torque while the 1.3 litre diesel unit produces 78PS of power and 190 Nm of torque. Both engines would also be offered with a 5-speed manual gearbox alongside the AMT units. Standard safety features that would be available in the new Maruti Suzuki Swift would include ABS as well as dual front airbags.

The all new Maruti Suzuki Swift is based on a new platform that is much lighter. It will weigh around 840-900 Kg, which means fuel efficiency will definitely improve. Expect claimed mileage figures of the diesel Swift to hover around the 26-27 KMPL mark.

Stay tuned for more updates on the all new Maruti Suzuki Swift 2018 model.