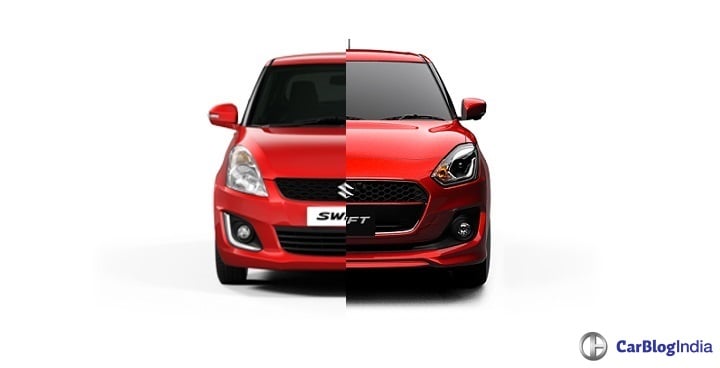 There is no denying that the 2017 Maruti Swift’s design has the essence of the original supermini. While the styling is more evolutionary than revolutionary, the 2017 model looks sportier and more premium. The basic silhouette has been carried over from the old model and the DLOs of the two generations are largely similar. However, the 2017 Maruti Swift features many new design elements that help it to look matured and sophisticated. The front of the car sports a gaping hexagonal grille that imparts a sporty character. The bumper features large intakes and a rather discreet splitter. The headlamps look a lot sleeker and the top variant will feature a projector setup and LED DRLs. The 2017 Swift’s front fenders resemble those of the new Baleno.

Akin to the old model Maruti Swift, the 2017 version has blacked-out pillars. However, the 2017 model gets a ‘floating roof’ effect thanks to the black-out portion of the C-pillars. The tail-lights are slightly smaller and the boot-lid less curvaceous but the loading lip could be significantly lower. The rear windscreen seems to have grown in size. Also, the new Swift features C-Pillar mounted rear door handles. Top end variants will get LED tail lamps.

The interior of the 2017 Maruti Swift looks much sportier and more premium. The dashboard looks more upmarket. The rectangular AC vents have been replaced by round ones. The centre console features a Smartplay infotainment system and circular HVAC controls. The steering wheel is new and looks sportier due to the round boss. Another highlight is the twin-pod speedo console that also features a larger, high res Multi-Information Display (MID). 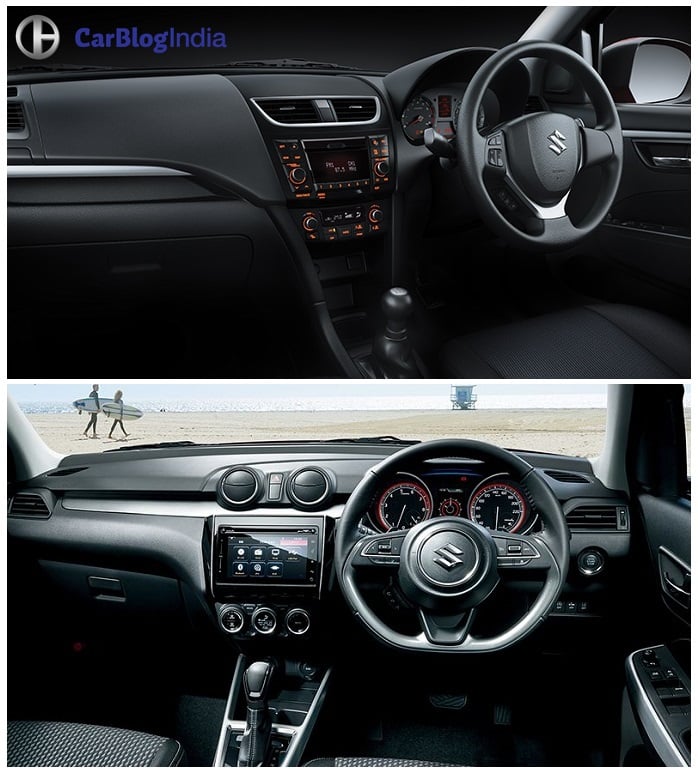 Also See – Baleno vs i20 vs Jazz vs Polo

The Maruti Swift is presently sold with a 1.2 L K-Series Petrol and a 1.3 L DDiS Diesel engine. The Petrol engine displaces 1197cc and features Variable Valve Timing (VVT). Peak power-torque is rated at 84.3 PS-115 Nm. The Diesel engine pumps out 75 PS-190 Nm. The engines come mated to a 5 speed Manual transmission. For India, the 2017 Swift will share the engines with the old model. However, Maruti might offer a 5-speed AMT as an option on both petrol and diesel versions. Also, safely expect the engines to get a new tune for performance and mileage optimisation.

The new model 2017 Maruti Swift benefits from a light-weight platform, which would ensure a lower kerb weight and hence sprightlier performance and higher fuel mileage. Talking about the fuel mileage, the Diesel Swift 2017 could deliver up to 27 KMPL! Internationally, however, the 2017 Swift will get a 1.4 L Boosterjet petrol engine to replace the old 1.6 L engine. This engine has a max. power-torque output of 136 PS-220 Nm. India could get the smaller 1.0 L Boosterjet Petrol engine that powers the Baleno RS. India could also get the ingeniously developed 1.5 L Diesel engine at a later stage.

The new Swift is actually shorter than the current car, but thanks to a longer wheelbase, it will be more spacious. Also, it gets a bigger boot. 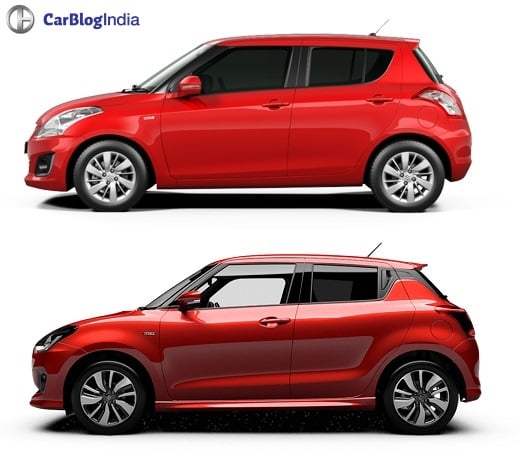 Expect the new Swift to gain certain features across the variant lineup. The list of features on offer should be similar to that of the new Maruti Dzire.

Obviously, the new 2017 Maruti Swift looks a lot more promising than the old model. We really can’t wait to get behind the wheel of the next generation Swift. Seems like the the next model will further build on the Swift’s legacy.