March-03, 2017 – So the new Maruti Baleno hatchback has done something that the long-discontinued Baleno sedan failed rather miserably at, i.e., achieving segment-topping sales figures. However, unlike the Baleno sedan, which has won accolades for being a strong performer, the new Baleno hasn’t really attracted the car enthusiasts and the performance junkies. Now, though, all this could soon change with Maruti launching the Baleno RS – a performance-oriented version that comes packed with a low capacity turbocharged petrol engine. The new 1.0 BoosterJet-equipped car made its India debut at the 2016 Auto Expo. Maruti Suzuki has just launched the new Baleno RS in India. The 2017 Baleno RS has a sticker price of Rs 8.69 Lakh (ex-showroom, New Delhi). Read on for Maruti Baleno RS India price details, specifications, mileage, features and other related information. ALSO SEE- Maruti Baleno RS Test Drive Review

Powering the new Baleno RS is a 1.0-litre Boosterjet engine. It outputs 100 BHP and 150 Nm. The Baleno RS comes with a 5-speed manual transmission. This engine is likely to also make it to the Maruti Vitara Brezza petrol model and the S-Cross facelift. The new Baleno RS is an VW Polo GT TSI adversary.

The Baleno RS comes to us at a time when sales of Petrol-powered cars is fast picking up and more powerful variants are fast gaining acceptance among the car buying lot. The Baleno RS, thanks to its low capacity Boosterjet engine, is high on both performance and fuel mileage.

MSIL shocked everyone with the pricing of the new Baleno. However, the new Baleno RS Boosterjet is pricier than the Baleno 1.2 Alpha. The Baleno RS has gone on sale in just Alpha trim. It has a sticker price of Rs 8.69 Lakh.

The new Maruti Baleno RS marks the debut of Maruti’s all-new 1.0 L BoosterJet engine in India. It’s also the first time Maruti will sell a turbo petrol car. Power output of the India-spec model is 100 bhp while peak torque is 150 Nm. In comparison to the UK-spec model, India gets the Baleno RS in a slightly de-tuned state. Internationally, the Baleno RS benefits from 10 BHP and 20 Nm more. India will get a 5-speed manual transmission, at least initially. However, there have been rumours suggesting Maruti will add a 6-speed automatic gearbox to the lineup as well. The new Maruti Baleno RS is likely to have a top speed of 199 KMPH and a 0-100 KMPH time of under 12 seconds. 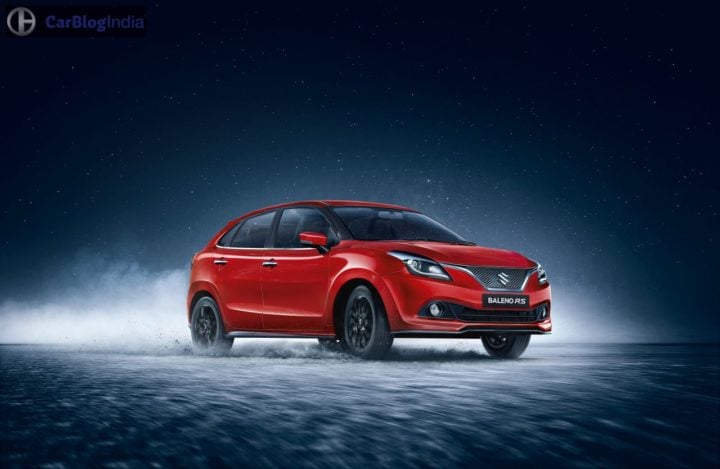 The Baleno has to be the most radical design from Maruti in recent times. Thanks to many bold design elements, the new Baleno does look a lot bolder than its rivals. The car’s ‘liquid flow’ design language puts the latest Suzuki supermini right in the league of models like Hyundai Elite i20. However, the new Baleno does have some design elements that are distinctly Suzuki. The front-end boasts a big V-shaped grille and swept back Swift-like headlamps. Side profile isn’t as bold but does get flowing lines and pronounced wheel arches.

The rear-end has to be the sportiest with bits like LED taillamps and a chunky bumper making the car look pretty stylish. Here are some images of the rear-end. For the RS model, the Baleno hatchback gets the same alloy wheels but finished in black, side skirts, sportier front and rear bumpers. Here are the design highlights of the Baleno RS 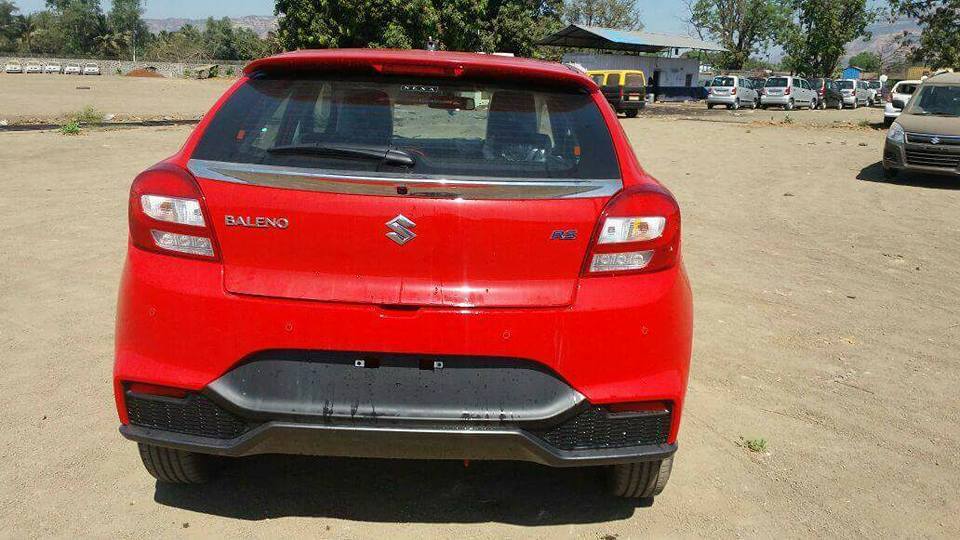 Much like the exterior, the interior is the same. The overall design, the layout, all of it is be the same. However, the Baleno RS gets a revised instrumentation due to the high-performance motor. The new Baleno is a pretty spacious car as it can seat 5 in considerable comfort. Even the boot space, at 339-litres, is pretty generous. The Baleno RS will share the features list with the current car. This means that the Baleno RS model gets features like-

Features list of the Baleno RS is the same as that of the standard Baleno sold in India. Dual front airbags and ABS are standard. Top-end trims get Maruti’s SmartPlay touchscreen AVN, auto aircon, keyless entry and push button start, etc. It could feature a new alloy wheel design (picture below) similar to the UK-spec Baleno.

The new Baleno earlier came with a 1.3-litre DDiS190 Diesel and a 1.2-litre, K-Series VVT Petrol engine. The Petrol engine produces a max. power of 83 bhp and a peak torque of 115 Nm. The engine comes mated to a 5-speed manual transmission. There’s also an optional CVT transmission. The ARAI-rated fuel economy stands at 21.4 KMPL. The Baleno RS gets a 1.0 litre Turbo Petrol engine with 100 BHP-150 Nm of max power-torque.

There should be a definite increase in on-road performance. The UK-spec Baleno RS boasts a top speed of 199 KMPH and a 0-100 KMPH run of around 11.4 Seconds. And at 110 BHP and 170, it also makes more power and torque. There have been reports suggesting the Baleno RS will get a new 6-speed automatic transmission, apart from a standard 5-speed manual. However, at the time of launch, there will only be a 5-speed manual on offer. Fuel efficiency, in comparison with the current 1.2 L petrol, is almost the same. It has an ARAI mileage of 21.1 KMPL

Being a performance-oriented model, the new Maruti Baleno RS rivals the likes of Volkswagen Polo GT TSI and the Abarth Punto.

Also See – Baleno vs i20 vs Jazz vs Polo