Maruti has launched a faster, sportier version of the Baleno hatchback. The new Maruti Baleno RS not only carries all the virtues of the manufacturer’s most premium hatchback yet but also offers a sportier drive. The Baleno RS is a direct rival to the likes of Volkswagen Polo GT TSI and the Fiat Punto Abarth. And the Baleno RS enjoys a significant price advantage over its immediate rivals. However, there’s one car that might end up worrying the boffins at MSIL. Yes, we’re talking about the 1.5 Petrol variant of the new Figo. Equipped with a powerful engine and a Dual-clutch Transmission, the Figo 1.5 DCT is a pretty sporty car. We have compared it with the upcoming Maruti in our Maruti Baleno RS vs Ford Figo 1.5 Petrol comparison post here- 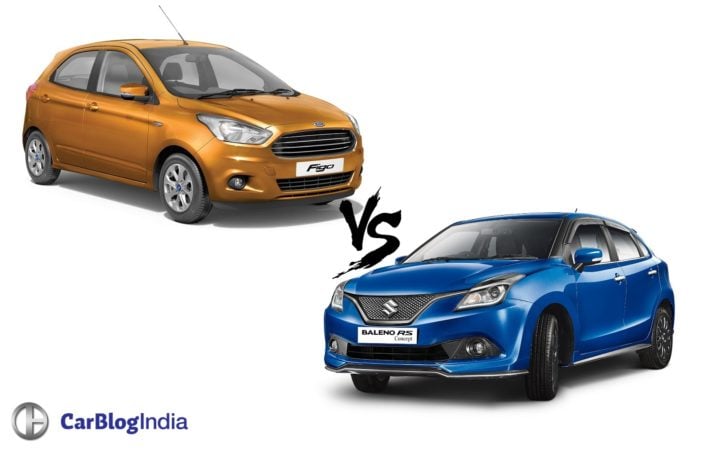 While the Figo offers more power, the Baleno RS has more torque. However, let’s not forget that the Figo 1.5 Petrol offers a 6-speed Dual-clutch Automatic. The Baleno RS, on the other hand, makes do with a 5-speed Manual Transmission.

Mileage- Maruti cars are known to deliver a high average fuel mileage. And the Baleno RS is no different. Compared to the Figo’s fuel mileage of 17 KMPL, the Baleno RS delivers a higher fuel efficiency. However, real world fuel consumption might tell a different story.

Seen above are some images of the Ford Figo 1.5 Petrol and the new Maruti Baleno RS.

Which one would be your pick? Do let us know via the comments section below.