The Maruti Baleno, which came to India last year, might be positioned above the Swift, but it managed to take a fair few customers away from the popular hatchback. Now, the Swift could lose further customers to another Maruti Suzuki product. The car in question is the Maruti Ignis. The new “premium compact” hatchback is likely to appeal to the Indian audience, who seem to lap up anything evenly remotely resembling an SUV. You can read all about how the two stack up against each other in our Maruti Ignis vs Swift comparison 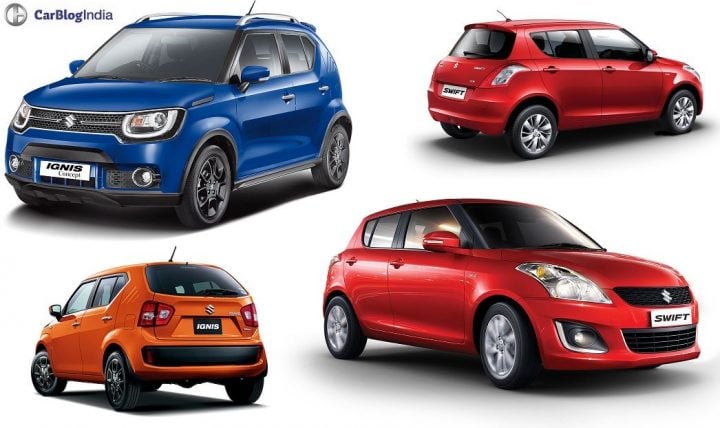 While the starting price of the Ignis is less than that of the Swift, the top end variants of the new car from Maruti are more expensive. That is because top spec trims of the Ignis get more features than the ZXi/ZDi trim of the Swift.

Ignis shares its engine lineup with the Swift/Dzire/Baleno. Which means the Ignis employs the same 1.2 L Petrol and 1.3 L Diesel engines as the Swift in an identical state of tune. Additionally, the Ignis also features an optional 5-speed AMT mated to the 1.2 L Petrol, as well as the 1.3 L diesel. A 5-speed Manual is on offer with petrol and diesel variants as standard. According to ARAI figures, the Ignis is marginally more fuel efficient that the Swift.

The Ignis is shorter but wider than the Swift. It will be taller as well, which could translate to better cabin space. The Ignis also boasts better luggage space.

The Ignis has a claimed fuel mileage of 20.89 km/l and 26.80 km/l for petrol and diesel motors respectively. Even in real world conditions, the fuel mileage figures of the Ignis will be as good as the Swift’s, if not more.

At the Auto Expo, Maruti announced the Ignis will be sold through the Nexa sales channel. Which means it is a relatively premium offering so it comes loaded with features. Highlights include dual front airbags and ABS as standard, LED daytime running lights, projector headlamps, touchscreen infotainment system and more. While the Swift comes with all the essential features, it does miss out on certain ‘premium’ equipment. This includes a touchscreen infotainment system, reverse parking camera, LED DRLs, projector headlamps. However, the next gen Swift due in late 2017 is likely to boast these features.

The only drawback of the Swift’s styling is the fact that it has been around for quite some time now. Those lines still impart a sportiness to the Swift’s exterior that is missing in other hatchbacks. The production-spec Ignis is not too different from the what we saw at the Auto Expo. Bits like the big, chrome lined grille housing the headlamps, LED daytime running lights, etc. should help enhance the Ignis’ style quotient. We feel the SUV-like design of the Ignis will turn out to be hit with India audience.

Maruti Swift comes with an all-black colour scheme for the interiors. While the design, as such, doesn’t stand out, it is functional with good levels of quality all around. The Ignis, on the other hand, gets a rather funky dashboard. We’re seeing a new steering wheel in a Maruti after a really long time. A combination of black and ivory white is what the Ignis’ cabin gets. Body coloured highlights for the cabin are on offer too. Also, Maruti offers the Ignis with a touchscreen infotainment system at least in the top end trims.

First, the Baleno took buyers away from the Swift. Now, the Ignis will, in all probability, do the same. At least, till the new Swift comes out. Maruti’s new Ignis ‘mini SUV’ could turn out to be a huge hit amongst the SUV-crazed Indian audience. Top end variants of the Ignis might be more expensive in comparison, but they offer more in terms of features. Also, the Swift is due to get a replacement by the end of next year. Buyers might shy away from the hatchback because of that.