It all started in 2008, when Tata Motors launched the Indigo CS to make full use of the new excise duty laws from the Government. The Tata Indigo CS became a runaway hit as the fleet market was quick to lap it up. However, it has to be the second generation of the Maruti Swift Dzire that compelled many other mainstream car manufacturers to join the compact sedan brigade. With the likes of the Hyundai Xcent, Honda Amaze, and the Tata Zest already jostling each other on the sales charts, things are bound to get a lot hotter with the launch of the new Ford Figo Aspire. Based on the new generation Figo, the new Figo Aspire is essentially a sub-4m version of the Figo+ sedan that is on sale in South American markets. We drove the new Ford car in and around the majestic town of Udaipur recently and came back pretty impressed. Read on to find out why we think that new Figo Aspire is all one might ‘dzire’ from a sub-compact sedan. Here’s our new Ford Figo Aspire test drive review and a comprehensive image gallery of the new car- 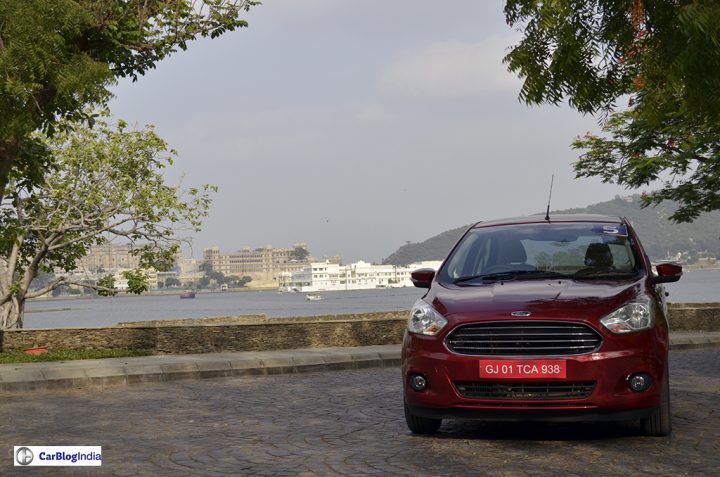 One look at the new Ford Figo Aspire, and you’ll be hard pressed to find a reason to dislike the way this car looks. The exterior design of the Figo Aspire is based on Ford’s much successful Kinetic Design language and the car won’t look out of place when parked with the likes of the Fiesta and the Mondeo. No surprise, then, that the front-end of the Aspire has to be the talking point of its exterior design. The nose of this car is characterized by a wide front grille, which is slightly reminiscent of some premium cars from Aston Martin and MINI. Also, the front-end gets swept-back headlights, which further enhance the sportiness quotient. Moving on, there’s a clamshell-like hood, which gets some interesting surfaces and a discreet ‘power bump’ of sorts. When seen up front, the new Figo Aspire radiates sportiness and unarguably looks a tad more appealing than all its rivals. Overall, it is the front-end of this car that goes on to play a major role in making this car look aesthetically pleasing. 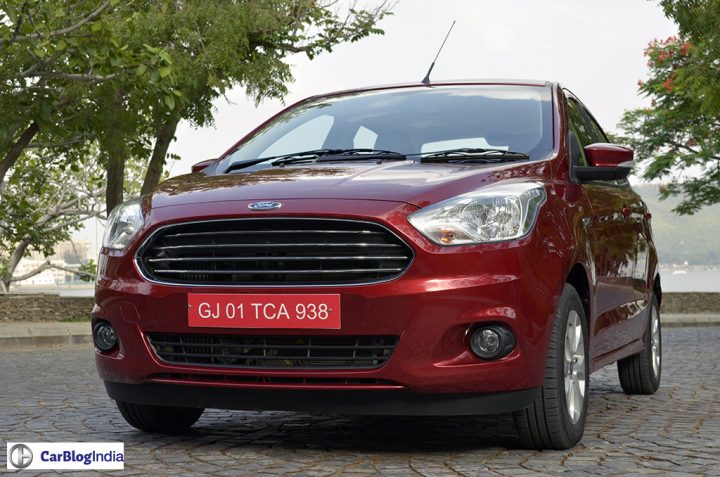 Unlike the likes of Dzire, Amaze and Xcent, the Figo+ sedan was conceived along with the latest generation Figo hatchback. All this means is that the Figo Aspire, which is essentially the sub-4m version of the Figo+, doesn’t suffer from the quirkiness that comes associated with ‘after-thoughts’ like the Dzire, the Amaze and the Xcent. Highlights of the Aspire’s side profile are stylish alloy wheels, blacked-out B-pillars, and rather chunky ORVMs that have integrated trafficators (way more appealing than those cheap-looking ones on the entry-level Amaze variants.) However, it has to be the well pronounced shoulder line that prevents the side from looking bland. True, Aspire’s side profile won’t turn heads, but this car easily boasts of the most proportionate design in its segment. 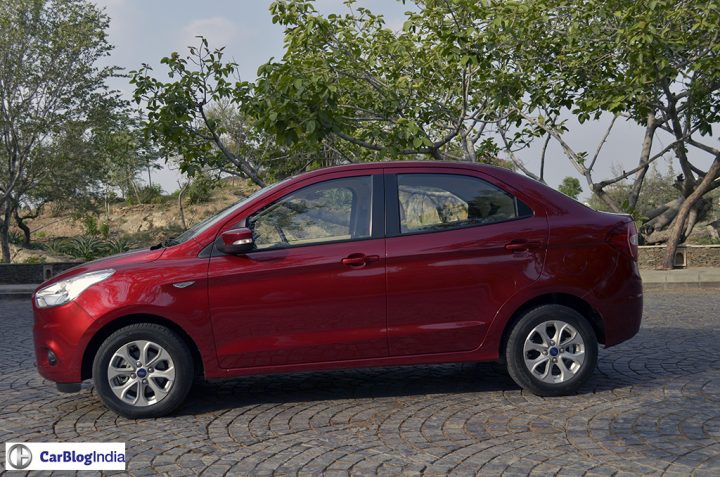 At its posterior, while the Figo Aspire lacks the dynamism that can be found at its front-end, Ford has ensured that the rear-end doesn’t look bland and boring. The boot lid gets a rather discreet integrated lip spoiler and then, there’s a chrome strip too that runs across the width of the boot lid to infuse some ‘premium-ness’ with the rear facade. Our favorite bit, however, is the chunky wrap-around taillights. 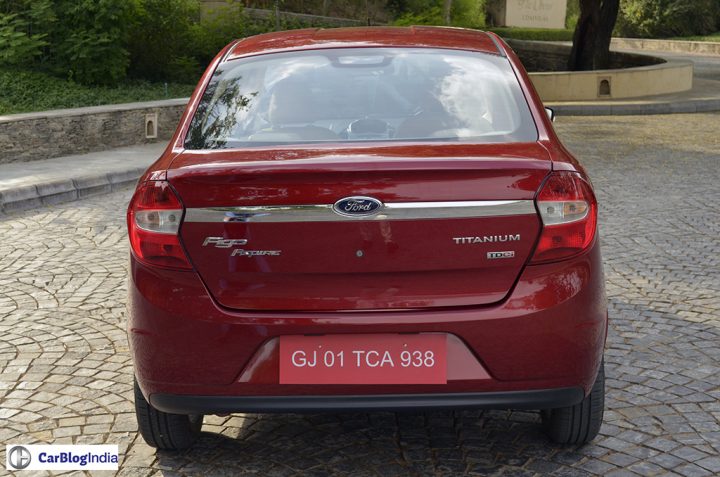 Overall, the new Ford Figo Aspire manages to leave us impressed with the way it looks. True, this is certainly not the most handsome sedan from Ford, but all our excitement is justified by the fact that no other sub-compact sedan looks as well proportioned and as aesthetically appealing as this upcoming entry-level sedan here. 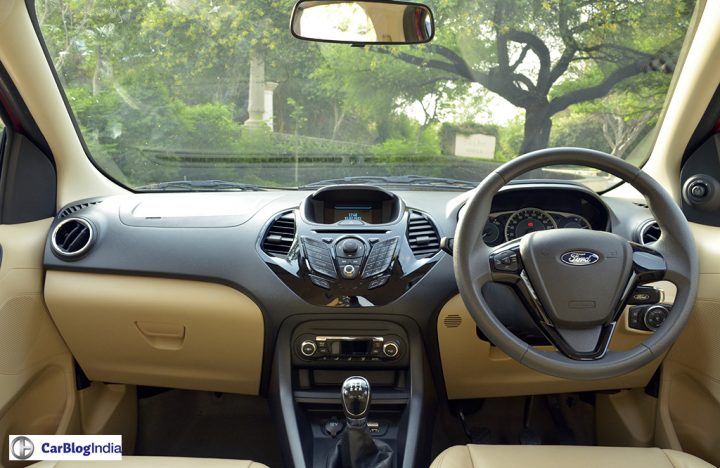 On the inside, the Figo Aspire gets a black and beige color theme, which is something that our country’s beige-loving car buying lot is sure to appreciate. The upper-half of the dashboard gets black plastics with piano-black highlights around the SYNC/Mobile Dock system. There’s also a stylish steering wheel, which again, gets some piano black plastic around the audio/telephony buttons. The cabin is pretty spacious and feels all the more airy due to the beige treatment. The boot , at 357-litre, is spacious enough to carry a small family’s luggage for a weekend trip. The glove compartment is pretty big and the front door-pads can easily store a 1-litre water bottle. However, storage for the rear seat occupants is limited to just the parcel-shelf tray and seat pockets at the back of the front seats. 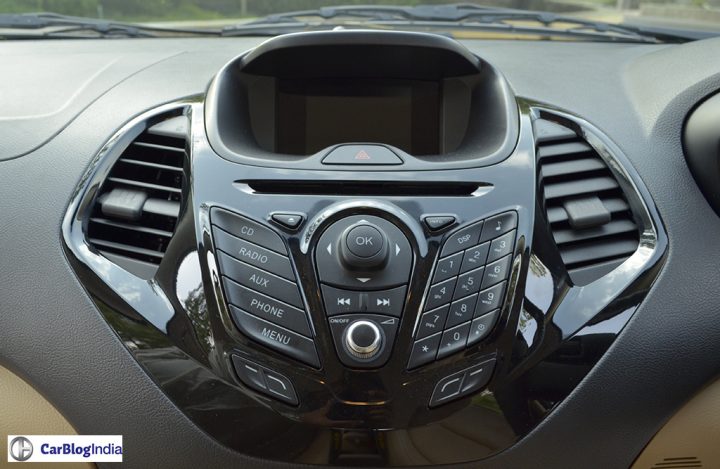 The Aspire will go on sale in four variants, and here’s the feature-wise list of features that’ll be available on the new car – 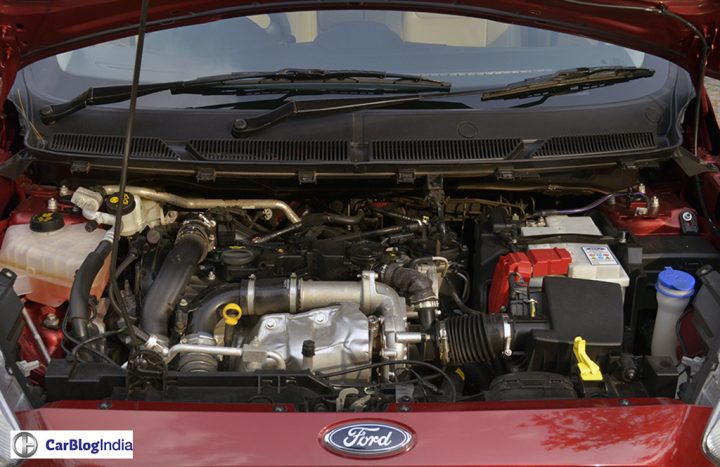 As can be seen in the table below, the latest car from Ford India has got three engine options to offer. While it should be the 1.5-litre Petrol motor that is likely to excite the enthusiasts, the 1.5-litre Diesel, followed by the 1.2-litre Petrol, will bring in the major chunk of sales. We drove both these engine variants and were satisfied with the overall performance of these motors.

The 1.2-litre Petrol engine for the Figo Aspire is based on the same motor that powers the petrol variant of the Figo hatchback that we all know of . However, for the Aspire, this four-cylinder, naturally-aspirated unit has got some major revisions in favour of enhanced fuel economy and performance. This Twin Independent Variable Camshaft Timing (Ti-VCT) equipped engine is sufficiently refined and revs rather freely. However, low-end performance is not its forte and frequent gearshifts are a must in situations like stop-go traffic. It is on the highways where this motor really impresses. The engine makes for quite a sprightly performer and there’s so much juice on offer towards the top-end of the rev-range that one would be hard pressed to not keep this engine on the boil. Top speed, at above 170 km/h, is nothing short of impressive for a sub-4m compact sedan and even the in-gear acceleration is pretty good. The gearshifts, too, are precise and the shift-action is smooth. 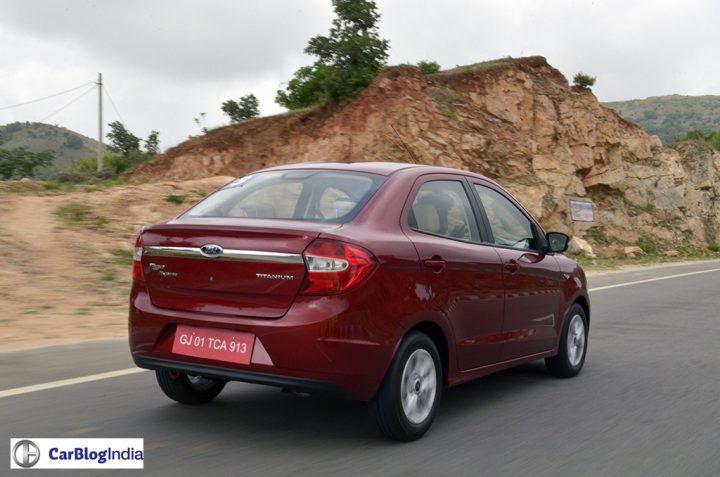 However, among the two engine variants that we drove, it is the 1.5-litre Diesel version that was more enjoyable. This is the same 1.5-litre turbo’ed oil-burner that does duty on the Fiesta and the EcoSport, but has been re-tuned for the Aspire to churn out a maximum power of 100 PS. This might have been done to match the Amaze’s segment-leading power of 100 PS, but what sets the Aspire apart is the way the motor goes on about its business. The turbo lag is minimal and come 1400 rpm, and the Aspire Diesel charges forward with almost a ferocious velocity. The torque is well spread throughout the rev-range and pushing this car to its limit is just too much fun. We recorded a speedo-indicated 185 km/h, which, when compared to the Amaze-D’s top whack of 145 km/h, feels rather stratospheric! The diesel variant is equally athletic even lower down the revs and doesn’t break sweat even when chugging along at 40 km/h in fourth gear, with the tacho needle hovering at a leisurely 1100 rpm. Akin to the petrol variant, gearshifts are precise and the clutch action is light. The NVH levels could have been a bit lower, but frankly, we are almost nitpicking here. 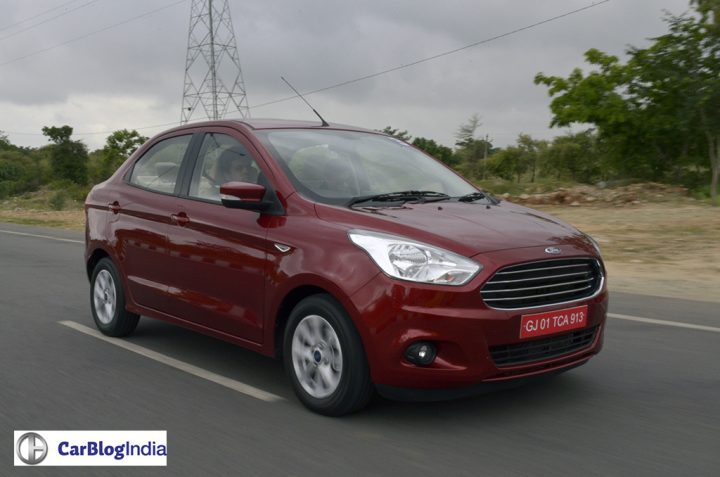 Unlike the Fiesta, which is an outright handler, the Aspire seems to have sacrificed some of the corner-carving skills in favor of a comfortable ride. We tested the Figo Aspire on the splendid highways around Udaipur, which means that we are yet to sample the ride quality on the broken tarmac. However, the Aspire dismissed most of the small speed humps and slightly rough patches of road with quite an aplomb. The car is adept at gliding over most of the irregularities and our guess is that only the biggest of the craters would unsettle this car’s composure. High speed stability is pretty fantastic, especially when you remind yourself that we are talking about a budget-end sedan here. The steering, which is an Electric Power Steering (EPS) unit, isn’t light and offers at least some feedback. However, it doesn’t weigh up well with speed and the performance-enthusiast might be left slightly disappointed here. The top-of-the-line Titanium variant we drove comes with 14-inch rims that are shod with 145/65 rubber. Grip levels are decent and it is particularly easy to push this car hard into a corner. However, like we said, the Aspire is not as sure-footed as the Fiesta, which means that the slightly soft-sprung suspension doesn’t inspire enough confidence for mid-corner corrections. The Figo Aspire gets ventilated disc brakes at front and drum brakes at the rear. Braking is pretty strong and ABS ensures that the car stops in a straight line.

The new Ford Figo Aspire is just days away from its launch and while we’ll be in a better position to give our final word once the prices have been announced, it is rather easy to state that Ford India seems to have got it really right with its first-ever sub-compact sedan. For starters, the Aspire has got a far more balanced design than any of its rivals and we have nothing but good things to say about that sporty front-end! This car has also got a set of powerful and fuel-efficient engines, which should end up pleasing both the enthusiasts and the fuel mileage conscious. And then, there are typical Ford traits such as good high-speed stability, segment-leading cornering prowess and a long list of features. Furthermore, Ford India has assured us that it has done its bit to bring down the maintenance expenses for its cars and the Aspire should benefit from the carmaker’s ‘ever-improving’ after-sales service network. 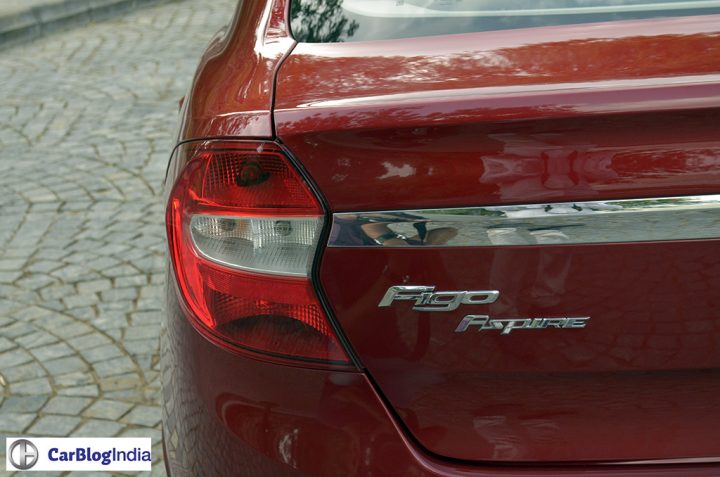 Summing it all up, we won’t be surprised to see this car becoming a big threat to the current segment-leaders.

So, what do you have to say about our Ford Figo Aspire Test Drive Review? Do you think that this car is sufficiently potent to displace the Swift Dzire from the top of the sales charts? Do share your views in the comments section below. Also, stay tuned to Car Blog India for more such reviews.