There have been speculations of Ford India being in talks with the Gujarat State Govt. for setting up their upcoming car assembly and engine plants there. The news have come out to be true and official word is out. There has been an official MoU signed between Ford India and State of Gujarat as per which, Ford will develop a car assembly and engine plant there with an investment of 1 billion US dollars (about 4000 Crore Indian Rupees) which will create about 5000 jobs in the region. The initial capacity of the new plant which will start working in 2014 will be 2,40,000 cars per year and 2,70,000 engine units per year. The new plant will include stamping, body, paint and assembly operations for vehicle manufacturing, as well as machining and assembly operations for engine manufacturing. 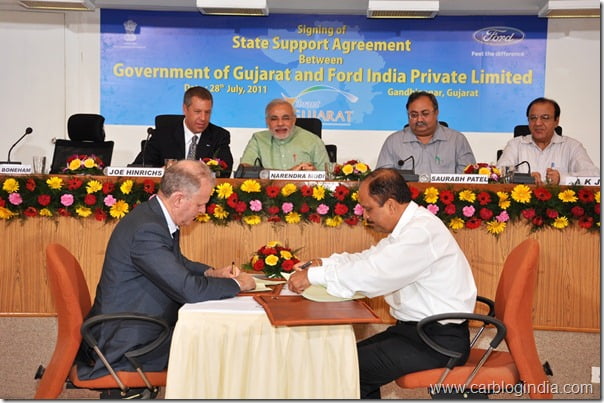 The manufacturing operation will be built on a 460-acre site, with adjacent land protected by the local government in order to attract and locate automotive suppliers within close proximity of both plants. Joe Hinrichs, president and CEO of Ford Asia Pacific and Africa quoted:

“Namaste Gujarat!, We are delighted to announce that Ford’s newest vehicle manufacturing site will be here in Gujarat.  Ford has very aggressive expansion plans in India and in Asia Pacific and Africa, and these two new plants will be important in realizing our growth strategy here in one of the most dynamic regions in the world.”

Ford selected Gujarat because of its pro-business environment, infrastructure, access to ports in northwestern India and skilled workforce. Construction of both plants will begin later this year, with the first vehicle and engine scheduled to come off the line in 2014. In 2010, Ford announced it would bring eight new vehicles to India by mid-decade. Ford currently has a vehicle manufacturing plant in Tamil Nadu and is expanding its engine plant there. This additional investment brings Ford’s total investment in India to approximately US$2 billion.  Currently Ford in India employs more than 10,000 hard-working, dedicated men and women across its manufacturing, global business services and IT operations.

Among the recent successful launched of Ford India are Ford Fiesta 2011 which is loaded with many class leading features in its segment. Also the small car Ford Figo launched in 2010 with both MPFI petrol and CRDI Diesel engine options have transformed the sales figures for Ford India to a large extent. With this new plant, Ford India plans to deepen its roots into Indian automobile industry by bringing world class cars to India with high quality and customer orientation.