Honda’s products  are the ones that are known for perfect quality and ultimate driving pleasure. The market has more a few successful cars from the manufacturer which cover almost every segment including sedan, small car and SUV. The sedan and the hatchback segment are the ones that we are extremely familiar with.

The SUV line-up contains another successful product, Honda CR-V. Recently a news has struck all of us and it is concerned with the only SUV being offered by Honda. The 2012 Honda CR-V crossover is around the corner and will be launched soon and this information is all public on the Honda USA official website. 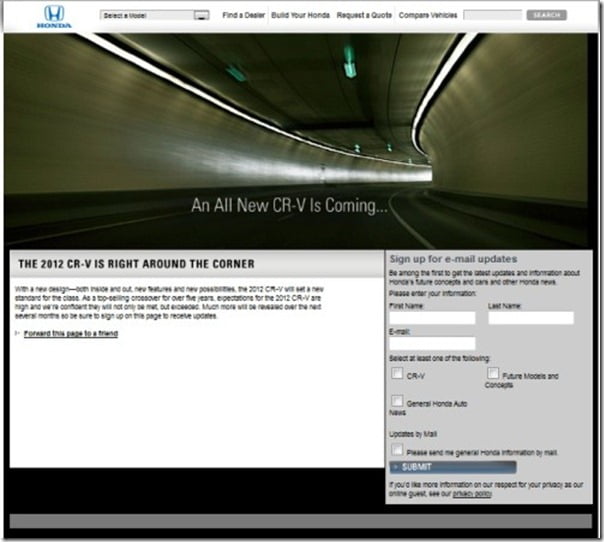 As per the website, the new CRV will be different in design on the exterior as well as on the interior and with the new advanced features, in all probability it would set new standards. Already being a top selling car for five years, a lot of expectations are being drawn from the new 2012 model. The page on the USA website offers a subscription for those who are awaiting this car and wish to get important updates on the same.

The CRV stands in a battleground with amazing feature-packed warriors like BMW X1, Toyota Fortuner, Chevrolet Captiva, and the Renault Koleos and in order to rule the market once again , the company will have to exceed the benchmarks been set by previous models.

Speculations describe the car as entirely different model which would sport a 4-cylinder MPFI gasoline engine developing a maximum power in the range of 185 to 210 BHP. Following the reports over the internet, the car will be slightly shorter than the current version and will be more fuel efficient. Now the success depends on the new CRV model that they have designed & engineered for the global markets and we expect to be at par with its foes.