Ford revealed the all-new 2017 Ford Fiesta late last year. The new model Ford Fiesta was unveiled at the company’s ‘Go Further’ event in Cologne, Germany. It was at this event that Mark Fields, CEO, Ford Motor Co. and Jim Farley, President, Ford Europe introduced as many as four new versions of the new model 2017 Ford Fiesta! While the new Fiesta seems to be a promising car, the company is yet to hint at its India launch prospects. That said, we do expect to see this car at the 2018 Auto Expo. Here’s all that you need to know about the new 2017 Ford Fiesta – 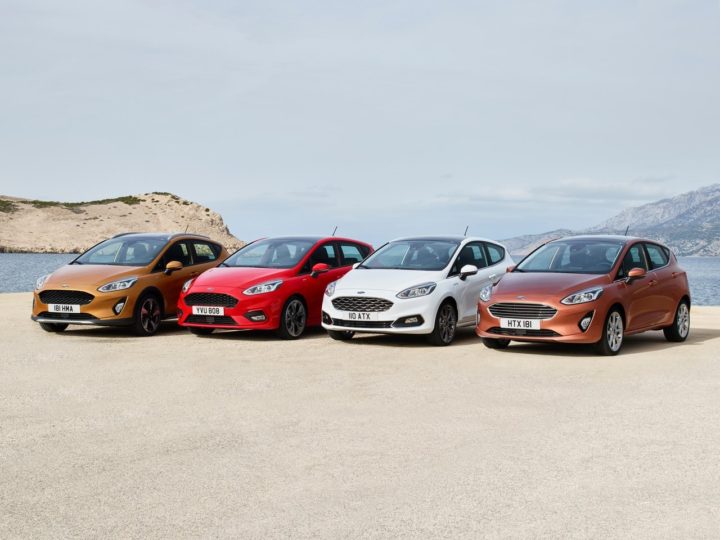 There’s currently no information on the new Fiesta’s India launch. However, like we said, we do expect this car to make it to the 2018 Delhi Motor Show. You can safely expect us to keep you updated with any news related to the new Fiesta’s India launch date. In India, safely expect the car to have a starting price of upwards of Rs 8 lakh. At such a price point, the new Fiesta 2017 will rival the upcoming Ciaz facelift, the new City facelift and the upcoming 2017 Hyundai Verna.

The new Fiesta is powered by Ford’s globally-acclaimed 1.0 L EcoBoost petrol engine that will be offered with new 5 and 6-speed transmissions. Also, the new 2017 Fiesta will go on sale with TDCi Diesel engines that will be high on power, torque and fuel efficiency. We await further details on the engine options. The new Fiesta is underpinned by Ford’s Global-B platform.

The Mk7 Fiesta is significantly better than its earlier generation in two key areas- interior quality and big-car features. The cabin now boasts soft-touch materials, which replace the rubberized finish of the earlier car. The Fiesta also gets a panoramic sunroof to enhance the premium-ness. The car gets a comprehensively updated infotainment system that comes with a new 8-inch touchscreen. The advent of touchscreen has pushed out the 20 buttons from the centre stash. The infotainment unit is loaded with Ford’s SYNC 3 software. Also on offer is a Bang and Olufsen audio system.

The new 2017 Fiesta Mk7 is also a lot safer than its predecessors. Its new anti-collision system detects objects 130 meters ahead and the car automatically brakes to prevent collision in case of a delayed reaction from the driver. Other safety features include-

The Ford Fiesta has been a widely successful nameplate all these years. The outgoing Fiesta has been at the top of Britain’s car sales charts since 7 years now! The new 2017 Fiesta, which becomes the seventh-generation model, will help Ford cement its position at the top. The new car will rival the likes of next generation VW Polo, new Nissan Micra and Citroen C3. In India, if the manufacturer indeed launches a sedan variant of the new Fiesta, it will rival the upcoming Ciaz facelift, the new City facelift and the upcoming 2017 Hyundai Verna.

The new 2017 Ford Fiesta will go on sale in four versions. At the core of this model line-up is the Fiesta Titanium. Also available will be the decidedly tasty Fiesta ST Line and a luxurious Fiesta Vignale. Another interesting version is the Fiesta Active, a SUV-style model to capitalize on the fast-growing popularity of crossovers. All the models are easily distinguishable from each other.

The Fiesta ST Line looks the sportiest of the lot. The Vignale, on the other hand, looks considerably more premium. The Active carries typical SUV traits, such as a high ground clearance. That said, majority of design elements across the range remain common. These new elements, such as the swept-back headlamps, wraparound taillights, trapezoidal grille, come together to put emphasis on the new Fiesta’s increased size.

Stay tuned to Car Blog India for more on the new 2017 Ford Fiesta. What do you think of the new model Ford Fiesta? Do let us know by commenting below.