The new Yamaha R15 V3 India launch could be merely months away from us. The new model made its debut in Indonesia many months ago and we are hoping that the Yamaha R15 would make it to India towards the end of this year. Prices of the new R15 V3.0 are likely to start at Rs 1.32 lakh. Akin to the V2.0, the new version of the R15 is a comprehensive update over its predecessor. The new model 2017 R15 V3 features many new body panels, a new engine, and more features. Going by the popularity that this motorcycle still enjoys, we think Yamaha India has another winner here. You can find out the available details on the 2017 Yamaha R15 V3 India price, launch date, specs, top speed, and other details on this page.

The new Yamaha R15 V3 2017 model not only looks better but also has a more power powerful engine than the current model. The new body panels that the bike features lend it a very aggressive and sportier look. Other than this, the engine is new and displaces roughly 155cc. Of course, it generates more power, which, in turn, leads to a higher top speed. Another important highlight is the introduction of upside-down front telescopic forks. Sadly, the new motorcycle misses out on ABS.

The R15 has been among the most popular motorcycles in its segment. However, the advent of newer rivals has seen it losing some of the limelight. The upcoming V3.0 update, however, should help this bike re-claim the top spot in its segment. The new R15 V3.0 2017 is only on sale in certain South East Asian markets. It is only a matter of time before this new bike makes it to India. The new bike comes with a handful of new features, which include impressive bits like LED headlamps. The most important addition, however, is that of the slipper clutch.

Yamaha India is yet to make an official announcement regarding the launch date of the new V3.0 of R15 motorcycle. However, speculations are rife that the new motorcycle will launch in the coming months. An early November launch date can’t be ruled out. The company is likely to launch the new motorcycle during this year’s festive period. This will help the new model to set off to a good start due to higher demand for new motorcycles in this season.

The Yamaha R15 was first launched in India in 2008. Back then, it took the entry-level performance segment by a storm. This was due to the mini-me R1 looks, high performance, high refinement, and sharp handling. The motorcycle received the V2.0 upgrade in 2012, which brought in an even racier look. Now, it looks like the bike is about to get its most comprehensive update ever. The V3 update will not only make the bike look sportier, but will also bring a new engine and features such as a slipper clutch.

There are fair chances of the new R15 going on sale in two variants. The base price should be roughly Rs 1,42,000. The fully-loaded model cost around Rs 1,50,000. Currently, the R15 has an ex-showroom price of roughly Rs 1,30,000. However, the all-new look, along with a more powerful engine and several new features, should help the 2017 R15 V3 justify the higher price tag.

At this price point, the R15 will become a direct rival to two similarly priced motorcycles. One of them is the excellent KTM 200 Duke, which has an ex-showroom price of Rs 1.44 lakh. This street-naked has a more powerful engine but lacks the sharp handling characteristics and the racy bodywork of the V3.0. Other is the Bajaj Dominar 400. Equipped with a 373.3 cc engine, the motorcycle has an ex-showroom price of Rs 1.39 lakh. The Dominar is far more powerful than the R15, but then, again, lacks the handling prowess and the supersports design.

The major highlight of the specs of this motorcycle is the new 155.1cc, single cylinder, liquid-cooled, 4-stroke engine that features a SOHC head. The new motor outputs a maximum power of 19.04 BHP at 10,000 RPM. Peak torque is rated at 14.7 Nm at 8,500 RPM. The engine boasts bits like forged pistons and DiASil (Diecast Aluminium Silicon) cylinder. The latter enhances the life of the motor. Also, it’s expected that the new engine will offer a higher mileage, in spite of the increase in power.

Suspension duties are courtesy of upside-down front forks and a monoshock with automatic load adjuster at the rear. The new motorcycle gets slipper clutch. A slipper clutch (also known as a back-torque limiter) is a specialised clutch with an integrated freewheel mechanism, developed for performance oriented motorcycles to mitigate the effects of engine braking when riders decelerate.

The new R15 should offer an average mileage of at least 40 KMPL in the urban environment and up to 45 KMPL out on the highway. The new motorcycle is more frugal than the V2.0 in spite of the gain in power. This is due to the several new technologies that the new motor boasts. We believe that the YZF-R15 has always provided an optimum mix of performance and mileage. Well, it looks like things are bound to get even better with the launch of the V3 model.

The new motorcycle has a true top speed of 145 KMPH. This makes the new motorcycle around 20-22 KMPH faster than the V2.0. That’s quite an increase here, no? The higher top speed is due to the new engine that outputs more power and revised gear ratios. The speedo-indicated top speed could be in tune of 160 KMPH. 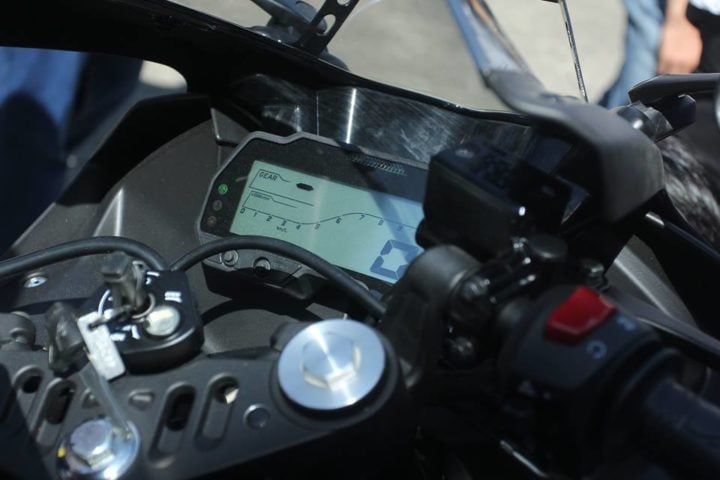 The new 2017 R15 V3 is definitely a generation ahead of the model it is about to replace. The new motorcycle offers an updated Delta Box with an aluminium swingarm. The bike comes with an all-new front-fairing that sports dual LED headlamps. Also, the new bike is longer, wider, and taller than the existing model. The seat height has been raised slightly to offer a more comfortable riding posture. The updated motorcycle comes with upside-down front forks and a rear monoshock. Bits like LED taillamp and a fully digital speedo console further enhance the sportiness of the design. 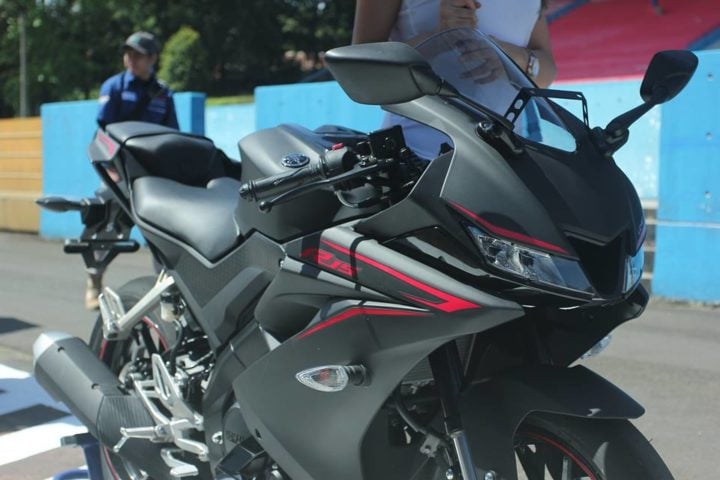 Even the fuel tank seems to be new and better sculpted. It has a fuel carrying capacity of 11-litres. The design of the exhaust is a lot like that of the one on the M-Slaz. It won’t be wrong to say that while the R15 V1 paid homage to the R1 of the last decade, the new V3.0 model looks like a slightly smaller version of the R6.

The new Yamaha R15 V3 is longer, wider, and taller than the V2.0. This further enhances the ‘big bike feel’ that the R15 is known to offer.

Well, the new R15 is definitely leagues ahead of the predecessor. For starters, it looks a lot racier and gets many new body panels. The new motorcycle is longer, wider, and taller than its predecessor. Also, the new model comes with a more powerful engine. The additional power can be attributed to everything from a larger displacement to bits like forged pistons. It is being said that the new model will be more comfortable, too. This will be because or the new pillion seat and a slightly higher seat height for the ride. While the V2 gets conventional front forks, the V3 gets upside-down forks at front. Of course, all this will make the new model more expensive than the V2.0. However, our guess is that the new Yamaha R15 V3 will be able to justify this increase in price through many new bits that it has on offer.

Of course, all this will make the new model more expensive than the V2.0. However, our guess is that the new 2017 Yamaha R15 V3.0 will be able to justify this increase in price through many new bits that it has on offer.

What do you think of the R15 V3? Are you waiting for the new Yamaha R15 V3 India launch of the new 2017 R15 V3.0? Share your views with us by writing them down in the comments section below.