Yamaha R25 Will Be Imported To India

Yamaha has been feeling the heat of the quarter litre biking segment ever since the launch of the likes of the CBR250R because it does not have a single offering in that price range. Its latest offering in the segment, the Yamaha R25 has been launched in Indonesia and has already generated a lot of interest in India too. It is expected that the R25 will do what the R15 did when it was first launched in India in 2008.

The Yamaha R25 will be imported to India via the CBU or CKD route from Yamaha’s plant in East Jakarta, Indonesia. About 1000 units of the bike will be exported from the plant to international markets including India but there has been a delay in executing this plan because of the high demand for the bike in the domestic market. 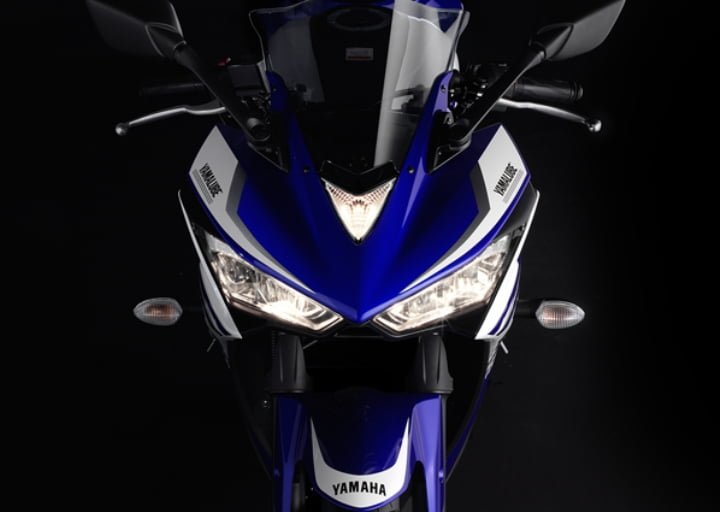 International exports are expected to begin from Indonesia only by the end of 2014 or early 2015, with the bike being sent to as much as 30 countries. It remains to be seen if the R25 will be brought to India via the CKD route or the CBU route; the price of the bike will heavily rely on this strategy and could result in a difference of around Rs. 1 Lakh.

Click the box below to read out comprehensive story on the Yamaha YZF-R25.

A unit of the Yamaha R25 may have been imported to India for R&D purposes. According to a website, a 250cc motorcycle from Yamaha has been imported from Indonesia. The only 250cc motorbike that comes to mind now is the R25, it has been receiving a lot of attention here since it was announced and recently launched in Indonesia. We will wait for a couple of days, the information and spy shots are sure to trickle in soon.

The Yamaha YZF-R25 has been unveiled for Indonesia, it is expected to be launched there in the coming months.

The Yamaha R25 will be unveiled on 20th May 2014 according to a teaser on the company’s Indonesian website. We will be posting news about the bike as soon it is available. 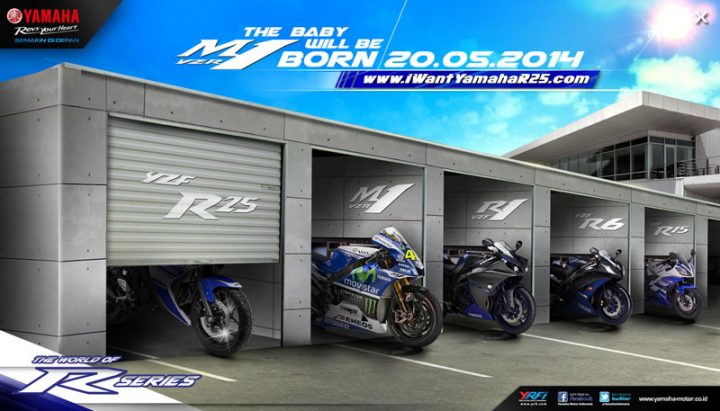 Indonesian customers will also have to the chance of winning an exclusive helmet, more details will available here as the launch date gets closer.

The bike should be launched in India soon after the reveal. Are you excited about it? Let us know in the comments section below.

New photos showing the production ready Yamaha R25 have surfaced from Indonesia. Check out the images below: 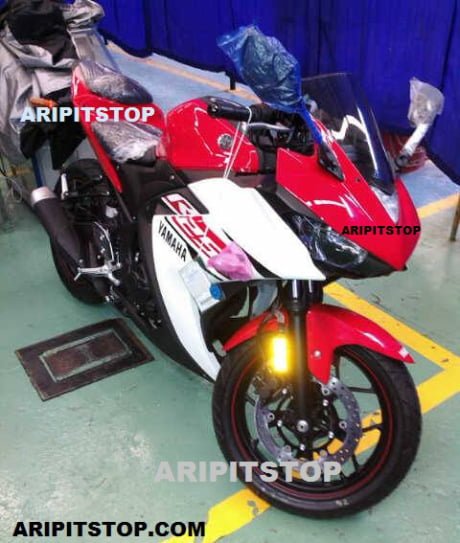 From this angle you can see that the bike has stayed true to the concept in most ways. The front fairing is similar, the wheel design is similar, the huge tank is similar and the split seat design has remained the same. What has been added are the parts that make the bike street legal; this includes split headlamps with a pilot lamp in between, fairing mounted indicators, stylish and sturdy looking rear-view mirrors etc. 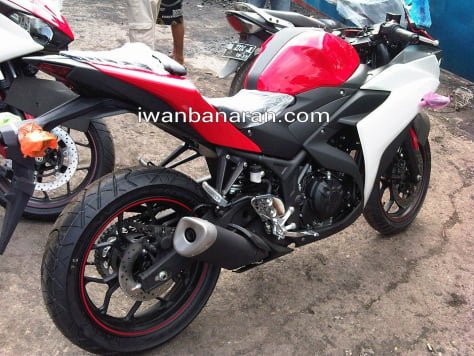 From this angle you can see that the R25 will feature a very sporty rider position with the tank playing a large part. The short tail with the LED stop-lamp, the stubby exhaust can, the disc brake at the rear and the high pillion rider position.

What do you think of the bike? Let us know in the comments section below.

The Yamaha R25 has been spied testing in Indonesia. The R25 was supposed to be unveiled earlier, but for some reason the company has deferred it. The new photos bring back hope that it may be launched in India by 2015, at least by the end of it.

According to the spy photographers the R25 had the following features:

According to a reports by Autocar Professional, the Yamaha R25 is being readied for a launch in 2015. The bike has been in the news since the prototype was showcased at the 2013 Tokyo Motor Show and fans, especially here in India have been eagerly awaiting for the bike which will be the second coming of the famed first-gen R125.

Yamaha has unveiled the Yamaha R25 Concept bike at the 2013 Tokyo Motor Show. The concept is a track-bike which is powered by an all new liquid-cooled parallel-twin cylinder 250cc motor, features an all new frame, and aluminium swingarm among others. The styling on the bike has been inspired by Yamaha’s M1 MotoGP bike, parts like the the huge air-intake at the front etc. may not make it to the production bike. Most of the things that you see on the bike will make it to the production model. 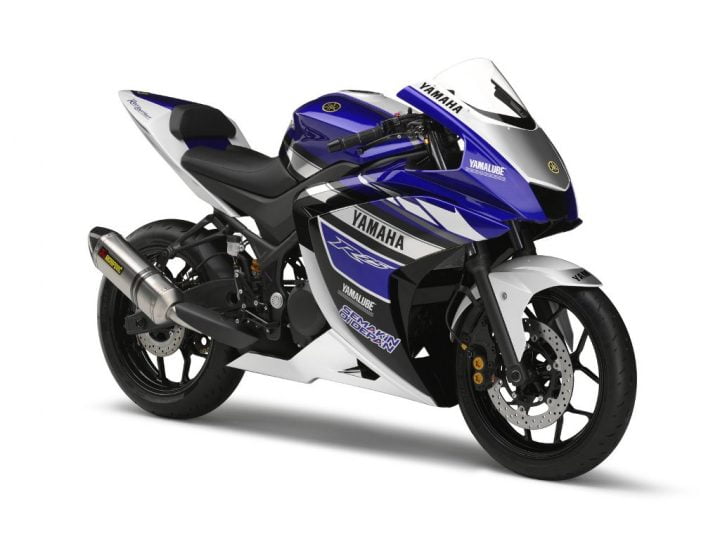 When launched, the production variant of the Yamaha R25 should be pitted against the Honda CBR250R and the Kawasaki Ninja 300. Yamaha hasn’t released much details about the bike, we will keep you posted. 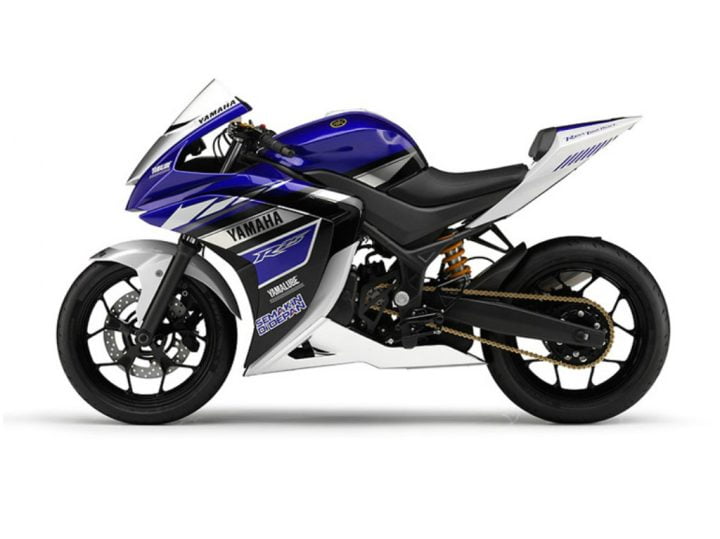 Check out the video below:

Yamaha Indonesia recently held a press conference in which, Mr. Dyonisius Beti, the executive vice president of Yamaha Indonesia stated that the company is developing Yamaha R25 250 CC Motorcycle and it will be launched later this year with the media invites being sent out soon. Yamaha has been slightly late to enter the quarter litre segment but company is expected to make up for the delay with an awesome product that will blow away the competition.

Yamaha has forever been known for the great ride quality and performance their bikes offer and the quarter litre offering of the company shall be no exception. The company raised the bar in the 150cc sport biking segment when it launched the Yamaha R15 and it is expected to go a step ahead with the launch of the Yamaha R25. It is expected to develop around 27-30 BHP with th peak torque being around 24-25NM which would give it some real good performance capabilities.

The bike is expected to borrow a sleww of design cues from the younger sibling, the R125 and that bike in itself is quite the looker. Yamaha India has stated that a quarter litre bike will not hit the Indian roads this year but they have not stated as to what will happen the next year. Markets like India and Indonesia are slowly waking up to performance biking and the quarter litre bikes are surely the ones which introduce you to the world of sport biking.