Skoda Auto‘s upcoming new 7 Seater Skoda SUV based on the VisionS SUV concept was unveiled last year. Initially expected to go on sale under the ‘Snowman’ moniker, the upcoming 7 Seater Skoda SUV, which will go up against the likes of Toyota Fortuner, is called ‘Kodiaq’. The Czech automaker has confirmed that it will launch the new crossover in India sometime in 2017. The upcoming 7 Seater Skoda Kodiaq SUV will be a bigger sibling of the Yeti. Read on for Skoda Kodiaq India launch details, price in India, specifications, etc. 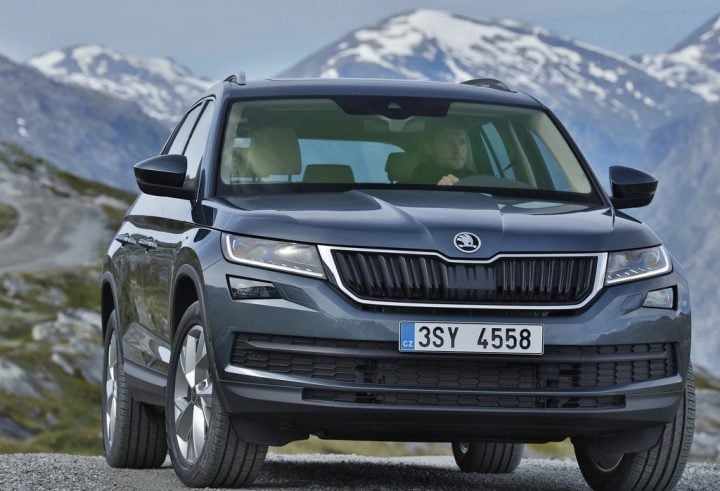 The new 7-seater Skoda SUV first arrived as the VisionS SUV concept at the 2016 Geneva Motor Show. Skoda says that the Kodiaq’s design conveys ‘strength and protection’. The Kodiaq 7 Seater Skoda SUV is based on the VW Group’s MQB platform. The Kodiaq is the biggest-ever SUV with a Skoda badge. The manufacturer says that the ‘Kodiaq’ name comes from ‘Kodiak’, which is a type of bear found in Alaska. For India, the Kodiaq SUV will be assembled at their facility in Aurangabad. 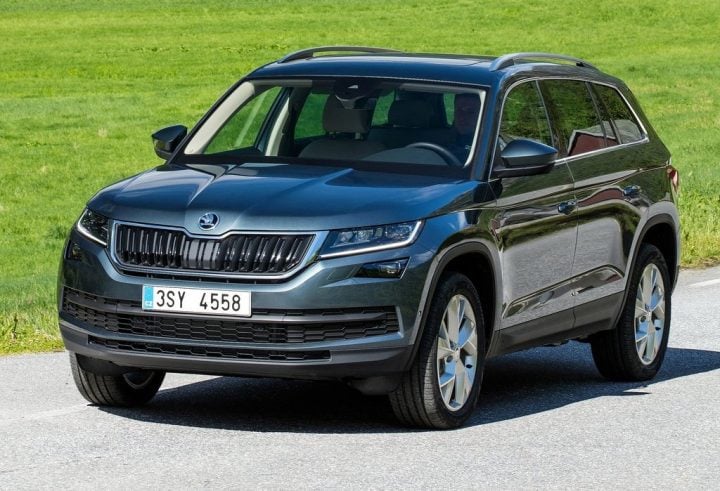 The Kodiaq could have an ex-showroom price of roughly Rs. 27 lakh in India. The top-end model could cost Rs. 32 Lakh. Which means it will go head to head with the likes of the Toyota Fortuner. The high price of the Skoda Yeti turned out to be the biggest drawback of an otherwise capable product. So, Skoda should be looking to avoid doing the same to the Kodiaq at all costs. Skoda will also compete with the parent company Volkswagen’s Tiguan, which will come to in India by mid 2017.

Initially, according to some reports, Skoda was to bring the Kodiaq to India only in early 2018. However, Skoda has now confirmed the 7-seater SUV will come to us in 2017. Test units of the upcoming SUV were spotted recently without any camouflage. Skoda has also listed the upcoming SUV on its official website. 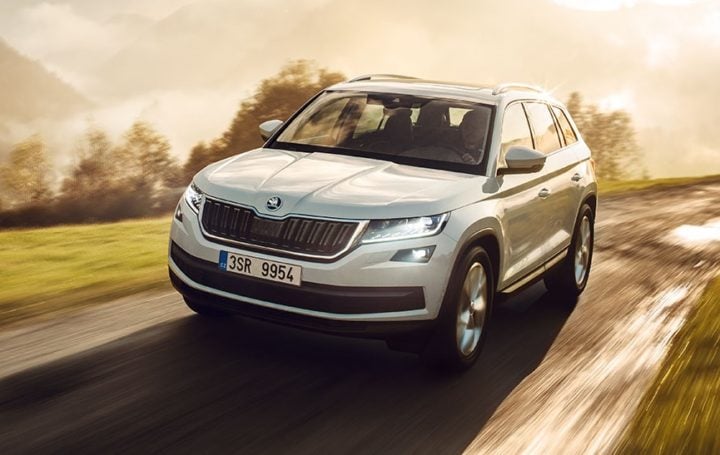 Skoda India is working hard to come up with a new model range in India. Last year, they launched the all-new Superb and Rapid facelift in India. This year, Skoda will launch the Octavia facelift, Octavia RS and the Kodiaq.

In India, however, the Kodiaq is likely to share its engines with the Octavia. It will be powered by a 1.4 TSI Petrol and a 2.0 L TDI Diesel. They will churn out around 150 PS & 250 Nm and 190 PS and 400 Nm respectively. Based on Volkswagen‘s MQB platform, this 7 Seater Skoda SUV is around 4.7 meters in length and has an optional all-wheel drive system. Transmission options will include a 6-speed manual, 6-speed DSG and a 7-speed DSG. The SUV is 4.7 metres in length, which means it is longer than the Yeti. Also, it gets three rows of seats.

Internationally, the Kodiaq will come with a hybrid powerplant, which gets a 1.4-litre Petrol and a couple of electric motors. However, we aren’t too sure if this engine option would make it to India. 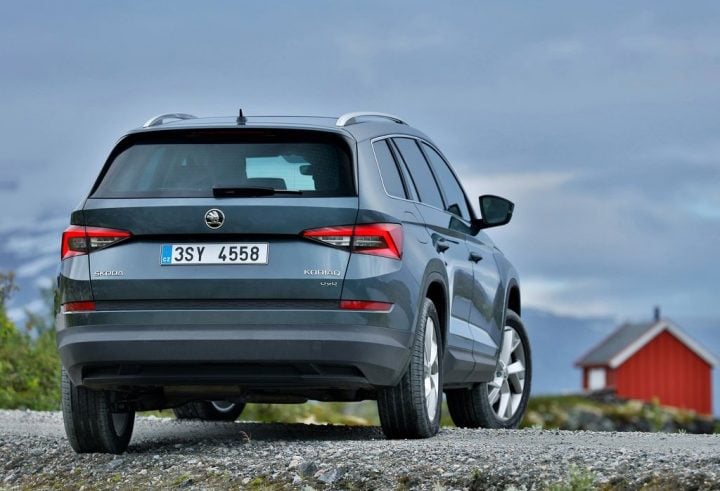 Like we said, the Kodiaq will be sharing its engines with the new Superb and the Octavia. This means that the upcoming Skoda Kodiaq 7 Seater SUV will offer similar mileage figures as well. Fuel mileage of the diesel Kodiaq could be as high as 20 KMPL on the highways. The Petrol model will offer up to 15 KMPL. 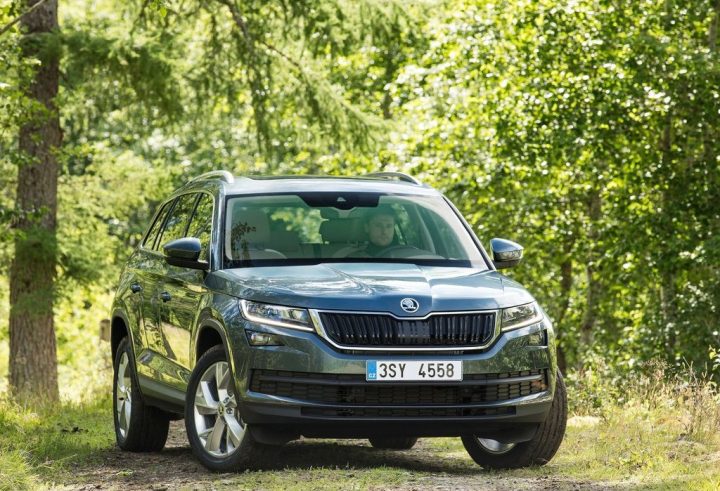 This seven-seater has plenty of space on the inside with three rows of seats as can be seen in the images. Markets such as ours prefer having a third row of seats as an option, a feature Yeti misses out on. Skoda is likely to manufacture both 5-seat and 7-seat variants of the Kodiaq.

Talking about the Vision S Concept, Jozef Kabaň, Skoda Head of Design, said “The VisionS is designed in an expressive, attractive and dynamic way; the design has a balance – typical for Skoda – of rationality and aesthetics. The lines of the Skoda Vision S have evidently been inspired by the tradition of Bohemian crystal glass art and a touch of cubism: all sections are precise, sharp and clean-cut. On the strikingly contoured surfaces, the distinctive play of light and shade creates strong effects that are emphasised even further by the colour Iceland Green.”

The design of the production spec Kodiaq isn’t major departure from the VisionS concept. One glance at the front-end of the Kodiaq, and it becomes clear that the SUV has the definite Skoda nose. In words of the manufacturer, the double horizontal lines running across the hood convey a sense of “protection and strength”. Highlight of the front-end is a trapezoid front grille that is set upright along with four stylish headlights. The headlights boast LED technology. The main headlights get LED Daytime Running Lights.

In its side profile, the upcoming 7 Seater Skoda SUV has a robust touch to it. The highlight here is the greatly recessed tornado line that runs from the upper headlamps and runs across the entire profile. The sloping roofline and the tapered rear-end are some more highlights of the design. The recess for the rear registration plate tapers slightly rearwards. The rear gets Skoda’s signature LED C-motif tail lights, similar to what we’ve seen on the new Superb.

The interior is a reflection of the exterior. The Kodiaq’s interior boasts a ‘democratic’ character, which means equal importance will be given to every occupant. The cabin has been divided very symmetrically.The interior design theme of the Kodiaq interior seems similar to the latest generation Superb. The Kodiaq 7-seater Skoda SUV will come loaded with features. The dashboard, the steering wheel, the instrument console, everything seems to be inspired from the Superb. From the looks of it, there should be ample space in the third row for a couple of passengers.

The concept vehicle sports two large, flat 16-inch screens surrounded by vertically-positioned air outlets. Production-spec Kodiaq might give individual screens a miss. The manufacturer will pay huge attention to the practicality and user-friendliness of the cabin. Not only this, the Kodiaq is also likely to offer voice and gesture-based controls. The seats will be covered in high-quality Nappa leather. The Vision S concept’s steering wheel hub and bits of its centre console are made from hand-cut Czech crystal glass. However, this feature might not make it to the production-spec Kodiaq. But it is sure to get ambient lighting. 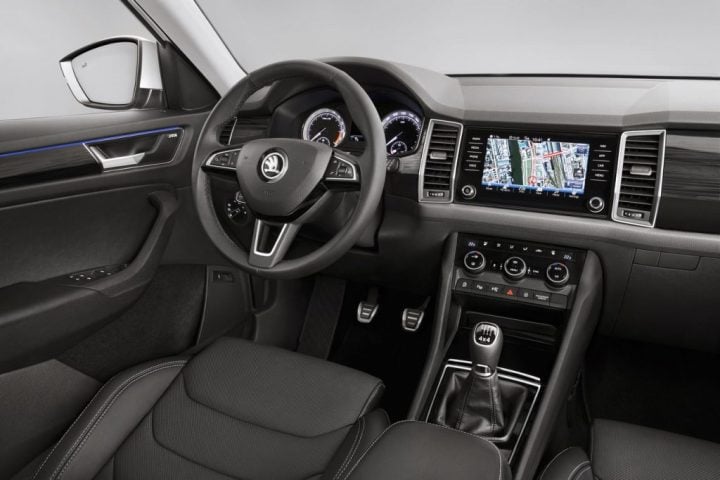 Skoda Kodiaq will rival everything from the likes of Toyota Fortuner to the upcoming Nissan X-Trail Hybrid.

The Skoda Kodiaq Hybrid features a 1.4-litre Petrol engine along with 2 electric motors. The petrol engine delivers 154bhp of power and 250 Nm of torque. The 2 electric motors mounted on the gearbox and rear axle produce 54 bhp and 114 bhp respectively. The combined power output is 222  bhp. However, India will get only conventional engine options. The Petrol engine will be a 1.4-litre unit churning out a max. power of 150 PS. This will come with a 7-Speed DSG. The Diesel motor is a 2.0-litre unit an output of 190 PS. It will come with  6-speed DSG. Both the engines could offer optional 4WD. 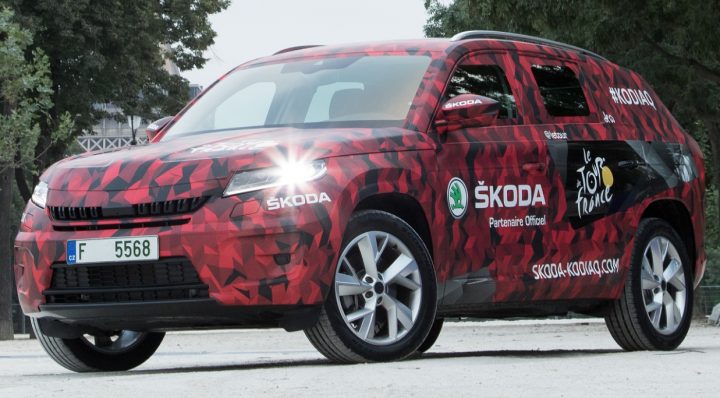 Stay tuned to CarBlogIndia for more on the Skoda Kodiaq – the upcoming 7 seater Skoda SUV. What do you think of the new Skoda Kodiaq SUV? Do let us know via the comments section below.