It was back in the 19th century when the first sightings of the Abominable Snowman or the “Yeti” were reported in Nepal by  B. H. Hodgson. The Yeti slowly turned into one of the most fascinating mysteries of the modern world, cementing a place for itself in pop culture. Skoda decided to pick up the name for its first crossover/SUV, which was launched back in 2009. Riding high on the immense praise showered on it from critics and buyers alike, Skoda decided to bring the Yeti to India. The market for small, relatively expensive SUVs wasn’t big and Skoda knew that, but they were targeting a niche audience. In 2014, the Yeti was given a comprehensive makeover, which also resulted in a significant price bump and, quite ironically, the Yeti became a rare sight on Indian roads. This is something really unfortunate, especially if you consider that this is one of the few products that have come close to being the ‘perfect urban SUV’. Here, in our Skoda Yeti Test Drive Review, we explain exactly why we feel that this car became a victim of the twisted nature of our four-wheeler market. 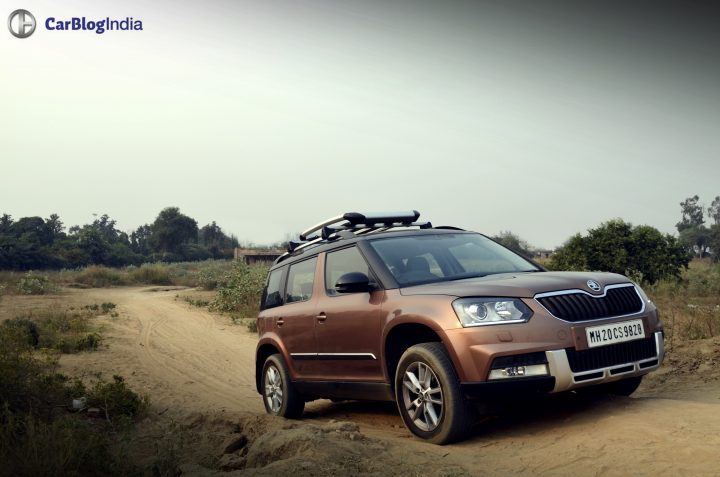 The first thing that strikes you about the Yeti’s exterior are its compact dimensions. While that makes it hugely practical in our crowded urban environment, it is, perhaps, also one of the major reasons for buyers’ unkindness towards the SUV. In its latest avatar, Skoda has given the Yeti a very uncluttered look, doing away with the quad-headlamp combo and replacing it with cleaner, more geometric shapes which are in line with their current design language. The headlamps feature projector units as standard and a neat LED DRL strip at the bottom. The fog lamps return to their conventional place in the bumper. 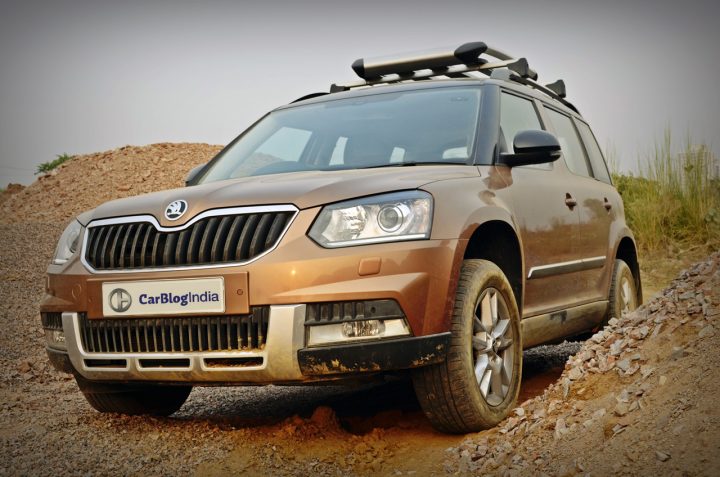 As you move on to the side, its boxy design elements come into the picture. It might not be to everyone’s taste, but it does lend the Yeti a lot of character while maximising interior space, thereby, adding to the practical nature of this crossover. Our unit here looked particularly interesting with the blacked out roof. Another interesting feature is the wraparound window area which starts off from the B-pillar onwards going all the way around the back. The taillamps feature Skoda’s trademark C-motif with LED detailing. The compact dimensions of the Yeti, while highly practical, may not appeal to the general audience, especially in a car costing upwards of 20 lacs, but the wide stance, boxy design and interesting elements like the window areas give the Yeti a very unique exterior and a strong character. 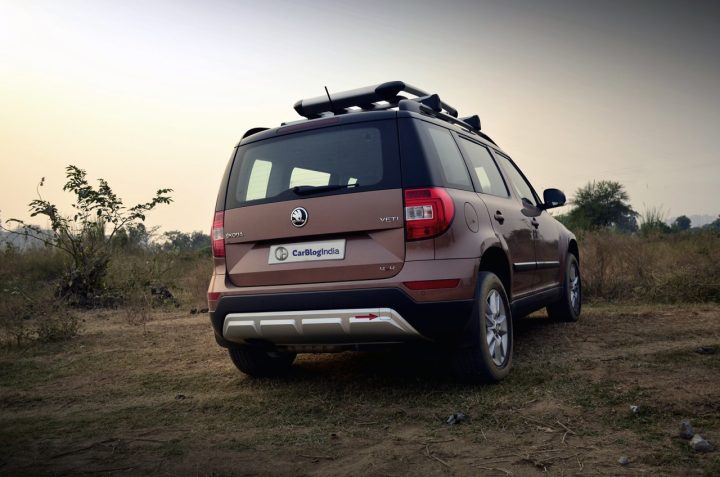 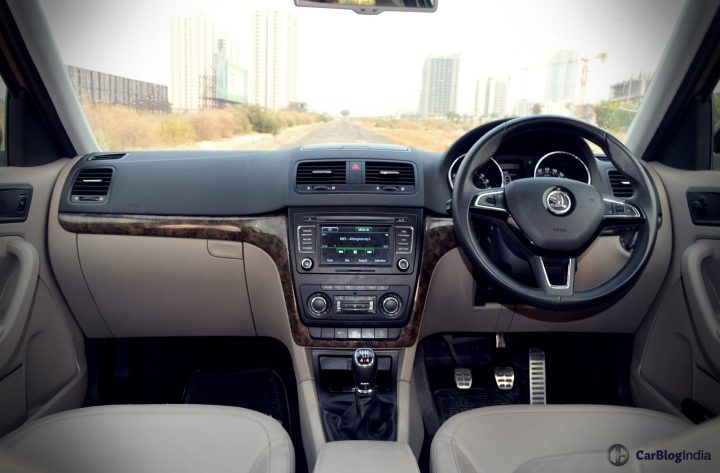 On the inside, you will be greeted by a cabin that is typically Skoda. The uncluttered dash is finished in a very tasteful combo of black and beige with wood inserts. The centre console is occupied by the usual suspects – a touchscreen infotainment system and the controls for the dual-zone aircon. The latter does not feature a digital display as the temp is displayed along the periphery of the rotary knobs. Skoda has draped the cabin in leather upholstery adding to the luxury quotient. The rear bench is split into three offering very flexible storage option. The middle seat, when folded down, also doubles up as a rear centre armrest. There are a few issues plaguing the Skoda Yeti, though. Firstly, the rear seat space is not very generous in terms of legroom. Also, the features list for a car retailing at this price point is not very generous. Another quirk is the position of the bonnet release lever which is placed on the co-passenger side under just below the dashboard. What you get, however, is neatly laid out cabin with high-quality materials and impressive levels of fit and finish. 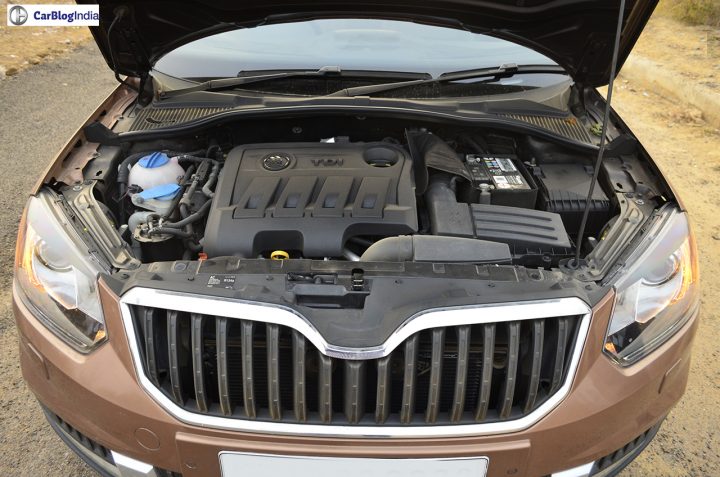 The 2.0 litre Turbo diesel powering the Skoda Yeti is a gem of an engine. The 138 bhp of peak power and 320 Nm of peak torque on offer won’t give you too many reasons to complain. It pulls off well post 1500 rpm and offers a very strong mid-range. That makes overtaking a breeze as the Yeti’s performance int he city and out on the highways will keep you satisfied. With the launch of the facelift, Skoda has done away with the automatic DSG transmission so you get only the 6-speed manual as an option. While the 6th gear is good for cruising along sedately, you would want to keep it in 5th gear if you plan on carrying out some quick overtaking manoeuvres. We drove the 4×4 version of the Yeti which comes equipped with a Haldex 4WD system that engages itself when required. We didn’t really get a chance to try it out as our running was mostly confined to the city. The cheaper, 2WD version features the same engine and gearbox, but produces only 108 bhp and 250 Nm of torque. 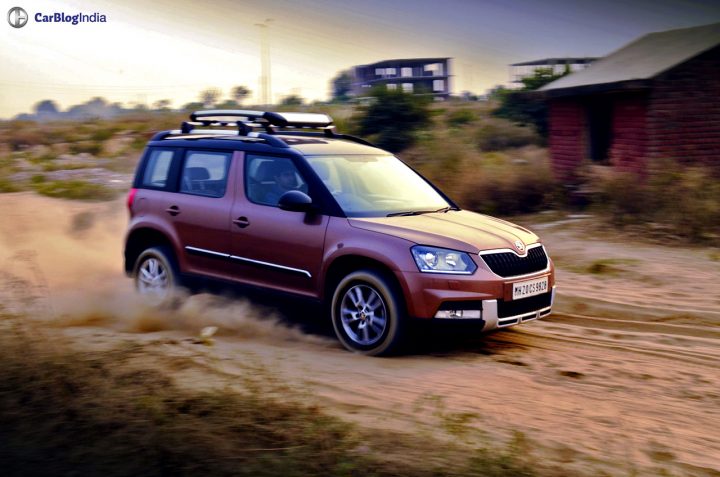 This is another department in which the Skoda Yeti shines. Whether you take this SUV off the road or drive on it, it glides over most surfaces with ease. The Yeti handles beautifully portraying sedan-like composure on the road at higher speeds. There is barely any hint of body roll and it will urge you to push harder handling corners with no difficulty whatsoever. This car loves corner carving and that combined with the brilliant motor under the hood make the Yeti immense fun to drive. It manages to retain this composure even under heavy braking making sure that there are no heart in mouth moments even when you’re pushing the Yeti to its limits. The one small issue is the low-speed ride as jolts from small bumps, especially those pesky plastic speed breakers, filter into the cabin making things a wee bit uncomfortable. That said, the Skoda Yeti offers a near perfect blend of sedan-like handling and SUV capabilities. 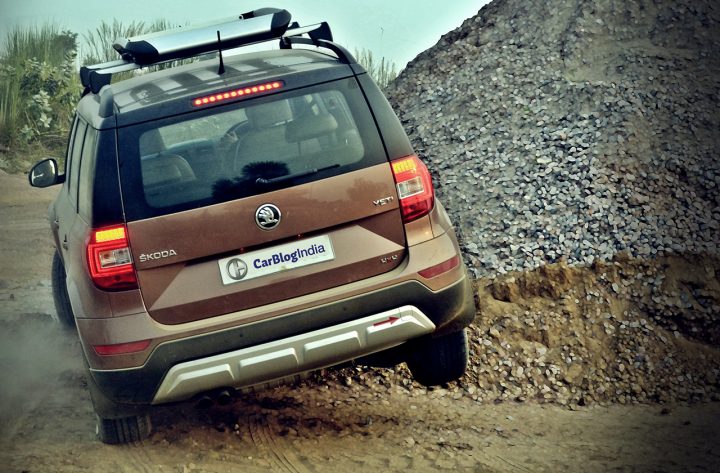 When Skoda decided to bring the Yeti to India they were definitely not hoping to set the sales charts on fire. There are several things that work against this competent little crossover. Perhaps the biggest issue is the price which, at 21.81 lacs (ex-showroom, New Delhi), is a bit too steep. Most people would expect a bigger, more feature-laden vehicle for that kind of money. Then there’s the styling. It might be unique, but the boxy looks aren’t the kind that will be loved universally. The Skoda is for those who know exactly what they are looking for – practicality, style and versatility. Crossovers offering the kind of balanced ride and sorted dynamics the Yeti displays are rare. On weekdays, it proves to be a great companion for those daily office commutes and on weekends you can just as easily take it out for long highway trips and even off the beaten path if you fancy yourself a bit of off roading. Heck, you can even land a chopper on its roof as Jeremy Clarkson once demonstrated. Sedan and SUV all rolled into one neat package, the Skoda Yeti is sure to leave a lasting impression on and keep you wanting more.

Do let us know what you think about our Skoda Yeti Test Drive Review via the comments section below and stay tuned to Car Blog India for latest updates.