Honda Cars India is about to step into the small SUV territory in India, a territory ruled by the Renault Duster until last year and now, the Hyundai Creta. Leading Honda’s charge will be the BRV that was unveiled globally in 2015 and made its India debut at this year’s Auto Expo. A derivative of the Brio‘s platform, the BRV has been specifically designed for markets such as ours, where the HR-V would have turned out to be too expensive. The BR-V has now been launched in India priced in the INR 8.75 lakhs – Rs. 12.90 lakhs bracket. Taking the fight to the Creta and Duster will not be an easy task. The former managed to gather over 1 lac bookings since its launch 8 months back while the latter recently got a major facelift. Will the upcoming SUV from Honda be able to challenge the two? Find out here in our Honda BRV vs Hyundai Creta vs Renault Duster comparison of specifications and prices.

In terms of pricing, there is a difference of around 50,000-70,000 between the Creta and the Duster. Also, the top spec AWD Duster is considerably cheaper than the top of the line Creta that misses out on an AWD setup. Even the Duster automatic is priced lower than the Hyundai giving it a slight advantage in terms of price. Honda priced the BR-V between the Duster and the Creta, but these prices are introductory and likely to go up in the coming months. The petrol  Duster, though cheaper than the Creta, is not available in the top spec RxZ trim. The Duster misses out on a petrol automatic variant and the Hyundai Creta will the be only SUV with petrol and diesel automatic variants.

There isn’t much that will set these three apart in terms of equipment offered once the Honda BRV is launched. However, it will become the only SUV in its segment that will come with a third row of seats, which would add to the BRV’s practicality. All SUVs get dual front airbags and ABS, 2-DIN infotainment setup, auto aircon, alloys wheels, rear AC vents and more. Only the Creta comes with 6 airbags as an option. Honda’s BR-V misses out on a touchscreen infotainment system and reversing sensors or camera.

The Honda BR-V shares its powertrains with the City and Mobilio, which means it is powered by a 1.5 L i-DTEC diesel and a 1.5 L i-VTEC petrol engine. Honda will also offer the petrol BR-V with an optional CVT. The Hyundai Creta gets three engine options – 1.4 L Diesel, 1.6 L Diesel and 1.6 L Petrol. The 1.6 L diesel is available with a 6-speed automatic. Renault offers two engine options with the Duster – 1.6 L Petrol and 1.5 L diesel. The latter is available with either a power output of 85 PS or 110 PS. The 110 PS diesel comes with an optional 6-speed AMT now. As of now, Honda doesn’t seem to have any plans of offering the diesel variants of the BRV with an automatic gearbox, which could turn out to be a disadvantage. Only the Renault Duster gets an AWD system.

Honda seems to have used the Mobilio as the base for the design of the BR-V. However, they have done a good job of giving the BRV its own identity by completely redesigning the front and back ends and raising the ride height as well. The resemblance to the Mobilio is most evident in the BRV’s side profile, especially the kink in the window line. Other design highlights include body cladding all around, projector headlamps, LED pilot lamps, etc. However, it still looks more like an MPV than an SUV. The modifications made to the Duster’s exterior as part of the recent facelift have injected some freshness into the design. It is still one of the most butch looking SUVs among the three. As far as the Creta is concerned, the sharp aggressive lines combined with a bold grille, split tail lamps, etc ensure the Hyundai small SUV is a properly good looking car.

The interiors of the Honda BRV are almost identical to what we have seen on the recently facelifted Honda Amaze. Which is a good thing considering the Brio’s interiors always felt a bit quirky and low rent. The facelifted Duster now features a black and brown interior colour scheme and better quality materials. However, quality is still not up to the mark. Speaking of which, the Hyundai Creta’s interior quality is top notch. It comes with a well designed black beige cabin that impresses in terms of space and quality.

Here’s a comparison table of the ARAI-tested fuel mileage figures of the Honda BRV, Hyundai Creta and Renault Duster –

The popularity of small SUVs is constantly on the rise, a fact that has been highlighted by the stellar sales figures of the Hyundai Creta. The arrival of the Honda BR-V should shake things up a bit. Honda enjoys a very strong brand image in India, which, coupled with the BR-V’s practical nature, should help push sales.

Design – The Renault Duster looks butch, and the recent facelift has added some freshness to it. The Creta features more modern exteriors and interiors. The BRV boasts of a good looking front end and decent interiors. However, there are enough similarities between the Mobilio and the BR-V to make this car look less exciting. Also, the Amaze-like dashboard is a let-down in a car as pricey a the BRV.

Features – All SUVs almost evenly matched in terms of features. The BRV gets 7 seats, which gives it an advantage over the other two. However, it misses out on a touchscreen, parking sensors and reverse camera. Hyundai offers the top-spec Creta with 6-airbags.

Specifications – The BRV will not be available in a diesel automatic variant, something the other two can boast of. Only the Duster is available with an AWD system. Also, the 1.5-litre iDTEC from Honda is unrefined and is a mediocre performer. In comparison, both the Duster and the Creta have better outright performance.

Price – Honda isn’t exactly known for its aggressive pricing, as evident from the prices of the BRV. For now, it is priced between the Creta and Duster, but it will go up in the coming months. 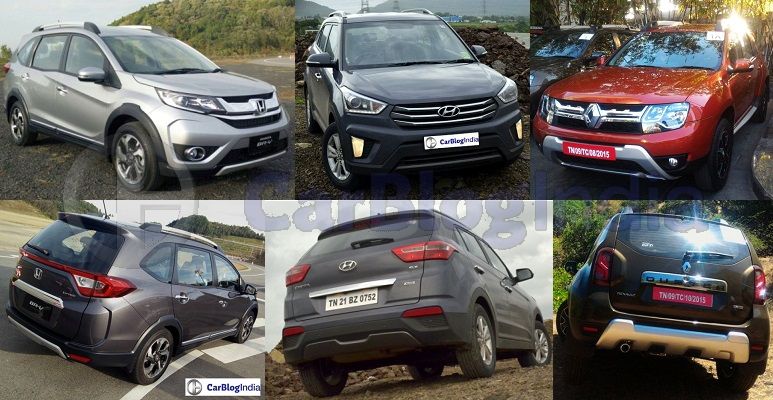 Honda will launch the BRV in India on May-5, 2016. We will be able to give you a more definitive verdict once the official prices and specifications have been revealed.