The Honda City, which was once the undisputed champ in the mid-size sedan segment, seems to be fast losing ground to the Maruti Ciaz. It may be noted here that prior to the launch of the Ciaz, Maruti Suzuki India Ltd (MSIL) couldn’t enjoy much success in this segment. Both the Baleno and the SX4 didn’t sell much. However, all that has changed since the advent of the Ciaz. While we did see the new 2017 Honda City stealing the spot light away from Ciaz soon after its launch, it seems like the buzz around the new look City has started fading. Latest sales chart shows the Ciaz has once again overtaken the City. But is the Ciaz really so good? Let’s find out how the new 2017 City fares against its major rival here in this Maruti Ciaz vs Honda City Comparison- 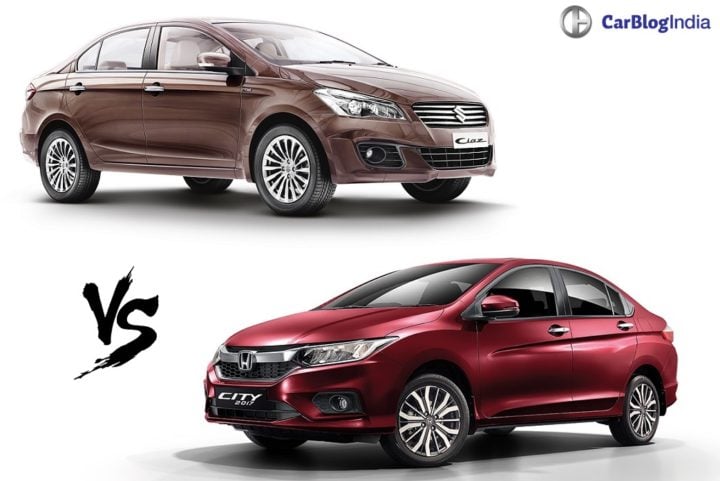 Spec for spec, the Maruti Ciaz is much cheaper than the Honda City. There is a whopping 4 lakh difference between the top end diesel variants of the City and Ciaz. For many buyers, the huge price difference will be reason enough to chose the Ciaz over the City. 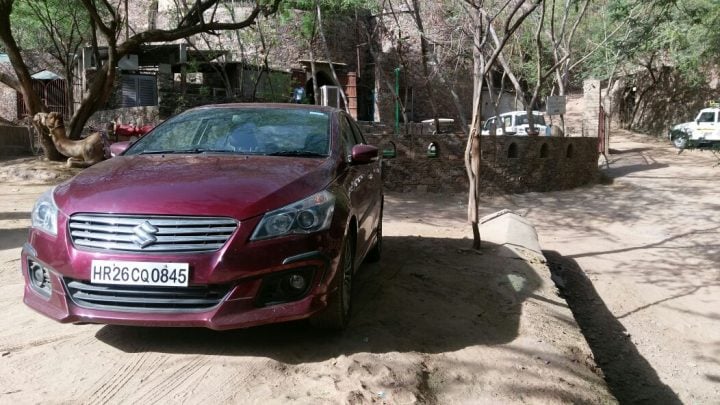 The Ciaz is really very fuel efficient. The Petrol model returns up to 20.73 KMPL with Manual Transmission. Its Automatic Petrol model offers 19.2 KMPL. The Diesel model offers 28.09 KMPL. The Ciaz Diesel is the most fuel efficient car in the country.The new Honda City returns up to 17.40 KMPL on the Petrol Manual and 18 KMPL on the Petrol Automatic. The City Diesel offers a mileage of up to 25.6 KMPL.

All Diesel variants of the Ciaz come with SHVS mild Hybrid technology as standard. This further boosts the fuel mileage of the Diesel Ciaz. Though on paper, the Honda City clearly has more power, clever power delivery and gearing on the Maruti Ciaz means the difference is not that evident in on-road performance. The diesel Ciaz is also faster to a 100kmph than the City. 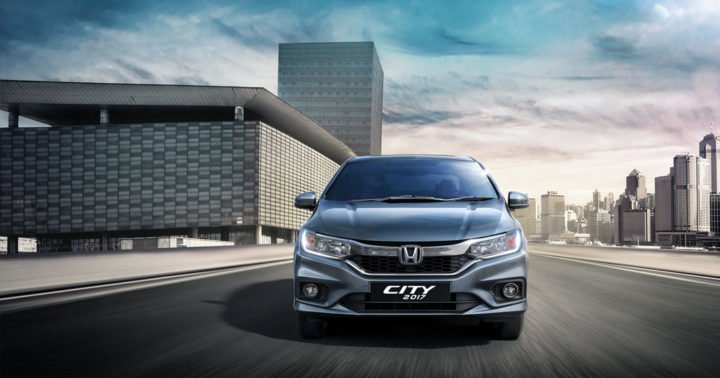 The contemporary three box shape of Ciaz makes it look big and gives it presence. The headlamps with the projector elements look neat and the chrome added to the grille is just about right. It is clear that the designers at Maruti Suzuki have played it safe, with the boldest feature probably being the rear bumper black inserts for the reflectors.

The Honda City, on the other hand, is in total contrast to the Ciaz. The styling is far from conservative with bold lines and a flowing design. The headlamps look nice but the chrome slab on the front grille is a bit of an overkill. But then again, Indian car buyers have always been chrome crazy. The rear bears a striking resemblance to the Ciaz, thanks to identical tail lamps. The Ciaz though, looks better proportioned with 16 inch wheels compared to the City, whose 15 inch tires look undersized.

The contrasting design seen on the exterior continues inside as well. The Ciaz has a simple and elegant interior which looks classy. The City’s interior is futuristic and looks a few years younger. The City gets black interiors with sliver and piano black elements while the Ciaz has a more premium looking black and beige combination. The touch screen panel for the climate control and the red engine start/stop button offered on the City look very cool. The Ciaz is roomier thanks to its 50mm longer wheelbase. There is more space in the back for passengers however, the seats are a bit firm. Both cars suffer from a lack of headroom though.

Though the looks and design of any vehicle is a matter of personal choice, we feel the Ciaz is overall better with its well proportioned elegant exterior and high quality spacious interior.

The Ciaz has better high speed characteristics and feels more planted on highways while the City might tend to roll and pitch a little bit. Cabin insulation is also very good on the Ciaz and the suspension operates noiselessly. The City though, has a sharper steering that offers more in terms of feedback.

Features-wise, the City edges ahead thanks to the recent updates. It gets LED headlamps, LED daytime running lamps, LED taillamps which the Ciaz’s features list does not include. However, both get leather seats, climate control, rear air-con vents, steering-mounted audio and telephone buttons, touchscreens, keyless go, rear-view cameras (though the City does without sensors) and dual airbags. The top of the line variant of the City also features a sunroof, cruise control and paddle shifters for the automatic variant. Except for additional features like cruise control and a sunroof on the top-end City, both cars are identical in terms of features offered.

Maruti, on average, sells over 5,500 units of the Ciaz every month. In comparison, the City’s monthly sales average is around 5,000 units a month. This, even after the increase in sales witnessed after the launch of the facelift. The success of the Ciaz can be attributed to its spacious cabin, frugal engines and the significantly lower price tag. Also, the City’s build quality has suffered since the introduction of the current model. Yet the fourth generation Honda City has sold over 2,00,000 copies in India. But with the Ciaz gaining momentum, the City seems to have already lost out to Maruti’s contender. Also, the initial buzz around the new 2017 City seems to fading fast. After a considerable drop in numbers in March, the Ciaz has once again re-claimed the lost territory in April.

As expected, it is a very close fight and choosing between the two is very difficult as both cars are equally good. However, gun to the head, we would pick the Maruti Ciaz simply because of its classier styling and the more value for money it offers. Factor in Maruti’s exceptional after sales service, and the deal gets even sweeter! We would recommend the Maruti Ciaz due to slightly better looks, lower price and arguably better after sales service. 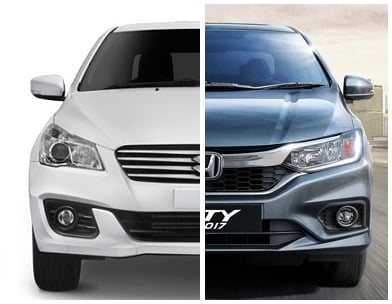